Marriott International's (NASDAQ:MAR) third-quarter 2018 earnings, released on Nov. 5, were notable for a preliminary 2019 outlook that suggests slightly curbed growth in the upcoming 12-month period. Below, let's review top-of-mind observations made by management during the company's earnings conference call, including executives' early thoughts on the company's prospects for next year.

A loyalty integration stumbled, but benefits are starting to accrue

Marriott completed the long-awaited post-merger integration of the giant Starwood and Marriott loyalty programs on Aug. 18. The switchover wasn't flawless, and complications were widely reported on in the press. The company saw an initial 35% spike in calls to its customer service center, although Sorenson noted that customer service calls are now running just 2% to 3% over normal seasonal volume.

Since the process completed, Marriott asserts, it's been enjoying increased booking volume from loyalty members. The hotel operator also reports higher luxury bookings, and rising bookings through digital direct channels. Shareholders can expect to see material effects of the integration -- positive or negative -- quantified by management in Marriott's next quarterly earnings report.

A focus on direct traffic flows

Some distribution channels are just too expensive for the value of the business they deliver. In North America, our revenue management systems now consider these distribution costs when deciding which channels to open on any particular night. This has resulted in a decline in OTA [online travel agency] business during peak occupancy nights and an increase in direct bookings.

While online travel agencies play a vital role in filling available hotel inventory, they also represent lower profitability versus direct booking channels owned by Marriott. As a result of the tweak to the company's revenue management software system described above, Sorenson stated that OTAs as a share of Marriott's business were flat year over year in the third quarter, and dipped in North America. This compressed RevPAR (revenue per available room) growth by "a few tenths-percent," but impacted profitability positively.

Generally, the North American business presents the greatest opportunity for Marriott's revenue management system to reduce inventory to OTAs and encourage direct bookings. As Sorenson explained later in the call, leisure markets, particularly in Asia (Bali is an example), rely on OTAs to generate traffic. This is in contrast to the North American market, in which the company sees a higher proportion of business travelers, concentrations of loyalty members, and much higher brand awareness -- all factors which make it easier to sell room nights through direct channels. 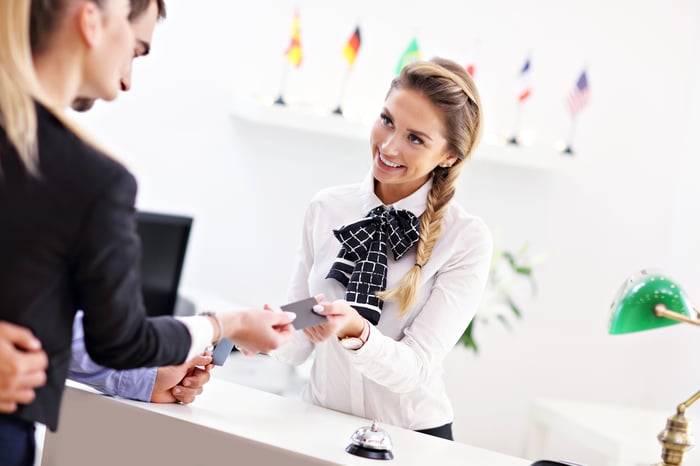 For 2019, estimates for U.S. GDP growth point to a slightly slower pace of growth than in 2018, which benefited from the tax cut earlier in the year. U.S. lodging supply growth is expected to moderate slightly next year, largely due to shortages on skilled subcontractors, higher construction costs, and higher interest rates, despite the continued favorable economic climate. As we consider our 2019 outlook, we note that group revenues on the books in North America for comp hotels in both 2018 and 2019 are modestly higher, consistent with constrained meeting space capacity.

Marriott hasn't issued its guidance for the fiscal 2019 year, but based on preliminary budgeting, the company has apprised investors that it expects systemwide RevPAR to increase 1% to 3% in North America, and 3% to 5% outside North America, for total constant-dollar RevPAR growth of 1% to 2%. As my Fool.com colleague Dan Caplinger points out, this is a rather anemic expansion projection, and it disappointed investors upon Marriott's earnings release.

It's important to note, however, that macroeconomic factors (as described above) are responsible for management's preliminary caution on room-revenue growth. The company's final budgeting process, which incorporates factors Marriott can influence, could shift the outlook in a positive direction. Shareholders should exercise patience and wait for a completed 2019 outlook, due next quarter.

As for the tightening of industry supply growth: Constrained capacity shouldn't evolve into a revenue headwind for at least a year, due to the sheer size of Marriott's room construction backlog, which I described earlier this fall in more detail.

Our asset-light business model is attractive because of its low risk profile, with most of our cash flow coming from hotel base and franchise fees, typically earned as a percentage of the hotels' top lines.

In her prepared conference-call remarks, CFO Leeny Oberg took some time to walk investors through the advantages of the company's capital-light (or "asset-light") business model, which favors the licensing of a broad array of hotel brands and other intangible assets, and the offering of hotel operation services, versus wide-scale ownership of properties.

Oberg reminded investors that Marriott formerly owned a time-share business which once made up one-fifth of its operating income. Since the spin-off of this business into Marriott Vacations Worldwide, the value of time shares to Marriott exists as economic gravy, in the form of a fixed franchise fee the company collects each quarter.

Oberg also broke down Marriott's fee revenue, explaining that most of this income is determined as a portion of hotel revenues. In other words, Marriott earns fees as a slice off the top of hotels' sales -- a much lower risk than deriving revenue based on hotel profitability (that is, net income).

Additionally, incentive fees, which are based on a priority return to hotel owners (and thus are at risk for Marriott in an economic downturn) represent less than 20% of total fee revenue. In short, Oberg illustrated that Marriott's revenue risk profile has decreased considerably over the last few years, a point management wants shareholders to bear in mind should growth indeed decelerate in the coming year.