Stock in the vacations specialist has ascended significantly in a short period of time.

Despite recent market turmoil, Marriott Vacations International Corp. (VAC 5.18%) hasn't given interested investors on the sidelines much of an entry point. Shares of the vacation specialist soared 59% last year, and they're up another 6% year to date. Let's look at a few parameters to try to determine if shares are still within a reasonable buying range.

The company sells vacation ownership interests in the form of real estate interests, called "timeshare estates," as well as "timeshare licenses," which are right-to-use interests. It owns 65 resort properties in the U.S., and nine additional properties abroad. 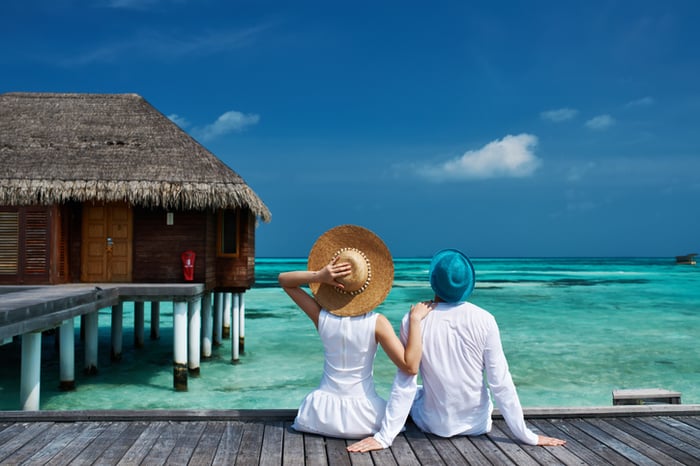 Similar to its competitors, Marriott Vacations derives revenue from four primary sources: sales of vacation ownership interests, resort management, rental of unsold inventory, and financing of customer purchases of vacation products. To get an idea of the relative importance of each service, following is a table of revenue covering the company's first nine months of 2017. I've removed a revenue line item called "cost reimbursements," which washes out each quarter with an identical item on the expense side of the income statement.

Selling vacation time is the company's most significant service, but it has a nicely diversified base of ancillary revenue, which helps produce consistency in its top line.

Marriott Vacations possesses several attributes that should be attractive to investors. The company has steadily increased its profitability since going public, turning profit margin below 2% into annual profit margin reliably in the 7% to 8% range.

It also enjoys a long ramp of global revenue potential, as the bulk of company sales originate from the United States. A key area marked for development is the Asia-Pacific region. Last month, Marriott Vacations opened an extensive new resort property on the island of Bali, Indonesia, the Marriott Bali Nusa Dua Gardens. The organization intends to reap full advantage from a new sales center on the property this year.

As for the company's valuation, since I recently tackled a similar question with Marriott International, it's only fair to use at least part of the same approach, which is to compare Marriott Vacations to an appropriate sector in the overall market.

As with its former parent, the consumer discretionary sector of the S&P 500 Index provides an appropriate benchmark. Consumer discretionary stocks in the S&P 500 Index currently trade at 20.4 times forward earnings, according to Yardeni Research. Marriott Vacations is slightly more expensive than this set of companies, as its present forward price-to-earnings ratio reading sits at approximately 24.0.

Now, Marriott Vacations isn't part of the S&P 500 -- at a market capitalization of $3.8 billion, it's more of a mid-cap stock, unlike Marriott International, which is a member of both the S&P 500 index and the index's consumer discretionary sector. Thus, since it's a relatively smaller company, we'd expect Marriott Vacations to trade at a slight premium to its S&P sector benchmark.

We should also consider the company's valuation relative to its peers. Let's compare Marriott Vacation's enterprise value (EV)-to-EBITDA multiple against Hilton Grand Vacations and ILG. I like this particular metric because it takes an entity's total value, including debt, and compares it to earnings from which non-cash items have been removed.

Using the enterprise EV-to-EBITDA multiple can generate more of an apples-to-apples comparison between companies, despite differences in their balance sheets. Here we see that the market is applying a slight discount to Marriott Vacations versus Hilton Grand Vacations when viewed through the lens of EV-to-EBITDA: 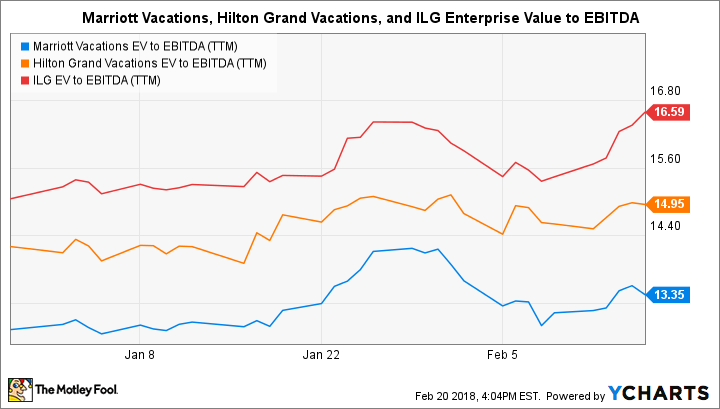 By these two measures, valuation relative to a broad set of consumer-based companies, and valuation relative to peers, we can determine that Marriott Vacations isn't overvalued. More accurately, it can be thought of as fairly valued at present. For investors who maintain ample holding periods, the company may continue to provide solid returns because of its consistent income and expansion potential. Thus, if you have a long investment horizon, Marriott Vacation remains appealing at its current price level.