The U.S. airline giant is also shifting a substantial chunk of its existing orders to the larger A220-300 model.

Delta Air Lines (DAL 2.19%) is the largest customer for Airbus' (EADSY 2.32%) fledgling A220 aircraft program, with 75 orders for the A220-100 as of the end of November. The carrier is scheduled to introduce the 109-seat A220-100 to its fleet early this year as it continues to deemphasize fuel-guzzling, uncomfortable 50-seat jets.

Delta loves the A220

The A220 family began life as Bombardier's CSeries aircraft program. While its larger rivals focused on making improvements to their existing models, the struggling Canadian jet maker took a big risk by developing a clean-sheet design that could offer unmatched performance. In April 2016, it scored a huge win by nabbing Delta as a customer. The U.S. airline giant ordered 75 109-seat CS100 jets for delivery between 2018 and 2021.

Delta has touted the aircraft's potential to reduce its unit costs, as the most efficient small jet in history. It has also noted that the A220 -- which gained its current name after Bombardier transferred a majority stake in the program to Airbus in the face of severe business headwinds -- has wider seats than competing jets, providing a more comfortable ride for customers. 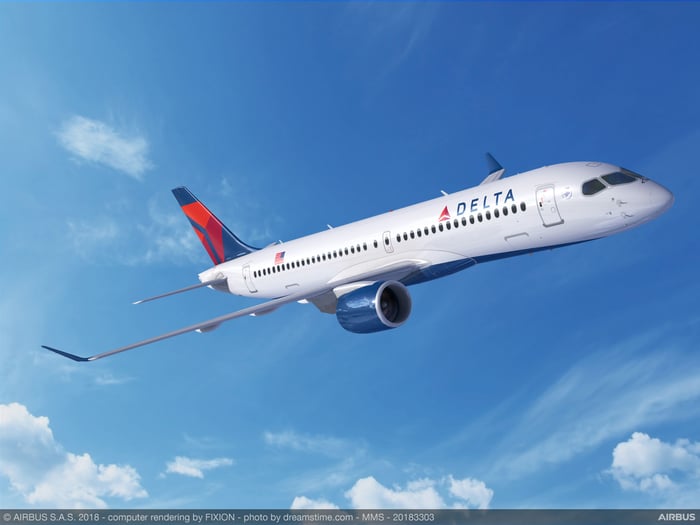 Despite some delivery delays related to a trade complaint filed by Boeing, Delta received its first four A220s in late 2018. It hasn't put them into commercial service yet, but apparently, the carrier likes what it sees enough to commit to an even bigger A220 fleet.

More of a good thing

Delta Air Lines plans to configure its A220-300s with 130 seats, a 19% increase over the A220-100. The difference in operating costs between the two models is significantly less than that. After all, both planes require two pilots, three flight attendants, and more or less the same maintenance work.

As a result, by shifting orders from the A220-100 to its larger sibling, Delta will further its effort to hold nonfuel unit costs roughly flat beyond 2020. And while it's harder to fill all of the seats on a larger aircraft, Delta's big, efficient hubs should minimize the impact to unit revenue from upgrading to the A220-300.

There could be plenty more orders in the future

Some of Delta's new A220s may be used for growth, but most will be used to replace either 50-seat jets that are being eliminated from the fleet or aging MD-80 and MD-90 aircraft that are ripe for retirement. Yet even after those fleet upgrade projects are done, Delta's need for the A220 won't be over.

Delta Air Lines currently operates 91 110-seat Boeing 717s, as well as 57 132-seat A319s. Both fleets have an average age of 17 years, with the oldest planes of those types being about 20 years old. The A220-100 and A220-300, respectively, would be ideal replacements for those older models, offering lower maintenance costs and huge fuel-efficiency improvements.

By the time the current A220 delivery stream ends in 2023, Delta may be ready to start replacing its oldest 717s and A319s. Thus, Airbus can reasonably look forward to plenty of follow-on orders like this one from Delta Air Lines over the next decade or so.