Lots of airline operators saw their share prices plunging in December of 2018. According to data from S&P Global Market Intelligence, household names American Airlines (NASDAQ:AAL) and Delta Air Lines (NYSE:DAL) took haircuts of 20% and 17.8%, respectively. Regional airline Hawaiian Holdings (NASDAQ:HA) stalled even harder, ending the month 34.2% below the prices seen at the end of November.

The sectorwide slide started in the first week of December, when each airline reported passenger data for the previous month and e-commerce giant Amazon.com (NASDAQ:AMZN) launched its own air delivery system.

Amazon's fleet of 40 cargo planes may not look like much of a threat to the likes of Delta and American Airlines at first glance, since the online retailer is unlikely to start transporting passengers anytime soon. But American reported $260 million in third-quarter cargo service revenues, and Delta's cargo sales stopped at $226 million in the same period. These are among each airline's fastest-growing operations, with solid operating margins to boot, so any threat to the cargo business is seen as a roadblock for an important growth opportunity.

On top of that, Hawaiian Holdings posted a disappointing slate of November passenger data that week. In particular, Hawaiian Airlines saw revenue per available seat mile (RASM) falling roughly 4% year over year. Guidance for the period had targeted a 1% drop. Hawaiian is wrestling a surge of new competitors launching services to the islands of Hawaii. 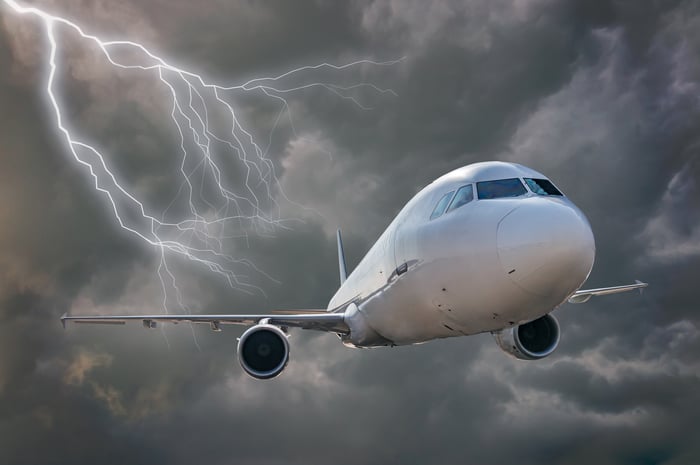 And of course, none of the airlines enjoyed the gloomy economic conditions of last month. The S&P 500 benchmark fell 9.2% in December, setting the stage for some steeper drops in turbulent sectors like this one.

All of these stocks are trading at bargain-bin discount prices. Shares of Delta and American can be purchased for less than 10 times each company's trailing earnings, while Hawaiian Holdings' stock stands at a lowly 4.6 times earnings. Don't back up the truck to this ostensible buying opportunity, though. Low valuation ratios are common in the airline sector, and bankruptcies are not rare. Amazon's entry into the cargo shipments market may bring some real pain, too.

These stocks are cheap for a reason, and I wouldn't bet the farm on a big bounce from these low prices.