Despite a solid quarterly report, Signet Jewelers' (NYSE:SIG) lost 39.7% of its share price value in December, according to data from S&P Global Market Intelligence.

The diamond jewelry retailer's stock plunged 18% on Dec. 6 alone after the results from its fiscal third-quarter 2019 hit the wires. Shares  continued to drift lower in the subsequent days along with the broader market. 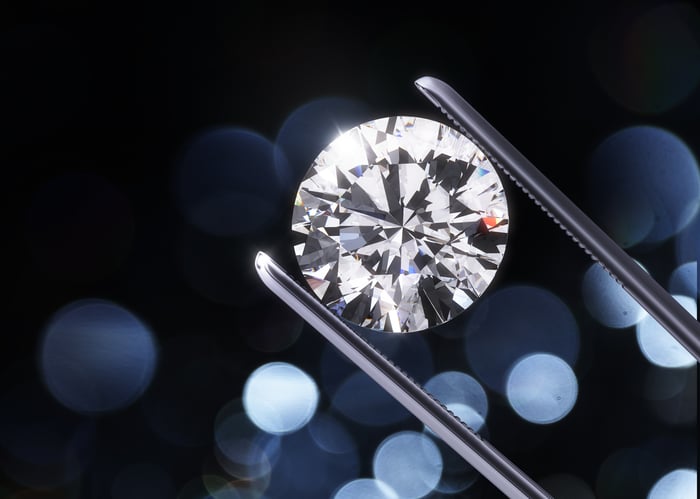 To be clear, Signet's headline numbers looked encouraging relative to expectations. Quarterly revenue climbed 3% year over year to $1.192 billion, with a 1.6% increase in same-store sales. And while that translated to an adjusted (non-GAAP) net loss of $1.06 per share, most analysts were modeling an even-wider loss of $1.08 per share.

But there were imperfections in Signet's report. For one, international same-store sales declined 3.1%, due to "unfavorable traffic trends and a difficult consumer environment."

What's more, though sales through James Allen -- an online jewelry seller that Signet acquired in late 2017 -- climbed 13.6%, that marked a steep sequential deceleration from its 25.3% growth in the previous quarter. During the subsequent conference call, Signet management also warned that they expect James Allen's growth  rates to continue to wane in the next few quarters as the company starts collecting sales tax on purchases in additional states.

Finally, management repeatedly stressed the need for incremental promotions in order to bolster sales in an increasingly competitive environment.

For the full fiscal year, Signet narrowed its revenue guidance to be a $6.26 billion to $6.31 billion range, (compared to $6.2 billion to $6.3 billion before), and forecast adjusted earnings per share in the range of  $4.15 to $4.40 (compared to $4.05 to $4.40 previously). The midpoints of those ranges, however, fell slightly below Wall Street's consensus estimates.

When all is said and done, it's tempting to argue that the limited negative facets of Signet's performance didn't justify the steep pullback in its stock price last month. But investors were understandably spooked, in particular, by the prospect of promotional discounting putting pressure on the jeweler's profitability during the holiday shopping season.