2018 was another banner year for e-commerce. Online sales continued to take share from brick-and-mortar channels, and traditional retailers like Walmart and Target embraced the power of e-commerce and the "omnichannel," or the combination of online and in-store sales. According to the Census Bureau, e-commerce sales were on pace for another year of more than 15% growth in 2018, and Mastercard said holiday e-commerce sales were up 19.1%. 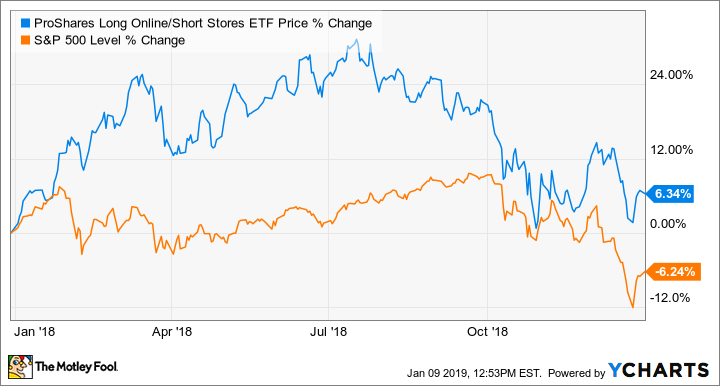 With the consumer economy remaining strong and both technological advances and shopping habits continuing to favor online sales, 2019 is shaping up to be another strong year for e-commerce stocks. Below are three names that could put up impressive growth this year. 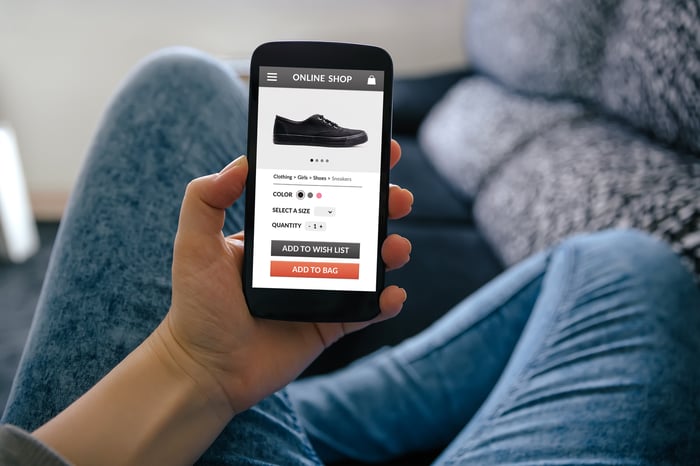 Like many growth stocks in 2018, Grubhub (GRUB) was having a banner year in 2018 until it wasn't. The stock had doubled at one point, but then gave back nearly all of those gains over the last three months of the year due to a weaker-than-expected profit forecast for the fourth quarter. Overall market weakness and volatility also battered growth stocks, especially many that had surged earlier in the year.

However, that recent sell-off presents opportunity for investors. With about 50% market share, Grubhub remains the leader in online restaurant delivery, a fast-growing industry, and has enviable profit margins thanks to its marketplace model as it put up an adjusted profit margin of 19% through the first three quarters of 2018.

Grubhub has also been smart about making acquisitions of smaller food delivery services and payment platforms and has formed partnerships with restaurant chains like Yum! Brands, the parent of KFC, Taco Bell, and Pizza Hut, as well as Jack in the Box. Though the industry is competitive as tech giants like Uber and Amazon also offer restaurant delivery, the market is more regionalized than some might realize, which means Grubhub's share in most of its markets is safer than it may seem. Grubhub, for instance, controls 85% of the market in New York, the country's biggest delivery market, while Uber Eats, the next largest player, is strongest in Texas, where six of its seven biggest markets are located, according to data from Second Measure.

Grubhub's top line continues to surge as revenue jumped 52% in the most recent quarter to $247 million. Although the stock remains pricey at a P/E ratio of 44, the company looks to have a long tail of growth ahead of it, and with its highly profitable model, it's a good bet that the stock will regain some of its recent losses this year.

Another e-commerce stock that's gotten hammered recently is XPO Logistics (XPO 1.76%), a leading provider of last-mile and less-than-truckload delivery for heavy goods like furniture and appliances. You may not have heard of XPO, but it's a popular delivery partner for retailers like IKEA, Home Depot, and Wayfair.

The stock has fallen off a cliff lately as shares are down about half from recent peaks due to a profit growth warning and a short-seller report. Those may seem like warnings for investors, but the risk of their impact already seems priced in as the stock is trading at a P/E of just 21 based on trailing earnings, or less than 15 based on analyst forecasts for this year.

XPO has grown quickly through acquisitions as the company has become a major logistics player, and it's making considerable investments in technology like warehouse automation that should make it an even more valuable partner for its retail customers.

Profits are surging with the help of new technologies and efficiencies realized from recent acquisitions as adjusted earnings per share jumped from $0.59 to $0.89 in its most recent quarter.

Like Grubhub, XPO should have a long tail of growth ahead of it as the company has a unique combination of assets that will become more valuable as e-commerce sales grow, making the stock an appealing buy at today's low price.

Another comeback story to watch in 2019 is JD.com (JD 5.00%), the No. 2 Chinese e-commerce company. 2018 was an awful year for JD as the stock lost 50%, with nearly all those losses coming in the second half of the year. A number of culprits weighed on the stock, including trade tensions between China and the U.S., slowing profit growth, and a surprising arrest of CEO Richard Liu on a rape allegationin Minnesota, which caused the stock to plunge in September.

The good news for investors is that they were relieved of concerns about the CEO's status when law enforcement officials announced in December that they would not prosecute Liu, removing a cloud on the stock as Liu, who also founded the company, has something of an iron grip over JD.

While concerns about the slowing Chinese economy could continue to weigh on the stock, JD's profit growth should rebound as the company was heavily investing in warehouse expansion, adding more than one new warehouse every two days for four consecutive quarters at one point. Those investments should begin to pay off in 2019 through faster delivery, and analysts expect JD's earnings per share to more than double to $0.55.

Even if its growth slows, the Chinese e-commerce market still represents a tremendous long-term growth opportunity as JD saw revenue increase 25% in its most recent quarter, and revenue from its higher-margin services segment was up 49%. JD shares are already up 13% year to date, which would seem to bode well for a strong recovery in 2019.