A big win for lung cancer patients could make Keytruda the world's top-selling cancer drug in a couple of years.

Shares of Merck & Co. (MRK 0.22%), a big pharmaceutical company, climbed 35.8% in 2018, according to data from S&P Global Market Intelligence. Continued success with its lead drug, Keytruda, was the main driver behind this stock's impressive performance last year.

Merck's shares began 2018 from a low point after the company made investors nervous by pulling a European application for its PD-1 checkpoint inhibitor, Keytruda, in late 2017. It turns out there wasn't anything to worry about. By the end of 2018, it was clear that Keytruda's dominance in the lung cancer arena will drive sales into the clouds. 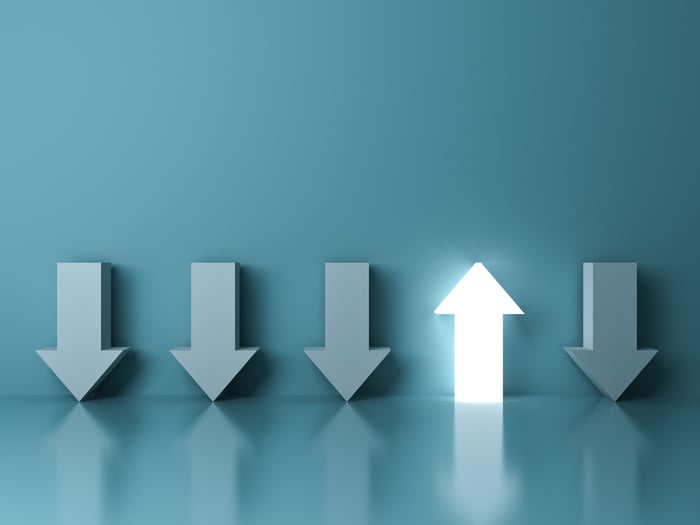 Lung cancer isn't the most common malignancy, but it claims more lives than any other. Around 85% of all lung cancer cases are of the non-small cell lung cancer (NSCLC) variety. Merck outperformed its big pharma peers by a mile last year because nearly all U.S. patients diagnosed with NSCLC will receive Keytruda on its own or in combination with standard chemotherapy going forward.

The FDA has approved just one other PD-1 drug to treat first-line NSCLC, Tecentriq from Roche, and it isn't a threat. Tecentriq is approved in combination with standard chemotherapy plus Avastin for first-line patients with tumors that test negative for EGFR and ALK mutations.

The FDA granted the approval based on results that showed adding Tecentriq to Avastin plus chemo reduced the risk of death by just 22%. Adding Tecentriq to standard chemo without Avastin didn't make a significant difference. During the study that led to Keytruda's approval, adding it to standard chemo increased patients' chance of survival by 51%.

As a standard first treatment for most lung cancer patients, sales of Merck's blockbuster could grow from $5 billion during the first nine months of 2018 to $15 billion annually by 2024.

Keytruda is pulling Merck uphill on its own, but it will get some help from Lynparza, an oral treatment the company markets in partnership with AstraZeneca (AZN 0.19%). In 2018, the FDA approved the easy-to-swallow tablet as a maintenance treatment for patients with breast cancer following chemo, and again for ovarian cancer patients following their initial chemo treatments.

Merck has some stagnating older therapies that will offset contributions from Keytruda and Lynparza, but they won't stop the company from posting impressive total sales growth in the years ahead.