The changing of the calendar year tends to be one of those times when investors take stock of their portfolios and lay out some of the things they want to do in the new year. One thing that tends to make the to-do list is to reassess one's investment thesis on a company and whether it's worth keeping.

In the spirit of this idea, I thought I would share three companies in my own portfolio that I will be watching closely in 2019: solar power component manufacturer SolarEdge Technologies (NASDAQ:SEDG), prospective natural gas exporter Tellurian (NASDAQ:TELL), and homebuilder LGI Homes (NASDAQ:LGIH). Both SolarEdge and LGI Homes have grown at incredible rates over the past five years, and Tellurian is expecting to make a final investment decision this year that could set it on a path to success. Here's why I'm interested in these companies and what I will be watching. 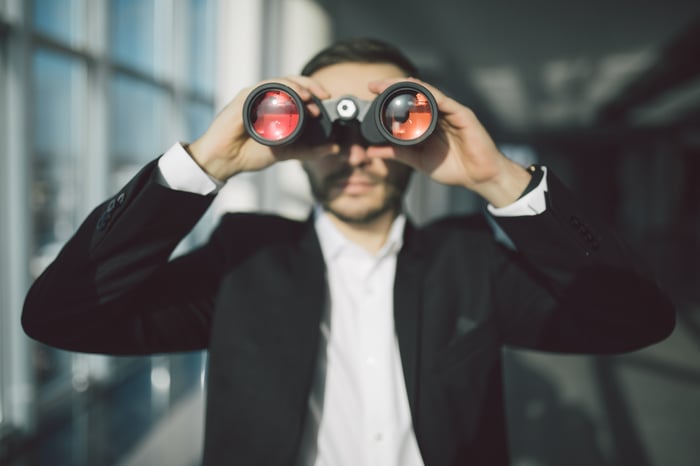 SolarEdge Technologies has carved out a great niche for itself in the solar energy world. The company specializes in power inverter systems that convert the DC power a solar panel produces to the AC power we use in outlets. The company's system optimizes the amount of power each panel can produce and has real-time monitoring of each individual panel to ensure you're getting the most out of your solar system. This is a great option for residential and commercial scale installations where space is constrained.

What's unique about SolarEdge is that it is consistently profitable even though it is still a rather young and fast-growing company. Revenue has grown more than 50% annually over the past five years and it has been both net income- and free cash flow-positive since 2015. Being in the black has allowed the company to build about $450 million in cash and short-term investments on the balance sheet with no debt. That's an enviable position to be in in the solar industry.

The one thing that investors should be acutely watching in 2019 is management's ability to preserve margins and the progress of its recent acquisitions. The solar inverter business is attracting a lot of competition from industrial giants like ABB, Schneider Electric, and Huawei, which could put pressure on margins. SolarEdge has already reported that its gross margin has slipped from 35.4% in 2017 to 33% in the most recent quarter and is guiding for 30%-33% in the coming quarters.

The other thing that SolarEdge investors should keep an eye on is SolarEdge's recent ventures into energy storage by acquiring an uninterrupted power source (UPS) manufacturer and a lithium battery supplier. The intent here is to build a residential or commercial energy package including an inverter system, energy storage, smart outlets, and a remote monitoring platform. While the idea sounds promising on paper, execution will be key here in showing that it can generate better value from selling these complete packages instead of focusing on its inverter systems.

Waiting for the light to turn green

Tellurian is a company looking to build a liquefied natural gas (LNG) export facility on the Gulf Coast. The reason you've never heard of it is that the company was founded last year and has no other revenue-generating assets at this time. A company that has nothing to its name but a business plan in the energy or materials business is typically where investor dreams go to die. That could be the case here because its future still hinges on regulatory approval and signing up customers as equity partners.

The one thing that is encouraging over most prospective energy or materials companies is that this is a management team that has done it once before. The roster of executives and board members is comprised of a murderer's row of people from Cheniere Energy that were largely responsible for bringing that company's business plan of developing an LNG export facility to life. With Cheniere founder Charif Souki in the executive chairman role and former Cheniere CFO and EVP of marketing Meg Gentile in the CEO seat, there is a lot of experience behind this particular start-up. What's more, there is a lot at stake for management as its executives and management own about 43% of shares outstanding. 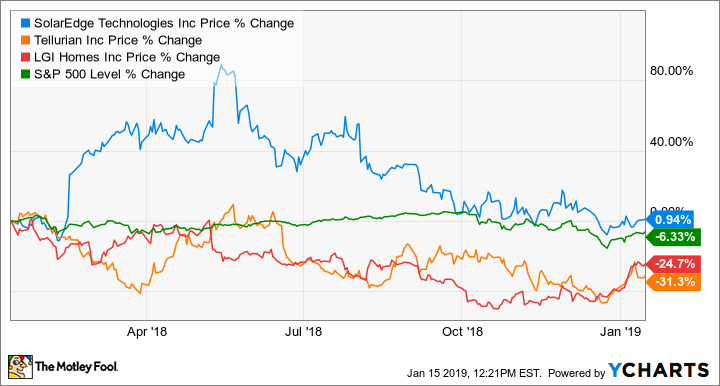 One thing of concern here is that it was supposed to announce customers in the second half of 2018, and the original plan called for enough money from partners to avoid taking on debt. Since then, the plan has been revised and the timetable for customer buy-in keeps getting delayed. Hopefully, this will get resolved soon, but each passing day without announcements of customers raises the chances that it has to revise its business plan again.

Over the past five years, LGI Homes has grown at an astronomical rate by any industry standard. For the homebuilder business, though, its growth rates compared to its peers seem to defy the industry. 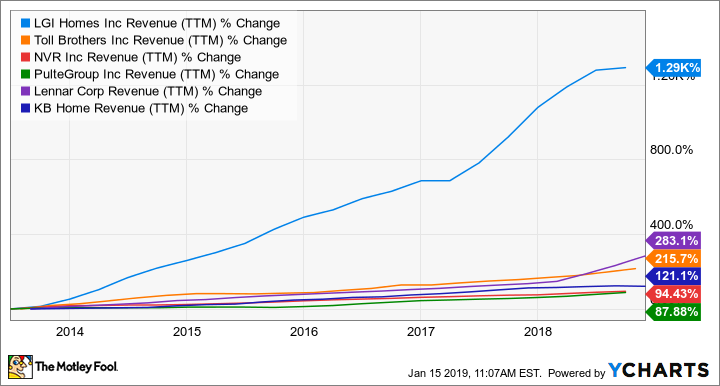 Granted, LGI Homes went public in 2013 and started out much smaller than its larger homebuilding brethren. What LGI Homes has done that's so unique, though, is that its entire business is focused on getting the first-time buyer into a home.

LGI's strategy is to turn renters into homeowners with price points that make mortgages comparable to rental rates in a selected region. To make its price point so low, it eschews many homebuilder practices like offering high levels of customization for homes and trying to buy large tracts of land in popular regions. By keeping its costs down, it is able to produce homes with an average selling price around $100,000 less than its peers while still maintaining gross margins above 22%, which is a great result for this industry.

The greatest concern for the housing market today is affordability. As home prices and interest rates rise, many potential buyers are facing some serious sticker shock. In theory, LGI shouldn't be as affected by affordability as its peers. While some potential customers will drop out because of price, it should attract customers that were previously looking at higher-priced options from its peers. Management noted recently that it just had its best December and fourth-quarter sales results ever when some of its peers have reported noticeable declines in new orders.

2019 is expected to be a weaker housing market than the past few years as housing prices adjust to rising interest rates. What investors should be watching is whether LGI can capitalize on its lower-price strategy to drive sales when others struggle.