From loan growth to efficiency, everything is going in the right direction.

Bank of America (BAC -0.23%) reported earnings, and Wall Street smiled, sending shares up more than 8% on the day.

Investors have a lot to like in Bank of America's earnings report, but there were five things that have Wall Street's full attention.

Bank of America is massive, so large that it controls a low-double-digit share of the nation's deposits. Being big has its advantages, namely in helping the bank spread out its costs, but size has some disadvantages, too -- it's hard to grow a multitrillion-dollar asset base.

This quarter, Bank of America surprised the market by delivering a 1.9% increase in net loans quarter over quarter, which annualizes out to about 7.8%. That's a marked reversal from the first nine months of 2018, over which net loans decreased by about 0.6%. 2. Deposit costs are increasing, but slowly

Bank stocks plunged in the latter part of 2018 as long-term interest rates fell and short-term interest rates increased. For most banks, that's a problem because it forces them to pay more for deposits even as what they earn on their loan portfolios decreases, cutting into their margins. But Bank of America customers aren't particularly rate sensitive; otherwise they would have moved their accounts years ago.

That's helping Bank of America hold down its deposit costs even as rates on the short end of the yield curve are increasing. This quarter, Bank of America's interest-bearing deposits carried an average cost of 0.67% annually, up slightly from 0.55% in the third quarter and 0.32% a year ago. Approximately 31% of its deposits are non-interest bearing, meaning it doesn't pay so much as a dime in interest to those accounts.

The big banks may get a lot of hate, but the reality is that they haul in an outsize share of new accounts. According to a Wall Street Journal story (subscription required), about 45% of new checking accounts opened in 2017 were opened at one of the biggest three U.S. national banks.

3. It has adequate reserves against loan losses

Cynical investors are quick to point out that a bank's earnings are, in any given quarter, nothing more than an estimate. And it's true -- a bank's earnings can be impacted in a meaningful way by a bank's best guess of how much money it will lose to loan losses. Setting aside too little for bad loans will result in a bigger profit today at the cost of smaller profits, or even losses, in the future.

Bank of America's fourth-quarter earnings beat wasn't accomplished with provision gamesmanship, though. The bank's allowance for loan and lease losses as a percentage of total loans decreased only slightly, falling to 1.02% of outstanding loans, down from 1.05% of outstanding loans last quarter.

In other words, for every $100 of loans on its balance sheet, Bank of America has already "earmarked" $1.02 to cover bad loans, down just slightly from $1.05 last quarter. Loan losses remain low, as net charge-offs stood at 0.39% of loans on an annualized basis this quarter.

4. Expenses are eating up a smaller share of revenue

Bank of America has spent the better part of the past decade making itself leaner and more efficient, shuttering unprofitable branches and investing in mobile banking features to service its customers less expensively. Finally, that work is starting to pay dividends.

The efficiency ratio, which divides what a bank spends on noninterest expenses (branches, personnel, phone bills, you name it) by its net revenue, fell below 60% for the full year. Part of this was easy to accomplish -- rising rates increase revenue with few incremental costs -- but the simple fact of the matter is that a larger portion of net revenue is making its way to the pre-tax profit line. 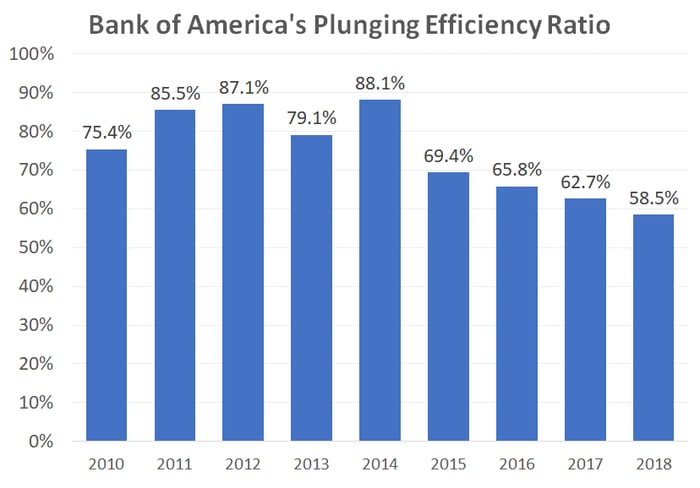 With countless regulatory fines, branch bloat, and zero-interest-rate policy in the rearview mirror, Bank of America's earnings power is finally starting to show.

The big banks are paying out nearly all, and sometimes more, of their net income to shareholders by paying dividends and buying back stock. Share repurchases are a big part of the earnings growth we've seen on a per-share basis.

In the past year, for example, Bank of America's average diluted common shares outstanding (the denominator in its diluted EPS calculation for the full year) decreased by about 5%. Splitting the bank's earnings power across a smaller number of shares results in a larger amount of earnings on a per-share basis.

Bank of America returned roughly $25.5 billion to shareholders by buying back stock ($20.1 billion) and by paying dividends ($5.4 billion) in 2018, equating to nearly more than 95% of its net income to common shareholders over the year.

That may not be sustainable -- bank earnings are highly cyclical, and they must retain earnings to grow -- but for now, buybacks have provided an important lever in driving earnings, which will become more apparent next year, when year-over-year comparisons no longer include the free and easy benefit of a sharp drop in corporate tax rates.