While it hasn't been immune to the auto industry's volatility, General Motors (NYSE:GM) has posted consistently strong results over the past few years. However, investors have never given the company much credit for its performance. GM stock seems to trade permanently at a rock-bottom valuation, indicating that investors always believe there is some disaster looming.

At an investor-day event last week, General Motors again refuted bears' concerns. Not only did the auto giant increase its 2018 earnings forecast, but it also projected that earnings and cash flow will be much stronger over the next two years than analysts had been expecting.

Back in late October, GM's management stated that full-year adjusted earnings per share would probably come in at the high end of the company's guidance range of $5.80 to $6.20. It also said there was potential upside beyond $6.20.

In its investor update on Friday, the General confirmed that EPS surpassed $6.20 on a full-year basis. Automotive free cash flow also came in ahead of the company's most recent guidance. 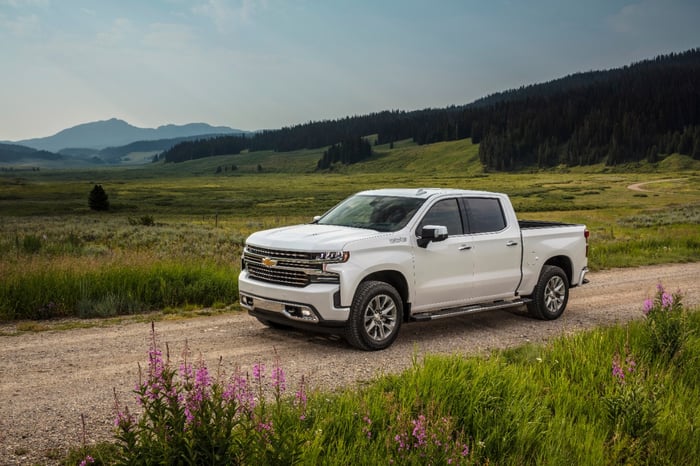 While U.S. auto sales increased slightly in 2018, auto market analysts generally agree that the market has peaked. Slower economic growth, rising new vehicle prices, and higher interest rates are all important risk factors that could cause auto sales to recede in 2019 and beyond. That's a big reason investors have been skeptical of General Motors recently, because the automaker generates the vast majority of its profit in the domestic market.

However, GM expects only a modest decline in industry sales this year. Moreover, it will benefit from having new products in key market segments.

Most notably, all-new versions of the Chevy Silverado and GMC Sierra light-duty pickups should boost sales and profit from the company's most important product line. GM also recently began selling two brand-new crossover models -- the Chevy Blazer and the Cadillac XT4 -- with a third on the way this year, the Cadillac XT6.

Meanwhile, the company is implementing aggressive cost-reduction actions with the goal of saving $4.5 billion annually. That would come on top of the benefit from restructuring in its South Korean subsidiary last year. The net result is that GM expects to return to earnings growth this year, with adjusted EPS coming in between $6.50 and $7.00.

GM's 2019 EPS guidance implies that its profit could rise to as much as $10 billion this year. However, adjusted automotive free cash flow is likely to be between $4.5 billion and $6 billion -- and between $6 billion and $6.5 billion, excluding the timing of certain cash flows -- up from around $4 billion in 2018.

In the long run, GM wants to close the gap between adjusted earnings and free cash flow. It should be able to make substantial progress in 2020, when capex is expected to decline from the recent pace of about $8.5 billion annually to a sustainable rate of $7 billion a year.

Looking further out, General Motors' GM Financial subsidiary will be able to distribute a rising proportion of its earnings to the parent company as its growth rate slows. Until 2018, all of its profits were reinvested to support the growth of its balance sheet. But within a few years, GM Financial should be able to return virtually all of its projected $2 billion in annual earnings to GM through dividends.

Depending on the health of the global economy, GM's adjusted EPS could also grow further in 2020, driven by all-new versions of its heavy-duty trucks and full-size SUVs, two of its most lucrative franchises. Rising earnings and soaring free cash flow will enable GM to continue paying its hefty $0.38 per share quarterly dividend while also buying back lots of stock.