The market is missing the long-term value of this top entertainment brand.

I considered several options as my top stock to buy this month, but I believe Walt Disney (DIS 0.43%) is one of the most attractive large companies to invest in right now. The shares are trading at a modest valuation, and 2019 marks one of the most important, transformative years in Disney's history.

The one initiative that analysts are most focused on is the upcoming launch of Disney+ and how many subscribers the Disney-branded streaming service will attract. However, Disney+ and the recent acquisition of Twenty-First Century Fox's entertainment properties is just one piece of a broader strategy to lay the foundation for growth. 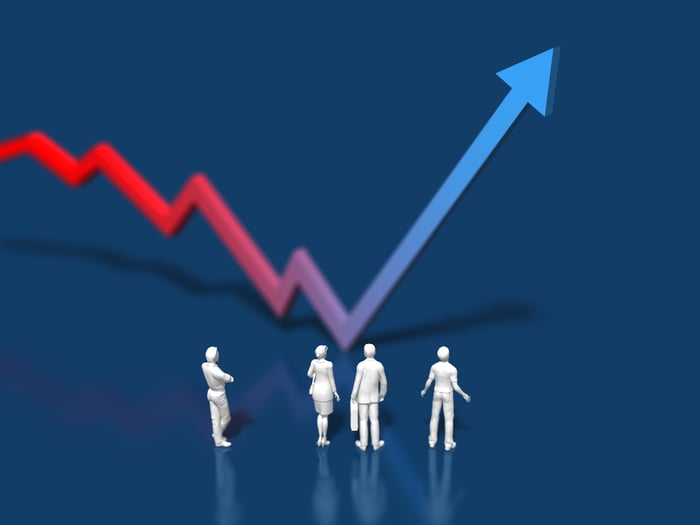 One of the top priorities for Disney this year is launching Disney+ and filling it with appealing content to attract subscribers. Disney could probably draw tens of millions of subscribers right off the bat by merely steering big-budget movies directly to Disney+ and skipping the movie theater altogether. That strategy would be consistent with Netflix and other streaming providers, and given how popular Marvel, Star Wars, and Pixar movies have been in recent years, it would be an easy path to growth for Disney's streaming service.

But Disney CEO Bob Iger is not interested in that approach, and it's because of the lucrative chain of monetization and brand-building Disney gets from huge theatrical releases.

Going forward, Disney is committed to releasing eight to 10 theatrical releases each year, in addition to creating lower-budget exclusives that will go straight to Disney+. The studios segment is just too profitable not to keep the current strategy in place. Last year, the studios segment generated nearly $10 billion in revenue and $2.98 billion in operating profit. Disney's return on invested capital is over 30% for the money it spends to produce movies, which is well above the industry average of less than 10%.

One reason for Disney's box office success is that its movies get a lot of repeat viewers, and as Iger told Barron's (subscription required) in a recent interview, "There's a buzz ... that enhances value." The buzz doesn't stop at the movie theater but goes on to grow traffic at Disney's theme parks around the world. For example, Disney might earn a 30% return on investment for a Star Wars movie that costs $250 million to make, but then there's a long train of profits that comes from selling tickets to Disney World, hotel rooms, merchandise, food, and other products that contributes to the $20 billion Disney makes from its parks and resorts segment every year.

Build it and Star Wars fans will come

Over the last six years, as Disney integrated its acquisitions of Marvel Entertainment (2010) and Lucasfilm (2012) and began one of its best runs ever at the box office, revenue from theme parks and resorts surged 57%, or more than $7 billion over what it made in fiscal 2012. Traffic and guest spending at Disney's theme parks has grown considerably, and while classic franchises like Mickey Mouse are still popular attractions for children, it's the strong pull of Star Wars, Marvel, and Pixar properties (Toy Story) that is fueling growth in Disney's parks and resorts segment right now.

In recent years, the company has rolled out new experiences at its parks to capitalize on the Star Wars content, as well as added new park expansions, such as Toy Story Land. But there's more coming because the more Disney spends on its parks, the more it gets back in guest spending.

The company is currently on track to invest billions in its theme parks within the next five years. That money is going toward expansions at its Tokyo Disney Resort, as well as significant expansions to Hong Kong Disneyland, with two new themed areas and a makeover of Sleeping Beauty Castle. Additionally, Disney is adding three new themed areas to Disneyland Paris, including Marvel, Frozen, and Star Wars. The company is also expanding its Disney Cruise Line fleet.

The top attraction scheduled to open at Disney's Hollywood Studios and Disneyland this year is the new Star Wars: Galaxy's Edge, which will make visitors feel like they are in a Star Wars movie. There will be a life-size model of the Millennium Falcon that visitors can board and tour, a Millennium Falcon flight simulator, and a large area made to resemble the look and atmosphere of a faraway outpost on planet Batuu in the Star Wars universe. Plus, beyond 2019, there is a new Star Wars-themed hotel that will be seamlessly connected to Star Wars: Galaxy's Edge at Disney's Hollywood Studios. 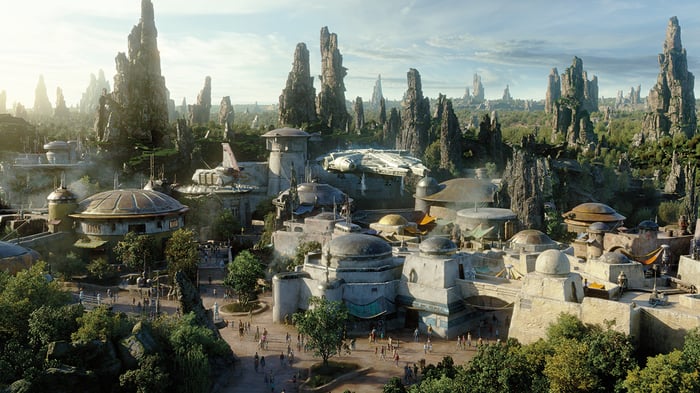 One analyst estimated that Disney is on track to spend $24 billion on its parks and resorts over the next several years. Last year, the parks and resorts grew revenue 10% year over year, and operating profit climbed 18% to $4.5 billion. The new attractions mentioned above should keep that growth going, which means it shouldn't take long for Disney to recover the cost of that investment.

It's clear management senses a significant long-term opportunity to double down on the heart and soul of Disney, which is its entertainment properties. The studios segment is set to have another big year in 2019 as it reboots its classic franchises with live-action versions of Dumbo, Aladdin, and The Lion King, as well as the highly anticipated release of Star Wars: Episode IX. Of course, all of this wouldn't sound as sweet if the stock's valuation weren't currently as low as it is, trading at a modest forward P/E of 15 times next year's earnings estimates. It's for all these reasons that Disney is my top stock to buy this month.