The company reported results for an important phase 2 trial.

Shares of Aptinyx (APTX -0.48%) fell over 71% today after the company reported phase 2 trial results that missed the mark. Its lead drug candidate, NYX-2925, did not meet the primary endpoint in a study evaluating it as potential treatment for painful diabetic peripheral neuropathy.

Analysts were watching the mid-stage asset's development because it had the potential to become an abuse-tolerant treatment option for painful diabetic peripheral neuropathy. It's also being evaluated in a phase 2 trial for fibromyalgia. The clinical failure reset the company's market cap from nearly $600 million to around $175 million in just one day. 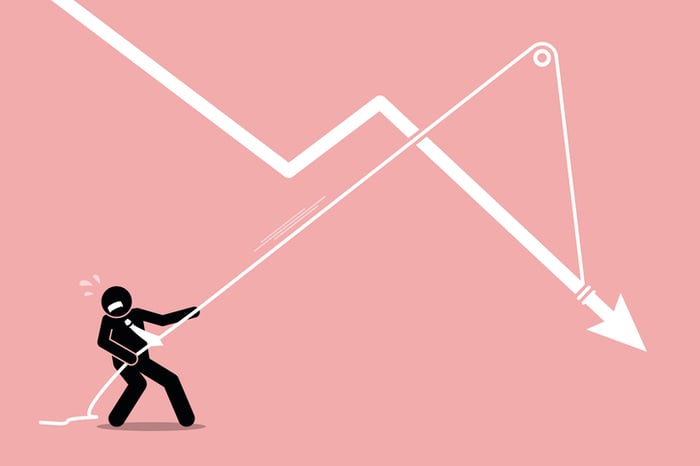 Aptinyx has focused its drug development efforts on diseases of the central nervous system. To that end, while NYX-2925 was the most advanced drug candidate in the pipeline, there are two others in development. NYX-783 is ready to begin a phase 2 trial evaluating its potential to treat post-traumatic stress disorder, and NYX-458 is currently being evaluated in a phase 1 trial as a potential treatment for Parkinson's disease.

All three drug candidates target NMDA receptors found in nerve cells, which help to regulate cognitive function and other biological processes. NMDA receptors have become important targets, along with GABA receptors, among next-generation treatments of central nervous diseases including depression. That could give investors a little optimism that Aptinyx may be on the right track, although it'll be difficult to get too excited without a phase 2 trial success (when the effectiveness of a drug is evaluated).

If there's any silver lining for investors, it's the fact that Aptinyx reported $165 million in cash and cash equivalents at the end of September 2018. That's a nice chunk of change for a company with relatively light capital requirements (the business reported an operating loss of $40 million in the first nine months of 2018), which provides some flexibility on how to proceed. But whether the company goes all-in on its remaining clinical programs, acquires additional assets, or plucks a promising compound from preclinical studies; investors simply don't have much reason to be invested in the business at this time.

Why Aptinyx Stock Is Soaring Today