At the start of the year, Gilead Sciences (NASDAQ:GILD) and Celgene (NASDAQ:CELG) were arguably the biggest value plays in the biotech industry. Gilead was off 48% from its all-time high in July 2015, while Celgene was down 56% from its high-water mark set in September 2017.

Celgene found a suitor in Bristol-Myers Squibb (NYSE:BMY) willing to pay a 54% premium.

The reasons for their declines, and therefore their attractiveness as potential takeout targets, couldn't be different. This chart pretty much sums it up. 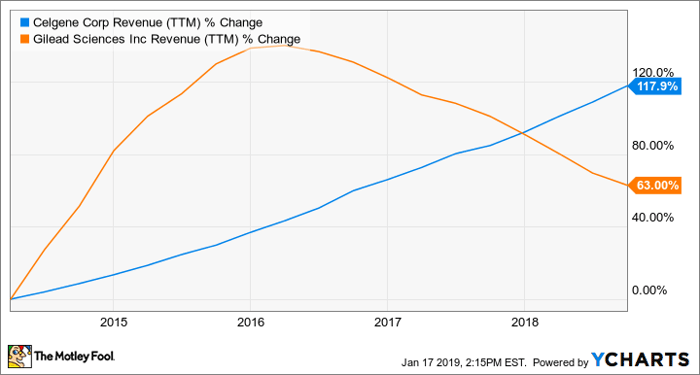 For the last five years, Celgene's revenue has been steadily marching higher. Gilead, on the other hand, peaked a few years ago as competition from AbbVie (NYSE:ABBV) ate into its hepatitis C franchise. Through the first three quarters of 2018, Gilead's sales are down 19% year over year; Celgene's are up 18% over the same time period.

While past growth looks great, the decline of Celgene's stock price was predicated on future expectations. Investors were worried that the company wasn't going to be able to make up for the loss of sales from top-selling Revlimid, which will start seeing limited generic competition in 2022, escalating until full competition starts in early 2026.

Some of the worry is certainly warranted; the launch trajectory of anti-inflammatory Otezla has been lumpy, and there was a delay with the filing for approval of multiple sclerosis drug ozanimod. But management insists that five pipeline drugs, including ozanimod, will be able to make up for all of the lost Revlimid sales.

Bristol-Myers Squibb appears to have agreed -- with the caveat that $9 per share of the potential payout would be tied to a contingent value right that only gets paid upon the approval of three of those drugs (ozanimod, liso-cel, and bb2121) by certain prearranged dates.

What it would take for Gilead to follow suit

First and foremost, Gilead needs to stabilize its revenue and get back to growing. It's really hard for potential acquirers to value declining assets when a competitor exists that could result in a pricing war, so any suitor is likely to factor in a large margin of safety that would result in a minuscule premium. Management has said that 2019 will be a return to growth with less volatility in the hepatitis C market, so perhaps this year will mark the turnaround.

Just as importantly, a potential suitor would need to see impending growth from Gilead's pipeline. The 2017 acquisition of Kite Pharma added a pipeline of CAR-T therapies, but the most important near-term pipeline news will come from results of two late-stage trials testing selonsertib for nonalcoholic steatohepatitis (NASH) that are due out in the first half of this year. There's also a late-stage study of filgotinib for rheumatoid arthritis, which is expected to read out this quarter, but rheumatoid arthritis is a competitive market, so the data will have to be outstanding to unseat the entrenched competitors.

NASH, on the other hand, is wide open. Based on the number of patients, it's easy to see Gilead making a few billion selling NASH drugs, especially if it's able to find a cocktail of drugs that work together like it has for HIV and hepatitis C.

Finally, to make itself more valuable -- whether that results in an acquisition or just an increase in investor-assigned valuation -- Gilead will have to make smart use of its cash. For all the problems the biotech has had keeping its revenue high, Gilead still throws off a lot of free cash flow, which new CEO Daniel O'Day will have to put to work wisely, balancing share repurchases with acquisitions of its own to boost its pipeline and future revenue.