At long last, Tencent Music (TME 3.55%), the Tencent subsidiary and biggest music-streaming provider in the world, went public last year. Debuting at $13 a share, and closing its first day of trading at $14, Tencent Music was one of the biggest IPOs of 2018.

It hasn't gotten any bigger since. In fact, with a share price now slightly below $13, Tencent appears to have lost money for many of the investors who bought into it early.

"Thanks" for this are probably due to the lukewarm endorsements Tencent Music got from several of the investment bankers who backed its IPO. After the quiet period surrounding the IPO ended earlier this month, underwriters Goldman Sachs and KeyBanc awarded Tencent Music buy ratings. Stifel, Morgan Stanley, and Deutsche Bank, however -- which also helped to underwrite the IPO -- did not, giving their new offering only hold ratings.

And CICC, HSBC, BOCI, Allen & Company, China Renaissance, Merrill Lynch, Credit Suisse, and JPMorgan -- the rest of the team who underwrote the Tencent Music IPO? They gave no ratings at all! Completely mute on an offering they had helped sell to the investing public.

One of these mutes, however, just found its voice -- and it's a full-throated yell endorsing Tencent Music. 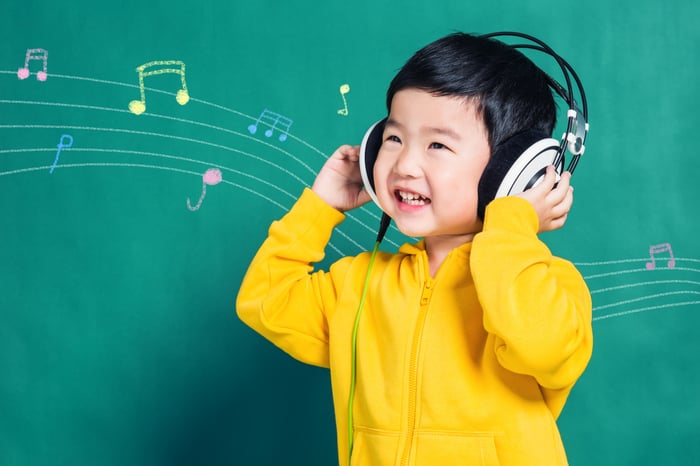 JPMorgan speaks (but should you listen?)

More than a month after the Tencent Music IPO, last night, analysts at JPMorgan finally pronounced their opinion on the stock they helped to sell to investors last month -- and so now we know: They like it.

Tencent Music has a "China-unique revenue model" which will help it to grow in the world's most populous country, argues JPMorgan in a note covered today on TheFly.com. It's also "the largest online music streaming operator globally."

Currently, Tencent Music is generating only about $2.5 billion in annual sales, according to data from S&P Global Market Intelligence. That's more than Pandora takes in, but less than either Spotify or Sirius XM. With $480 million in trailing profits, however, Tencent Music boats an 18.9% net profit margin that's better than the 15.6% net profit margin at Sirius -- and much better than the profitability of either Spotify or Pandora, both of which are currently losing money.

Even better than just how Tencent Music is doing today, however, JPMorgan is impressed with what it sees as Tencent Music's "sizable" potential to grow sales and profits in the future. So how big is that potential?

According to the consensus of analysts now following the stock, Tencent Music is likely to grow earnings at an impressive 42% compound annual rate over the next five years. Analysts see Tencent Music more than doubling 2017's $0.07 per share in profits to $0.18 when fiscal 2018 earnings come out, then growing another 50% (to $0.27) in 2019, and more than doubling that amount by 2022, when the company could be earning $0.59 per share.

So granted, valued on trailing earnings, Tencent Music sells for a rather pricey 44 times earnings. But if the company grows as expected, that could be a fair price to pay -- or even a cheap price. (JPMorgan pegs Tencent Music's worth at $16 a share. Earlier this month, other analysts went as high as $19 in their price targets.)

Adding to the stock's attractiveness, free cash flow is strong. (Cash profits for the past 12 months reached $485 million, actually exceeding reported net income.) And as for debt -- well, Tencent Music has none. Flush with the proceeds of its IPO, the company boasts a balance sheet brimming with $1.7 billion cash, and not a lick of debt. Arguably, these facts make Tencent Music shares even cheaper than they appear when valued purely on GAAP earnings.

Now, is China's economic slowdown a concern? Could Chinese consumers, hurt by slowing job growth and a decelerating GDP, decide to cut back on their spending on streaming music?

Absolutely -- that's a concern that potential investors in Tencent Music have to be aware of. On the other hand, though, you have to figure that the analysts following Tencent Music are also aware of this risk, and have factored it into their growth estimates for the stock. Assuming that's the case, and assuming, too, that the company can grow at the 40%-plus annual rates Wall Street is projecting, I have to say that Tencent Music stock selling for a below-IPO price looks pretty attractive.