"A great friend, an honest person, a remarkable human being."

If there is ever an official investor hall of fame, Jack Bogle would be a lock as a unanimous first-team ballot winner in the inaugural class. The founder of Vanguard, who died yesterday at the age of 89, has done as much as anyone over the last 50 years to help individual investors invest better.

A man after our own Foolish hearts, Mr. Bogle was long a champion of long-term, low-turnover, low-cost investing.

He was an investing pioneer who created the first index-based mutual fund in 1976 based on a simple premise -- low cost, market-matching investing is far better than most expensive actively managed funds. Cynics on Wall Street laughed at him. Critics doubted him. Some called his experiment "Bogle's Folly." Undeterred, Mr. Bogle launched his index innovation with a mere $11.3 million in assets.

The Vanguard 500 Index Fund now carries more than $400 billion under management and is the anchor of the massive Vanguard fund fleet. 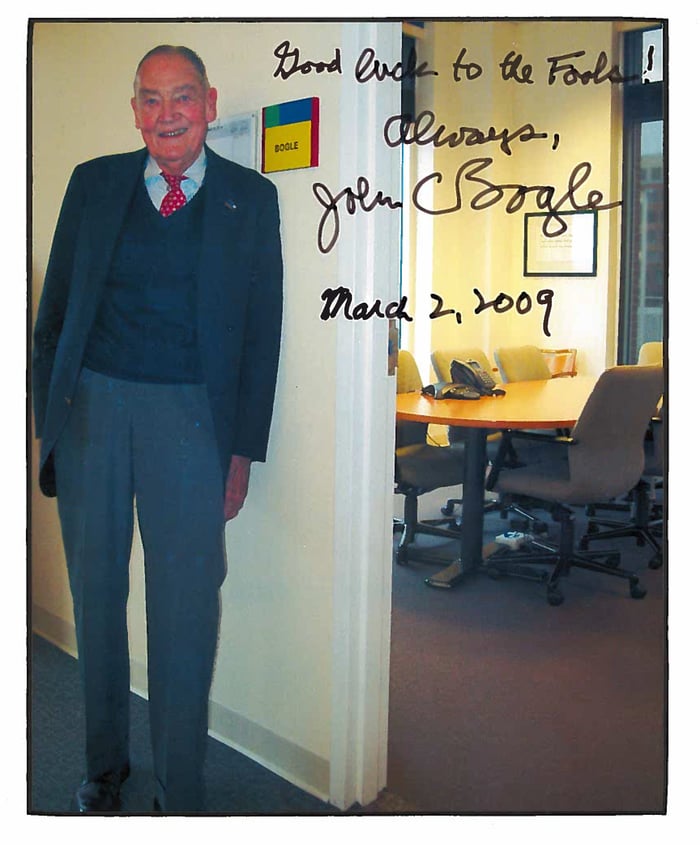 His passion to serve the investor first and foremost led him to create Vanguard as a mutual company owned by fund holders, not stockholders. Today it is one of the largest money management firms in the world, managing more than $5 trillion, most of which is invested in low-cost index funds.

Fool CEO and co-founder Tom Gardner has called Jack "one of our heroes at The Motley Fool." We even have a conference room named after Bogle in our Alexandria, Va., headquarters. Tom shares his thoughts on Jack below.

While we differed with the Father of Indexing about the power of investing in individual US equities over the long-term, we aligned with his vision of a better, more transparent, more honest investing world for everyone.

As William Shakespeare writes in Twelfth Night, "Foolery, sir, does walk about the orb like the sun; it shines everywhere." Jack Bogle's vision, determination, and legacy burn brightly for investors around the globe.

We praise him. We salute him. And we thank him.

Jack Bogle, perhaps more than any individual in human history, has helped the finances of individuals around the world. He delivered index investing into a financial world sorely in need of transparency and fairness. He fought to protect investors everywhere. Jack was a philosopher and a dreamer and a true iconoclast. He had a lover's quarrel with the world, even with his own organization at times. He loved Vanguard and forever wanted it to improve. Jack had an active mind. His wit was sharp. He wrote and gave speeches perpetually. He was a man of the people. He was one of us. A great friend, an honest person, a remarkable human being.

Over the years The Motley Fool has had the privilege to meet and talk with Jack Bogle many times. Below is one of those conversations as well as a love letter. We hope you enjoy them.