Persistent pressure from oil prices poses a long-term threat to the energy giant.

ExxonMobil (XOM 0.49%) has been an energy leader for decades, and it's been generous in the way that it's shared its profits with shareholders in the form of dividends. As a Dividend Aristocrat, ExxonMobil has delivered well over a quarter-century of annual dividend increases to its investors, demonstrating its ability to do so despite huge volatility in the prices of crude oil and other energy products on which the giant relies for its profitability.

Lately, oil prices have performed poorly, and that's been a cause of concern among many dividend investors. ExxonMobil hasn't let falling crude get in the way of its dividend growth thus far, but there's always the chance that persistently bad conditions could require a change in the company's philosophy. Below, we'll look more closely to see whether ExxonMobil is likely to reward dividend investors in 2019.

Over time, ExxonMobil has been consistent in how it's treated its shareholders. Dividend increases have come at regular intervals, most often during the second quarter of each year. That's made it fairly easy to predict when the oil giant would make its move to extend its long streak of rising payouts.

However, ExxonMobil hasn't always made increases of the same magnitude. During periods of favorable conditions in the energy industry, Exxon's been more generous. For instance, in 2012, it delivered a huge 21% boost to its dividend, and increases of about 10% per year followed in 2013 and 2014. During tougher times, it has often limited its increase to just $0.02 per share, which worked out to less than a 3% rise in 2017. 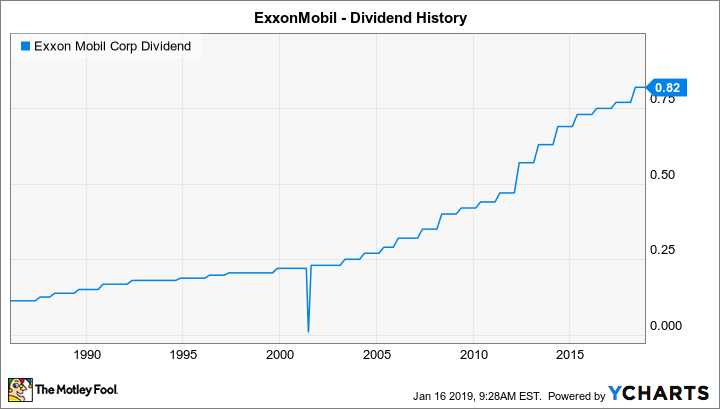 XOM Dividend data by YCharts. Note: Downward spike in early 2000s is misleading, as it reflects a supplemental dividend payment in addition to regular quarterly payments.

Most recently, ExxonMobil has split the difference. In 2018, the company made a $0.05-per-share boost to its payout to $0.82 every quarter. At the time, that reflected some enthusiasm that energy prices looked to be moving higher, helping to restore some of Exxon's lost profit growth.

The danger with ExxonMobil's dividend

From a fundamental perspective, ExxonMobil does have some challenges to overcome. Declining production rates have plagued the energy giant in recent years, indicating that management is having trouble finding the highly lucrative projects that it prefers to emphasize in allocating capital resources. Although Exxon's cost structure is fairly resilient to falling oil prices, it doesn't make the impact on profitability any less severe when crude drops significantly.

Yet Exxon is moving aggressively to address its long-term strategic issues. The company is targeting investments in every area of its business, with an emphasis on upstream capacity to grow its production volume over time. Promising prospects in the Permian Basin and a number of areas across the globe could result in considerable increases in production over the next several years. At the same time, a greater focus on opportunities in its downstream refining and chemicals businesses could give Exxon more exposure to the broader industry, reducing its sensitivity to oil prices. Overall, the company is optimistic that it can boost its growth rate significantly in the years to come.

What to expect from ExxonMobil's dividend in 2019

In the past, when ExxonMobil has needed to commit to large investments in order to stay financially healthy, it's toned down its dividend increases for the year. I think that's likely for 2019, and so I suspect that shareholders will see just a $0.02-per-share boost near midyear to bring the new payout to $0.84 per share. That'll give Exxon plenty of flexibility to keep investing available cash back into its business while still meeting its commitment to shareholders.