This is an unusually difficult time for people to read the tea leaves of the U.S. economy.

On the one hand, large corporations look fairly healthy, and the job market has been strong. On the other, a steep stock market drop, the government shutdown, trade conflicts, and a host of political uncertainties loom large. The good times may at any moment cease to roll.

At the Main Street level, many Americans have been making progress toward their financial goals, but consumer debt -- both short term and long term -- has climbed back to record highs, and a downturn in the economy could quickly downgrade the financial situations of millions of families.

As the investment disclaimers always say, past performance does not guarantee future results. To the degree that the fiscal signs are upbeat, they are also precarious. Yet most Americans have shown what you could call cautious optimism when it comes to their personal financial situations, according to a new survey from Bankrate.com. 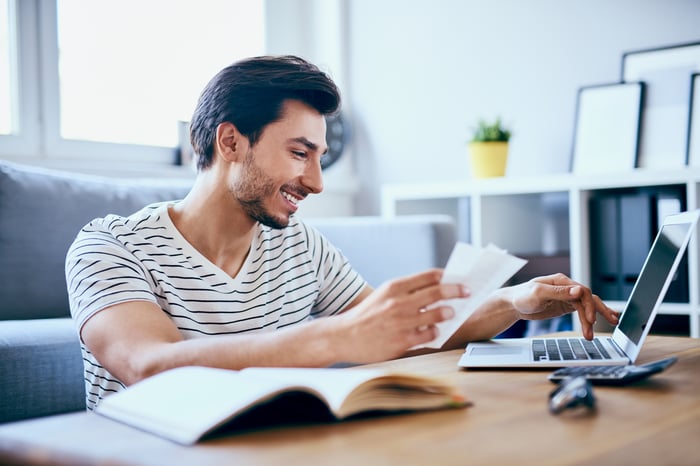 A lack of pessimism is not the same as optimism

Among those who expect their finances to get worse, 49% say it will be political leaders in Washington who are at least partly to blame. Among those who expect things to get better, however, only 10% credited the government as one reason why. Instead, they looked forward to "making more money at work" (52%), "having less debt" (38%) and "making more money from savings and investments" (17%).

Across all of those surveyed, 89% said they have at least one financial goal for this year. About 30% said that paying off debt topped their lists, followed by better budgeting (13%), saving more money for retirement (12%), saving more for emergencies (10%), getting a higher paying job (6%), investing more (5%) and buying a new home (4%).

"Regardless of whether or not one is upbeat on financial prospects for the coming year, the fact is that more Americans need to make savings a priority," said Bankrate.com Senior Economic Analyst Mark Hamrick in a press release. "Too many are living paycheck-to-paycheck, even at a time when the economy has been broadly judged to be doing well."

While the U.S. economy is entirely outside your control, that doesn't mean you're powerless when it comes to influencing your financial health. If you want to be doing better at the end of 2019 than you were at the end of 2018, take steps to make that happen.

That could mean doing as simple as making (and sticking to) a budget, or it could involve something more drastic like cutting expenses by moving somewhere cheaper. It's also possible to improve your financial situation by tackling your debt, seeking a new, better-paying job, or adding to your income via a side hustle.

Healthy or unhealthy, your financial situation isn't something that just happens to you. So don't be an optimist or a pessimist about it -- be an activist, and do what you can do to improve your future.