A lot of the industrial-services company's success will be determined by the market for oil and gas, but this one thing matters immensely.

When General Electric ( GE 3.63% ) made a bold bet to acquire a majority stake in Baker Hughes, a GE Company ( BKR 3.42% ), it thought combining oil equipment and services into a single entity would lead to immense opportunities to cross-sell to customers.

The idea sounds great in theory, but so far the integration process has taken so long that investors have yet to really reap the benefits. Making headway on that integration process is one of a few catalysts that could help Baker Hughes put 2018 behind it. 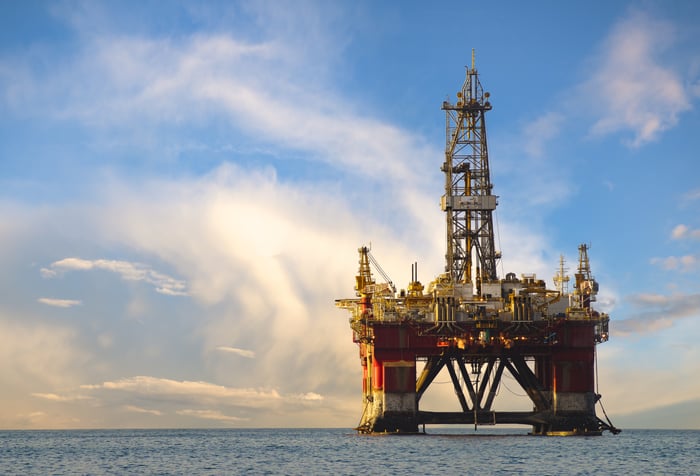 Even before the merger in 2017, Baker Hughes had always been a step behind its peers when it came to operating margins. The difference between its and Schlumberger's and Halliburton's margins became even more pronounced after the merger. General Electric's oil equipment sales and Baker Hughes' oil-field services didn't have that much in common, so bringing them together didn't immediately generate the kind of operational synergies you might expect from an acquisition. 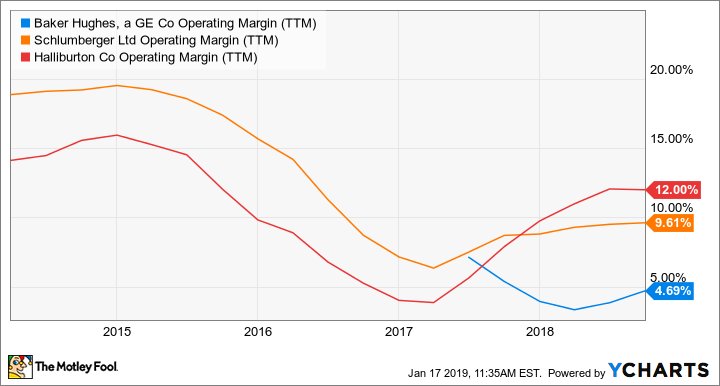 According to CEO Lorenzo Simonelli, the combined entity should be able to carve out about $1.6 billion in synergies by 2020. On top of the more common cost cuts like reducing overhead, management thinks there are immense selling synergies by packaging oil equipment and services.

So far, Baker Hughes says it has achieved about $700 million of its $1.6 billion synergy goal. Being able to speed up this integration process would be immensely helpful in improving margins. More than anything, this should be management's focus in 2019.

One of the unique aspects of Baker Hughes compared with other major oil services firms is that it has a presence in all parts of the oil and gas value chain instead of just the exploration and production segment. While Baker Hughes and the rest of the industry will surely benefit if we see a significant increase in capital spending for production, Baker Hughes is one of the only ones that could benefit from spending for other things like liquefied natural gas (LNG) and petrochemical facilities.

In the U.S. alone, there are five major LNG export facilities expected to receive their final investment decision. There is also a flurry of LNG activity outside the U.S. on the precipice of getting the green light. Back in October, Royal Dutch Shell announced it was going ahead with its LNG Canada project, and ExxonMobil is likely going to start work on a major export terminal in Mozambique.

With some of the world's most advanced turbomachinery to convert natural gas into a liquid state for export, Baker Hughes has a good chance at landing some of that business. If it can, then it will help build the backlog for its turbomachinery and process solutions division, which has been struggling with a dearth of orders lately.

3. Oil prices would help, too

Even though Baker Hughes doesn't have any direct exposure to oil and gas prices, the money its customers have to spend on new projects is wholly dependent on oil prices.

Ever since oil prices started to crash all the way back in 2014, every company tied to upstream oil and gas has tried to lower the price at which it can extract a barrel of oil. Shale drilling has been incredibly successful at this. In some of the best drilling locations of the Permian Basin, the break-even price can be below $40 per barrel.

Baker Hughes has much lower exposure to shale, though. Its wheelhouse is in the offshore market. This has been slower to come down the cost curve, but management thinks some of its offerings can make offshore developments economical below $50 a barrel.

That would be crucial in attracting new business with volatile oil prices. While there is no guarantee that we will continue to see prices above $50 a barrel, the ability to deliver projects at this low price will increase the likelihood that producers will be willing to give the green light for offshore projects. 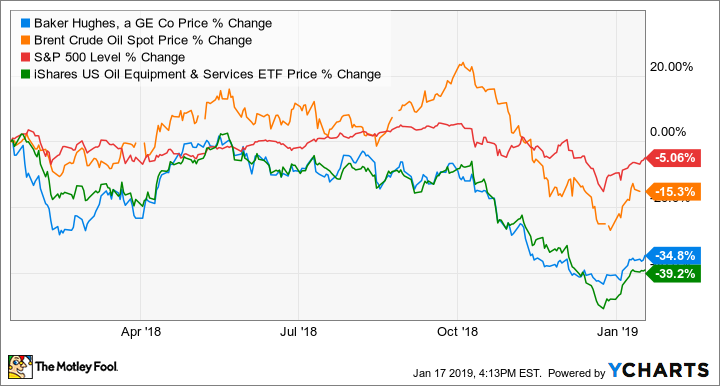 Deliver on what it can control

As much as oil prices and sanctioned LNG projects would help to bolster Baker Hughes' stock price, both of them are largely out of the company's hands. What's more, they are cyclical events that will likely wax and wane over time. So even if they provide a boost in 2019, there's no guarantee that it will last.

What really matters for long-term investors is for management to execute its integration plan and to prove that bringing these two disparate parts of the industry under one roof was a smart move. That process is taking a long time, and its margins are suffering as a result. From an investor's standpoint, it's probably worth waiting to see if management can truly deliver on its integration process and increase margins. Otherwise, it won't matter that much if it gets more business because it won't be able to convert it to bottom-line earnings.