Check out the latest CenturyLink and T-Mobile US earnings call transcripts.

Investors often turn to telecom stocks in order to tap into the income that companies in the industry typically pay shareholders through dividends. Lately, however, the growth in the wireless communications sector has given major players in telecom plenty of opportunities to expand their businesses. Both CenturyLink (LUMN 0.72%) and T-Mobile US (TMUS 1.98%) have sought to take advantage of high demand for access to telecom services, and although they have somewhat different business models, they both strive to serve customers with solutions to their needs.

It's been a difficult environment for the telecom industry recently, with competition becoming fiercer than ever. If you're looking at buying a telecom stock, it's important to understand the risks involved as well as the potential rewards. With that in mind, below we'll take a look at CenturyLink and T-Mobile to see which looks more attractive right now. 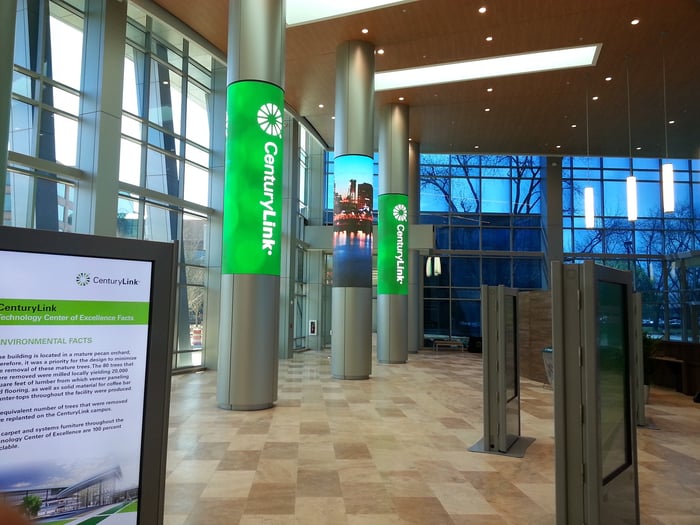 CenturyLink and T-Mobile have seen their stocks move in different directions over the past year. T-Mobile is up 5% since January 2018, but CenturyLink has dropped 11% over the same time frame.

When you look at some simple valuation metrics based on net income, CenturyLink's weaker share-price performance shows up in lower earnings multiples. On a trailing basis, CenturyLink's stock trades at just nine times earnings, compared to between 11 and 12 for T-Mobile. Even if you decide to use forward-looking estimates in order to take out the one-time impacts of tax reform and other extraordinary items, CenturyLink retains an advantage, with a forward multiple of 13 compared to T-Mobile's 16. After its stock drop, CenturyLink looks like the better value right now.

When it comes to dividends, there's no contest between these two stocks. T-Mobile is one of the rare telecom stocks that pays no dividend at all. Meanwhile, CenturyLink has one of the most generous dividends in the market, with a current yield of more than 13%.

Investors have been nervous about CenturyLink's dividend for a long time, because it's been among the top-yielding stocks in the market. That's often a danger sign, and shareholders can remember quite well the 25% dividend cut that CenturyLink made in 2013.

Yet CenturyLink has consistently held the line in continuing to pay its $0.54-per-share quarterly dividend, and the company's made concessions in other areas to help support that payment. Despite weakening revenue and high debt levels, CenturyLink has moved to emphasis its highest-margin business lines, getting rid of distractions that produce less profit than problems. Reduced capital expenditure plans should also help to leave enough cash left over to pay for dividends at their current levels. As a result, for now at least, CenturyLink is the clear winner on the dividend front.

The big question is where CenturyLink and T-Mobile go from here. For CenturyLink, 2018 was a solid year, with the telecom finally finding ways to turn a profit. Now that the company has had time to integrate its combined businesses after its merger with Level 3 Communications, more efficient operational performance has led to lower costs, and that in turn has freed up more cash flow to go toward maintaining debt, paying the dividend, and reinvesting in its business. CenturyLink still faces the formidable challenge of dealing with the transformative shift away from traditional landline and video services toward broadband and streaming, and it hasn't been entirely successful on that note. However, the company has managed to buy itself some time as it works through that challenge more extensively.

Meanwhile, T-Mobile has been a lot more ambitious. The self-styled Un-carrier has seen earnings explode higher, with massive gains in subscriber counts that have increasingly included the highly valued postpaid subscribers that are most profitable for telecom companies. Moreover, the customers that T-Mobile is winning from competitors have tended to stay there, and CEO John Legere has been vocal in his company's efforts to catch the top two giants in the industry. Going forward, much will depend on whether the pending merger with fellow telecom Sprint (S) gets finalized and proceeds well, especially given some of the challenges that Sprint has faced. Nevertheless, T-Mobile is on an upward trajectory, and the promise of 5G technology has customers and investors excited.

Right now, T-Mobile seems to have better prospects for stock investors. Despite the lack of a dividend and a slightly higher valuation, T-Mobile's growth opportunities are much more promising, and the price you pay for that growth is modest. Only if you're reliant on dividend income does CenturyLink warrant a win here, and I think in the long run, T-Mobile stands a better chance of producing supersized gains for shareholders than CenturyLink does.