E-commerce in India is expected to be a $100 billion market opportunity by 2022, which PwC says makes it "arguably the world's most promising internet economy." It is the second-biggest economy in Asia and the world's second-biggest internet market, and it is growing rapidly.

But India's government may have just stepped on the brakes by limiting how much Amazon.com (NASDAQ:AMZN) and Walmart (NYSE:WMT) will be able to control the market. It imposed new rules that take effect Feb. 1 and primarily do three things:

Though the rules apply to everyone, it's clear India is targeting Amazon and Walmart, which have a combined market share in excess of 70%. Both have invested heavily in India -- Amazon has invested some $7 billion, while Walmart paid $16 billion for a majority stake in Flipkart -- and the government's crackdown will limit how they operate.

Worse, it could inhibit the ability of consumers to enjoy the low prices and broad range of products most associate with the two retailers, and may deter other e-commerce companies from making investments in India. 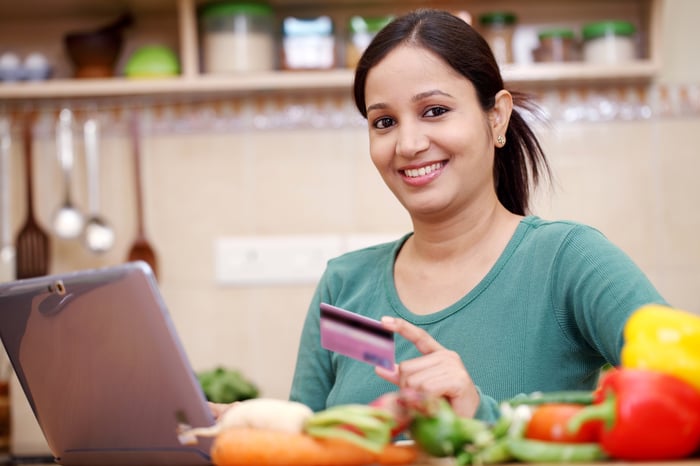 India's foreign direct-investment laws already limited how outside companies could function in the country. For example, Walmart already was prohibited from selling products on Flipkart that were sourced outside of India. The new rules further clarify just what is allowed, and essentially tell the platforms they must act like marketplaces, not retailers.

Businesses that own the inventory being sold on the controlling e-commerce platform will no longer be able to do so if the platform owns 25% or more of those businesses. Flipkart, which is 77% owned by Walmart, used to derive most of its sales from its subsidiary WS Retail. But apparently in anticipation of the new rules, it largely stopped selling its products on the platform.

Amazon, though, derives around 40% of its Amazon India sales from Cloudtail India, its joint deal with Catamaran Ventures. It has another major retailer, Appario Retail, that also exceeds the 25% threshold. Under the new rules, they won't be able to sell on Amazon.

A bland state of sameness?

Brands will also be prohibited from teaming up with platforms to offer exclusive discounts, which may just wreck the smartphone market in India. Both Flipkart and Amazon rely upon exclusive arrangements with smartphone makers during product launches, such as Xiaomi launching new models of its Mi phones on Amazon and rival Chinese smartphone maker Oppo doing so on Flipkart.

There were nearly 70 exclusive smartphone offers on Flipkart in 2018 and almost 50 on Amazon. Smartphones account for half of all e-commerce sales in India, and the ability to launch new products exclusively on one site or the other could impede future sales.

The rest of the online retail market could implode from the rule prohibiting deep discounting. Amazon and Flipkart can no longer influence, either directly or indirectly, the offer of discounts on products and, the government says, "shall maintain a level playing field." With little ability to differentiate themselves, online retailers could find their sales stagnating.

The new rules were ostensibly implemented to help small retailers remain competitive against the industry giants and their alleged "predatory" pricing policies. But giving consumers the absolute lowest prices and widest selection of goods was what helped elevate India's e-commerce market to the pinnacle at which it sits.

In light of these new regulations, those grandiose estimates of market growth may have to be scaled back, and those multibillion-dollar investments Amazon and Walmart made in India may end up being written down some as the full impact plays out and both retailers adjust to the new rules of the game.