Content isn't the only thing eating up the video streamer's cash.

Video streamer Netflix (NFLX 2.90%) saw its profits plunge in the fourth quarter. Net income was just $134 million, down 67% from the third quarter and 28% year over year. The company blamed the timing of new shows. Netflix's original content gets depreciated on an accelerated basis, meaning more of the costs are booked up front.

But other costs rose as well, most notably marketing. Netflix poured $730.4 million into marketing during the fourth quarter, a 57% jump compared to the prior-year period. That's a much larger increase than the 27% revenue growth and the 26% paid subscriber growth reported by the company.

Why is Netflix's marketing spending outpacing its revenue growth? There are two reasons. 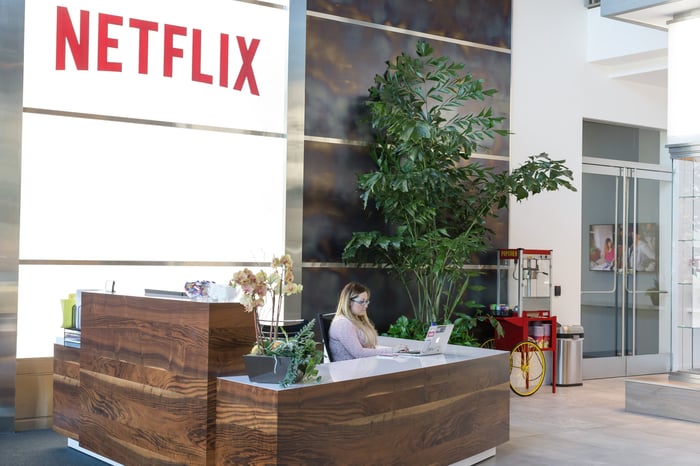 Netflix now has 58.5 million paid subscribers in the U.S., along with another 2 million users on a free trial. That's less than half the total number of households, but the company is clearly running out of runway in its home market. Netflix added 1.53 million paid U.S. subscribers in the fourth quarter, but its customer acquisition costs are through the roof.

Netflix spent $312.7 million on U.S. marketing in the fourth quarter, up 48% year over year. That works out to a whopping $204 for each net new paid subscriber. Looking at trailing-12-month numbers, it's clear that the fourth quarter was not a fluke. 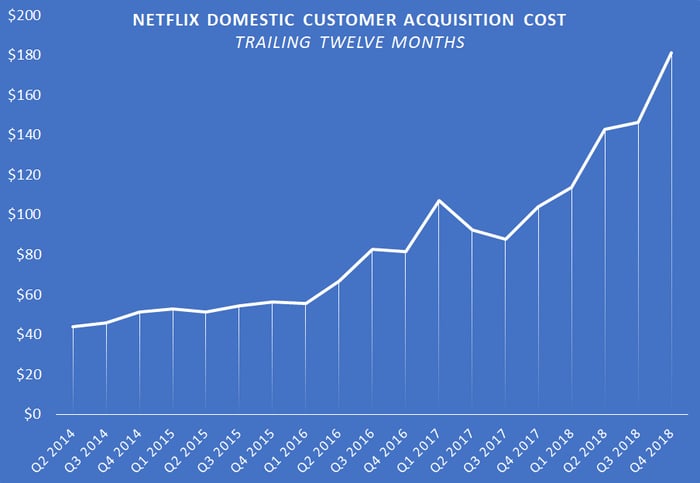 Winning a new U.S. customer now costs Netflix more than four times what it cost a few years ago in terms of marketing spend. One factor is that the company is simply running out of households that don't have a subscription or don't use the account of a friend or family member. Another factor could be increased churn. Netflix doesn't disclose how many users drop the service, so there's no way to tell.

This increased difficulty winning U.S. customers comes before a fresh batch of competitors arrive. Disney plans to launch a streaming service this year; AT&T will expand its streaming offerings by the end of the year; Apple is rumored to be close to rolling out a streaming service of its own. These new services will join other Netflix competitors like Hulu, Amazon.com's Prime Video, and a slew of skinny TV bundles like Philo and Hulu's Live TV offering. Winning customers is only going to get harder and more expensive for Netflix.

Not all of the increase in Netflix's marketing spending was due to escalating customer acquisition costs. Netflix reclassified certain personnel costs in the fourth quarter, moving that spending from general and administrative to cost of revenues and marketing. That change didn't affect the bottom line, since it's just shifting numbers around. But it was one factor behind the increase in marketing spend.

Another year of burning cash

Despite a price increase announced earlier this month, Netflix still expects to burn around $3 billion in cash this year. Content spending is the main driver of this cash burn, but high marketing spending will also play a role. Winning new customers requires not only escalating content spend, but escalating marketing spend as well.

Netflix does expect its free cash flow to begin to improve in 2020 and beyond. Whether it will ever be high enough to justify the stock's exceedingly optimistic valuation remains to be seen.