Investors are underestimating this entertainment titan.

Sports are big business. In fact, some estimates place the size of the global sports industry as high as $1.3 trillion. Companies that cater to this massive market -- and the billions of sports fans worldwide -- stand to earn a fortune.

The challenge, of course, is identifying the best investments within this enormous market. These are the businesses that can successfully adapt to constantly changing industry trends -- and whose stocks currently trade for bargain prices.

Fortunately, we can invest in one such business today.

Sports fans know the ESPN brand well. Yet you might not know that The Walt Disney Company (DIS -1.35%) owns 80% of the sports entertainment powerhouse. As such, Disney's stock gives investors an intriguing way to profit from the global popularity of sports.

Fears regarding cord-cutting have weighed on Disney's shares for quite some time. The company's media networks segment -- of which ESPN is the largest component -- generated more than 40% of Disney's operating profits in 2018. So, the trend of people canceling their cable subscriptions in favor of cheaper streaming options is understandably concerning for Disney shareholders. And with recent subscriber figures suggesting that cord-cutting may be accelerating, even the staunchest of Disney bulls should be sure to factor this threat into their analysis of the stock.

However, I'd argue that much of this risk is already factored into Disney's stock price. Over the past five years, Disney's price-to-earnings ratio has declined by 35%. In turn, its share price has risen by less than 50% during this time, even as its earnings surged by nearly 115%. Said differently, Disney's stock is now significantly cheaper per dollar of earnings than it was five years ago. 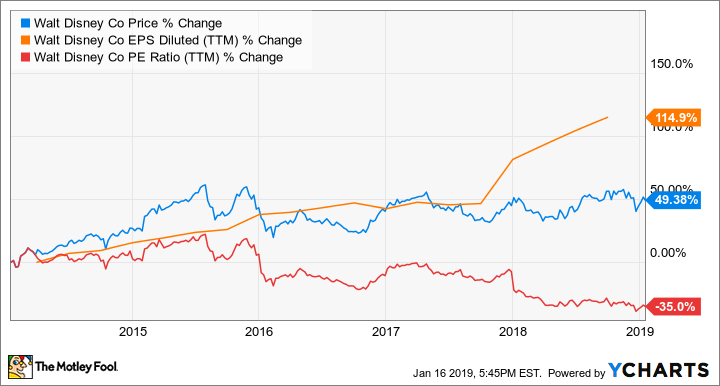 In turn, with its shares now trading for about only about 15 times analysts' earnings estimates for the year ahead, Disney's stock is quite a bargain at current prices.

Signs of a bright future in streaming

Moreover, Disney is taking action to mitigate its cord-cutting-related subscriber losses at ESPN. The company launched its direct-to-consumer (DTC) ESPN+ streaming service in April. For only $4.99 per month, ESPN+ gives subscribers access to a host of live sporting events that will not be aired on ESPN's cable networks. It also includes an on-demand library of ESPN's documentaries and exclusive content, such as the critically acclaimed show Detail, hosted by NBA and NFL legends Kobe Bryant and Peyton Manning.

ESPN+ is off to a fast start. Disney announced in September that the fledgling streaming service had already garnered more than one million paid subscribers. "The early growth trajectory of ESPN+ is very encouraging, and we believe it bodes very well for our overall global DTC strategy," Disney CEO Bob Iger said during the company's fourth-quarter earnings call.

ESPN+ is geared toward sports fans who want even more content than is currently found on ESPN's cable networks -- not as a replacement for ESPN's existing programming. But to Iger's point, the service's early success could also help to alleviate investors' fears regarding Disney's ability to transition its core ESPN properties to a DTC streaming model in the future. That could go a long way toward enticing investors to once again pay a higher price-to-earnings multiple for Disney's stock. And that -- combined with a host of other growth catalysts -- could send Disney's shares soaring in the year ahead.

3 Dates for Disney Stock Investors to Circle in February
413%