The overseas expansion is critical.

After an initial period of challenges and delays for Model 3 production that Tesla (TSLA 1.24%) CEO Elon Musk referred to as "production hell," Model 3 manufacturing saw significant improvements in the second half of last year. Deliveries of the vehicle in the third and fourth quarter of last year were 55,840 and 63,150 units, respectively. These deliveries were up from a total of about 26,000 Model 3 deliveries in the first half of 2018.

While higher Model 3 production and deliveries have helped the automaker swing to a profit, this was only accomplished by prioritizing deliveries of higher-priced Model 3 variants in North America. But the market for high-end Model 3's is only so big -- and there are signs Tesla is coming close to maxing out sales of pricey Model 3 variants in its current markets.

Fortunately, Tesla still has more major global markets to expand to where it can try to take full advantage of pent-up demand for the vehicle before it brings to market lower-cost versions. One of these markets is Europe, where Tesla is getting ready to begin Model 3 deliveries. 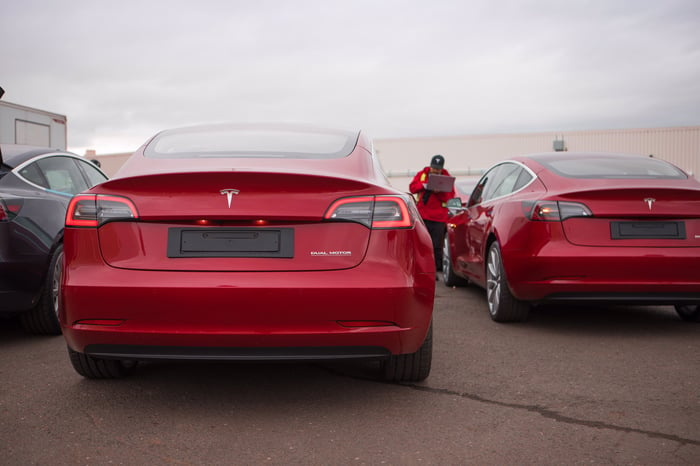 Netherlands Vehicle Authority (RDW) cleared the Model 3 for deliveries in Europe, reported Bloomberg on Monday. The approval suggests the automaker is on track with its plan to expand Model 3 deliveries to the key market by February.

"European Model 3s off the production line," Tesla said in a tweet that showed a photo of several Model 3s on Monday.

Tesla is optimistic about the European market. Management noted in the company's third-quarter shareholder letter that the "mid-sized premium sedan market in Europe is more than twice as big as the same segment in the US." While this suggests there's meaningful upside for deliveries of Tesla's high-end Model 3 variants, investors should also keep in mind that the electric-car maker's current Model 3 delivery volumes in North America may not be sustainable until lower-cost versions are introduced. Otherwise, Tesla likely wouldn't be cutting the price of the vehicle.

Also helping support sales of Tesla's current Model 3 variants, which start at $44,000 in the U.S., will be the company's expansion to China. In the company's Jan. 2 update on its quarterly vehicle production and deliveries, Tesla said it also plans to expand Model 3 deliveries to China in February.

Aiming for improved economies of scale

There's more to Tesla's overseas expansion than the higher sales it will bring for the electric-car maker. The company's global expansion of its higher-end Model 3 versions is part of its plan to achieve improved economies of scale so it can finally launch its promised $35,000 version, which will have a lower profit margin than high-end versions. Indeed, the effort is so important that Tesla recently announced plans to cut about 7% of its full-time employees, aiming to keep costs down as it works to finally bring the more affordable version to market.

"Tesla will need to make these cuts while increasing the Model 3 production rate and making many manufacturing engineering improvements in the coming months," Musk said in a letter to employees that was posted on its blog last week. "Higher volume and manufacturing design improvements are crucial for Tesla to achieve the economies of scale required to manufacture the standard range (220 mile), standard interior Model 3 at $35k and still be a viable company."

It would be difficult to overstate the importance of Tesla's global expansion for high-end Model 3 variants. As Musk emphasized in his letter to employees last week, "There isn't any other way."

Of course, if deliveries in North America are any indication of how demand for the vehicle will play out in Europe and China, the company shouldn't have any problem selling the vehicle overseas. The Model 3 was the best-selling premium vehicle in the U.S. last year, including both luxury cars and SUVs.