The CRISPR-focused biotech stock plunged following the surprising resignation of its CEO.

Shares of Editas Medicine (EDIT 0.81%) have crashed 21.2% as of 11:09 a.m. EST on Tuesday. The biotech has announced the unexpected departure of CEO Katrine Bosley, who had led Editas since 2014. Editas Medicine's press release stated that Bosley will step down as president and CEO effective March 1, 2019. Bosley also resigned from Editas' board of directors.

Whenever there's a sudden departure of a top executive, it raises questions about what could be going on with a company. That's especially the case for Editas Medicine, since CFO Andrew Hack also left in December to join Bain Capital. 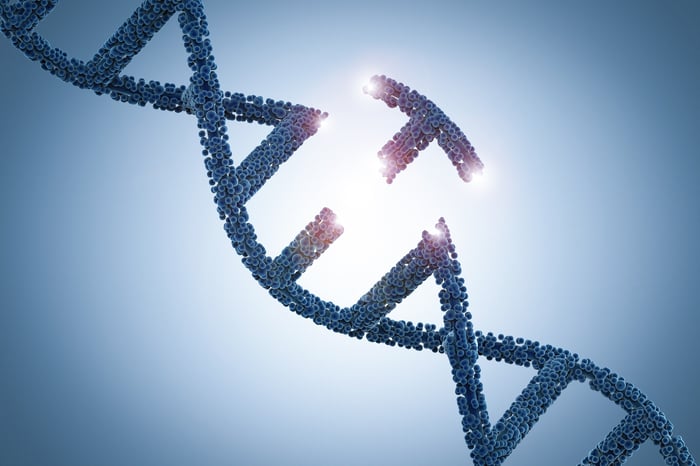 Editas didn't provide any details of Bosley's exit as CEO. Bosley tweeted Tuesday morning that leaving Editas "was a tough decision" but didn't say why she is stepping down.

Just a few weeks ago, Bosley stated at the J. P. Morgan Healthcare Conference that it was "an incredibly exciting time" for Editas. She sounded optimistic about the biotech's prospects and gave no hints that she would soon be leaving the company.

At this point, there's simply no way to know for sure why Bosley left. It's possible that the underlying reasons behind her resignation (and potentially Hack's exit as CFO also) could change the investing thesis for Editas Medicine. However, it's also possible that the departures of these top executives have nothing to do with the long-term prospects for the biotech.

Editas Medicine appointed Cynthia Collins as interim CEO. Collins is a member of the company's board of directors and has an impressive resume in the healthcare industry. Editas has initiated a search for a permanent replacement for Bosley.

The biotech also continues to advance its lead pipeline candidate, EDIT-101. Editas expects to screen patients in the first half of this year for a phase 1/2 clinical study evaluating the CRISPR gene editing therapy in treating Leber congenital amaurosis type 10 (LCA10), the leading genetic cause of childhood blindness.

Investors who already own Editas stock probably should do nothing for now, despite the questions raised by Bosley's departure. On the other hand, investors considering buying Editas might want to hold off until the dust settles.

Why Editas Medicine Was Winning on Wednesday
357%