Cannabidiol-based products look to be the next big thing in retailing.

We get it: Legal weed is the next big thing, and companies better get on board now or risk being left behind. While an argument can be made for brewers and distillers infusing their beverages with marijuana extracts, and maybe for restaurants starting to offer edibles to customers, is there any good reason for a shoe retailer to get into the business? 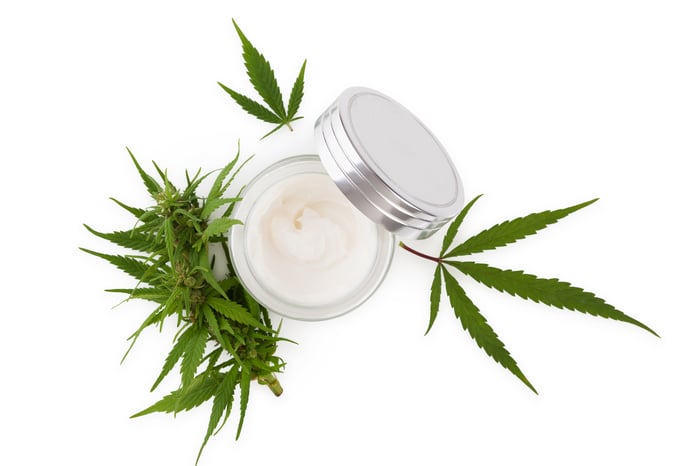 CEO Roger Rawlins said that the "widespread adoption of the use of CBD products" in North America represented a shift in consumer behavior that is shaping the retail industry, and he "could not be more excited about our partnership with Green Growth Brands and the introduction of their products to our customers."

DSW has begun experimenting with a variety of concepts that stray from its core shoe-selling business, such as putting a nail salon inside one of its stores and designing a physical store to mimic an online one, with displays on wheels so employees can change the look of a department at will. These so-called lab stores are where DSW is incubating ideas before rolling them out nationally.

Although the idea to sell muscle balms, body lotions, body washes, and foot creams made from CBD didn't necessarily spawn from one of these labs, the products were tested at 10 locations. According to Green Growth, almost three quarters of the products sold out during the first 10 weeks of the test, which far exceeded anyone's expectations.

There's a sense that DSW is getting in ahead of the competition in this field. In December, the 2018 Farm Bill was signed into law, clarifying the legal status of hemp and its extracts as well as how they can be sold, potentially opening up the retail market to a variety of CBD-based products. Specialty retailers like DSW will undoubtedly be in the forefront of showcasing the products, but mass merchandisers and e-commerce providers will likely get into the business, too.

That competition is the primary challenge for big-box stores like DSW. Being able to differentiate themselves early on could be key to remaining relevant when the largest retailers enter the space. As one of the largest footwear retailers in the country, DSW has the potential to change the perspective for many.

DSW operates nearly 1,000 stores, so the Green Growth partnership isn't going to be generating significant sums of money for the shoe company, and there's still some question of whether topical CBD lotions are even efficacious.

Providing customers with ancillary products, accessories, and services is one thing, but DSW risks becoming distracted by offering a hodgepodge of unrelated and disjointed amenities.

After suffering from a period of slack sales, DSW has regained its footing and sparked growth throughout 2018. Through the first nine months of the year, net sales were up 12%, and gross profit had widened by 220 basis points to generate margins of 31.3% of revenue. Operating profit jumped 28% year over year.

Cannabidiol-infused products are likely to be a major growth driver for retailers that find the right ones. Lotions and potions may not be it for DSW, but at least it's taking a go-slow approach before diving head-first into projects that could end up being a big miss.