Here's what happens when you build too much capacity.

Chip manufacturing is exceptionally complex, requiring a company to spend billions of dollars in research and development each year to figure out how to build next-generation chips, as well as billions more on the equipment required to actually manufacture those chips.

Taiwan Semiconductor Manufacturing Company (TSM 1.97%) began production of its latest 7-nanometer technology in the first half of 2018. One of the earliest -- and largest -- customers of that 7-nanometer technology is Apple (AAPL 1.21%), which uses it to build the A12 chips that power the company's latest iPhones, as well as the A12X chips inside of its newest iPad Pro tablets. 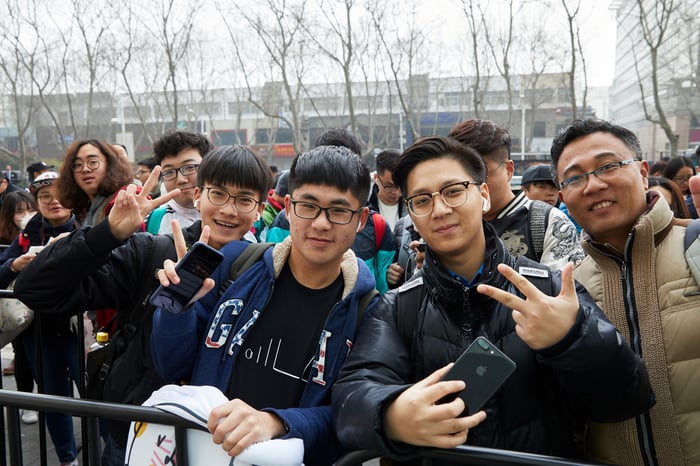 Unfortunately for both Apple and TSMC, sales of the former's latest iPhones aren't going as well as planned. In fact, Apple had to reduce its financial guidance for its most recently ended quarter because demand for those devices fell well short of its original projections.

While Apple's shortfall is set to manifest itself in the form of reduced revenue for TSMC, there's another way that this is hurting TSMC.

For the first quarter of 2019, TSMC says that its gross margin will come in between 43% and 45% -- a dramatic drop from the 47.7% that it enjoyed in the previous quarter. TSMC CFO Lora Ho blamed the lower gross margin forecast on "a lower utilization due to the overall weakening macroeconomic environment, the mobile product seasonality and the high level of inventory in the supply chain."

The executive provided some additional granularity, stating the following: "Due to the recent changes in high-end smartphone business conditions, our 7-nanometer capacity will see a substantial cutback on utilization rate in [the] first quarter and second quarter, which is expected to hit our gross margin by more than four percentage points in each quarter."

The question you might be asking yourself, then, is why the lower capacity utilization has such a deleterious effect on the company's gross margin. The answer requires a little explanation.

A company like TSMC needs to spend significantly on capital expenditures (CapEx) -- that CapEx is the money that's spent to build and equip chip manufacturing factories. Those expenses don't hit the company's income statement right away, though. The value of that equipment shows up in the income statement in the form of depreciation (this impacts cost of goods sold) over what the company determines the useful life of that equipment to be.

The problem with having an underutilized factory is that whether TSMC is actually using its equipment to produce chips or not, it's still dealing with the depreciation costs each quarter. If that equipment is being fully utilized to produce and sell product, then the company is bringing in more revenue relative to depreciation charges than it would if, say, half of the equipment was sitting around building no salable product.

What's TSMC planning to do about this?

In the near term, TSMC can't really do anything about this situation -- that's why the company outright admitted that it would suffer 400-basis-point reductions to its gross margin in both its first and second quarters. Ho did say on the call, however, that the organization will be "working closely with customers for more effective capacity planning" in a bid to "better manage our leading-edge utilization rate."

While this is good to hear, the problem in this case is that Apple is such a large customer. For TSMC to be able to meet the entirety of Apple's demands, it needs to ensure that it has a massive amount of capacity in place. It looks to me that Apple told TSMC that it expected a certain level of demand and, therefore, needed a certain amount of capacity in place to service it, but the demand just turned out to be lower than anticipated.

It will be interesting to see how TSMC manages the risk of Apple orders potentially falling short of expectations in the coming years.