Shares of STMicroelectronics(NYSE:STM) have popped today, up by 11% as of 12:20 p.m. EST, after the company reported fourth-quarter earnings results. The semiconductor specialist beat expectations for both revenue and profit.

Revenue in the fourth quarter rose 7% to $2.65 billion, which translated into net income of $418 million, or $0.46 per share. Analysts had been modeling for $2.64 billion in sales and earnings per share of $0.44. Gross margin contracted to 40%, while operating margin expanded modestly to 16.8%. Sales in the company's microcontroller business declined, but automotive, imaging, and power discrete revenue jumped. Free cash flow more than doubled to $363 million. 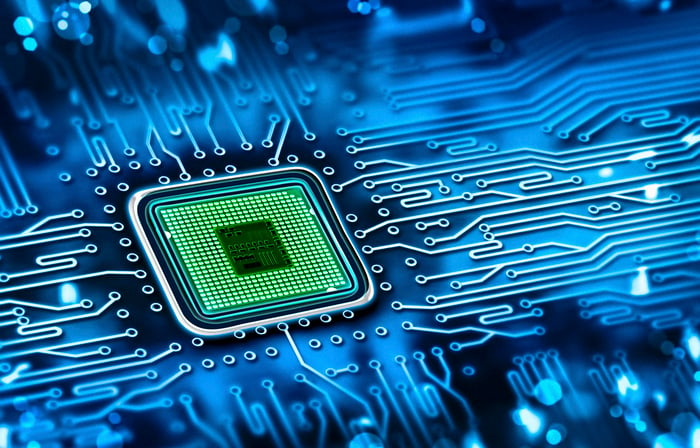 "2018 has been an important year for ST," CEO Jean-Marc Chery said in a statement. "In line with the objectives we had set, we achieved significant revenue growth across our product groups, as well as a strong expansion of profitability and cash flow from operations."

In terms of guidance for the first quarter, STMicroelectronics expects revenue to fall 20.7% on a sequential basis, plus or minus 3.5 percentage points. Gross margin should be approximately 39%, plus or minus 2 percentage points. After that seasonal hiccup, the company says revenue should return to sequential growth in the second quarter, followed by "an acceleration in the second half of the year." That forecast for the rest of 2019 encouraged investors.

The semiconductor maker expects 2019 capital expenditures to be in the range of $1.2 billion to $1.3 billion, which includes maintaining its current manufacturing facilities, as well as expanding capacity for silicon carbide and ramping production of gallium nitride for RF devices.