Please ensure Javascript is enabled for purposes of website accessibility
Free Article Join Over 1 Million Premium Members And Get More In-Depth Stock Guidance and Research
By Adam Levine-Weinberg - Updated Apr 23, 2019 at 12:00AM

The electric-vehicle pioneer can't build a $35,000 Model 3 profitably, and there are only so many customers willing to pay up for pricier versions of Tesla's "affordable" car.

However, in the background, warning signs about the sustainability of Tesla's performance have been building up. Unfortunately, CEO Elon Musk is only now acknowledging the extent of the challenges the company faces, which has created an unnecessary crisis for the electric-vehicle pioneer.

Earlier this month, Musk sent a letter to Tesla employees announcing that the company had to cut about 7% of its full-time workforce. He noted that Tesla is on track to post a second straight quarterly profit for the fourth quarter, but that it will earn less money than in Q3. Furthermore, he expects Tesla's earnings to continue to trend lower in the first part of 2019. The underlying problem is simple. As Musk stated in his letter (via CNBC), "While we have made great progress, our products are still too expensive for most people." He continued:

In Q3 last year, we were able to make a 4% profit. While small by most standards, I would still consider this our first meaningful profit in the 15 years since we created Tesla. However, that was in part the result of preferentially selling higher priced Model 3 variants in North America. ... [S]tarting around May, we will need to deliver at least the mid-range Model 3 variant in all markets, as we need to reach more customers who can afford our vehicles. Moreover, we need to continue making progress toward lower priced variants of Model 3.

Today, the cheapest Tesla you can buy costs $44,000 before the impact of any tax credits. For the first year or so after Model 3 sales began, the cheapest available option cost $49,000. And many customers so far have opted for even pricier variants. The higher-priced models are dramatically more profitable for Tesla than a hypothetical $35,000 Model 3 would be.

As impressive as Tesla's Q3 surge to profitability was, it isn't necessarily sustainable unless the company can either dramatically reduce its manufacturing costs or permanently keep Model 3 average transaction prices above $50,000.

The signs have been there to see

In the past six months or so, it has become painfully obvious that Tesla is reaching the limits of demand for pricier Model 3 variants, at least in its main market of North America. 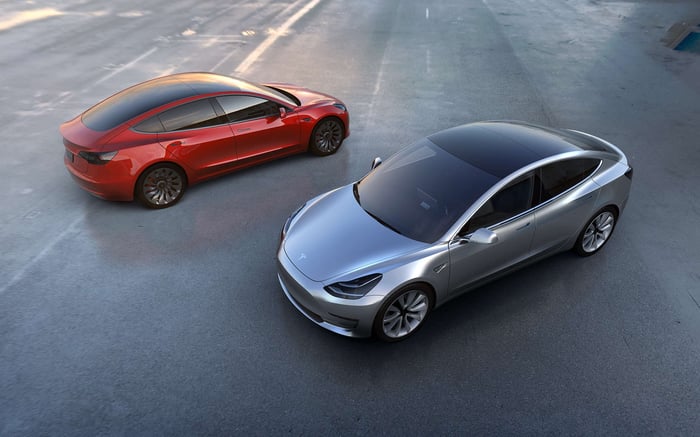 For example, in July, the company began allowing potential customers willing to pay up for a premium version of the Model 3 to skip the line of reservation holders waiting for lower-priced variants. In October, Tesla guaranteed that all orders placed by Oct. 15 would be eligible for the full $7,500 federal electric-vehicle tax credit (which was scaled back to $3,750 for deliveries in the first half of 2019 and will phase out entirely at the end of this year) and then introduced a slightly cheaper mid-range Model 3 variant. Lastly, Tesla implemented an across-the-board $2,000 price cut in the U.S. earlier this month.

In short, while there was ample pent-up demand for $50,000-plus Model 3s in 2017 and the first half of 2018, Tesla has already addressed most of that demand. Furthermore, with production ramping up, it needs to sell more cars each quarter than it did in the prior quarter. And in the U.S. -- Tesla's largest market -- the phaseout of the EV tax credit is another headwind.

For now, Tesla has been able to avoid introducing the profit-killing $35,000 Model 3, through a combination of the tactics noted above and beginning deliveries of pricier variants outside North America. Yet that's only a temporary solution. At some point in 2019, Tesla will need to either reduce production or -- more likely -- make the $35,000 Model 3 available.

The auto industry is a tough business under any circumstances. Tesla faces the added pressure of being a young company with a unique business model and heavy reliance on just a few products.

That said, the supposedly urgent crisis requiring Tesla to slash costs so it can reduce prices is largely self-imposed. Thanks to its phenomenal growth over the past two years, it's had ample opportunity to raise $5 billion, $10 billion or more through stock sales or debt issuances to support its growth. However, Musk has been bizarrely reluctant to raise capital recently.

If Tesla had a big cash cushion, it could afford to steadily reduce prices -- even if doing so would lead to short-term losses -- as long as production costs were steadily declining at the same time. Instead, Tesla is trying to thread the needle of gaining scale and reducing its costs without incurring significant near-term losses.

Perhaps Elon Musk can pull off another miracle. But if he had been less stubborn about raising capital in 2017 and 2018, Tesla wouldn't need one.