Despite a new partnership and promises of profitability, the meal kit maker may not succeed.

Shares of Blue Apron (APRN 2.94%) continue to run higher after the company reaffirmed its fourth-quarter guidance for achieving profitability on an adjusted EBITDA basis and said demand for its meal kits from customers of WW (WW -7.99%) was higher than expected.

Make no mistake: The stock is still severely depressed and trades around $1.32 per share, but that's almost 26% higher than where it was before the announcement. While Blue Apron is getting some good mileage from the news and its partnership with WW (formerly Weight Watchers), investors should remain wary because not much has changed for its business. And there are warning signs that the stock could break down again. 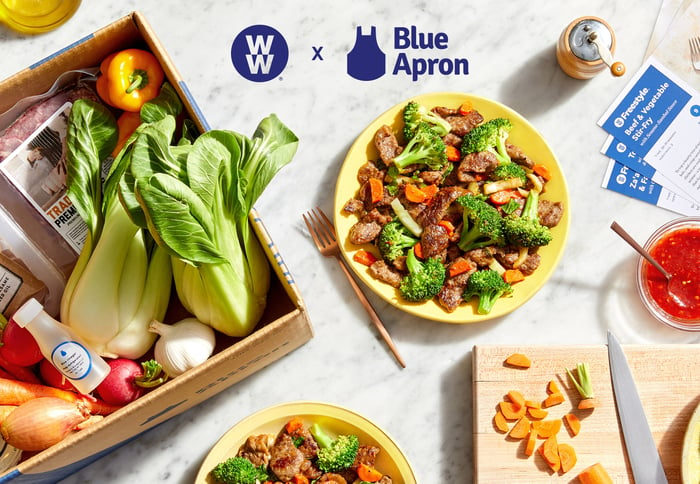 A three-point plan for change

It's notable that in the release, no mention was made of the metrics that matter to its business: the number of customers, the number of orders they place, average value of the orders, or the revenue per customer it generates. If those numbers are moving higher, then Blue Apron has something to boast about. Otherwise it's largely blowing smoke.

The meal kit specialist continues to believe its adjusted EBITDA will show a profit in the first quarter of 2019 as well as for the full year. However, the basis for that guidance was not necessarily an improving business environment, but rather three primary initiatives:

The problem: This only makes Blue Apron a leaner business, not a better one. It doesn't boost the number of customers ordering its meal kits.

Partnerships like those with WW have the potential to bring in new customers without Blue Apron having to do much marketing, if any. Previously the only way it was able to attract new customers was to spend heavily on promoting its meal kits, and it needed to continuously do so because its customer retention rates are appalling. By hitching itself onto WW, Blue Apron lets the weight-loss leader do more of the heavy lifting (WW is paid a fee whenever a member purchases a meal kit subscription).

There is concern over how successful this strategy will be. WW has its own meal kits, and it has tried partnerships before, though the venture was subsequently ended. WW investors might also be concerned that their company will turn into Nutrisystem and instead of empowering members to make smart food choices on their own, it will simply spoon-feed them the necessary meals.

Demand for Blue Apron's meal kits might very well be higher than expected after climbing onto WW's coattails, but it doesn't mean it's sustainable. WW customers could just be trying out the kits, like most other customers do, and then they will cancel the service, too.

Cutting to the bone

Next to marketing spend, Blue Apron's PTG&A expenses are one of its biggest line items, and it has been able to cut those costs significantly by reducing overhead and managing its personnel better. It announced last November it was eliminating 4% of its workforce and saving around $16 million in a bid to improve its chances of profitability.

Blue Apron's Linden, New Jersey, fulfillment center has allowed greater operational efficiency, but there are limits to how much further it can go. Together with PTG&A expenses, there's only so much money to be wrung out, and then you have to grow the business.

Blue Apron has shown no real propensity for doing that, and in fact, the metrics all point to the opposite. The WW partnership obviously isn't bad, but unless it helps really turn Blue Apron around, which doesn't seem feasible, the meal kit company may yet have to explore finding a strategic partner to buy it out to survive.