The latest installment in the DC Comics extended universe is the best.

Aquaman created a tidal wave of support at the box office, swelling above the $1 billion mark for worldwide box office receipts since its release last month. It marks the first time a movie in the DC Comics extended universe (DCEU) has reached that threshold and puts the underwater superhero second in receipts only to The Dark Knight Rises, another DC Comics movie.

Because Aquaman has yet to open in Japan, it's likely the movie will be the top-grossing comic for AT&T's (T -0.93%) Warner Bros. studio and could breathe new life into the DCEU. 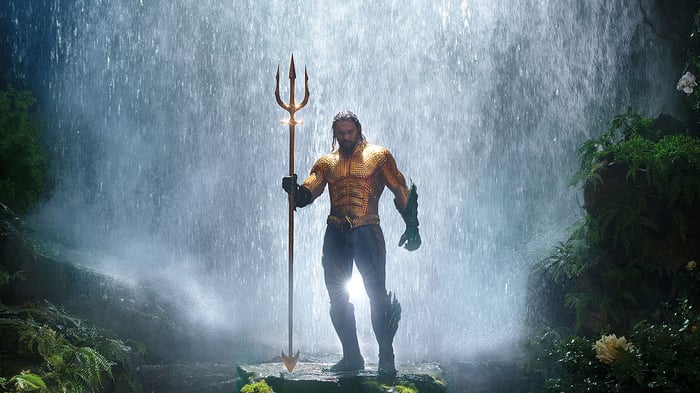 The term "extended universe" references films whose movie plots and characters share a creative world and often make mention of one another. For DC Comics, this began with Man of Steel in 2013 and has continued through Batman v Superman: Dawn of Justice, Suicide Squad, Wonder Woman, Justice League, and now Aquaman.

Moviegoers, though, are probably more familiar with the connected worlds of Walt Disney's Marvel characters that successfully allow Iron Man, The Avengers, and Captain America to live at the same time in each other's worlds and movies. The success that Marvel has enjoyed, and the seeming ease with which it has done so, that has tempted others to try their hand at it.

Toy maker Hasbro, for example, has, er, toyed with the idea of creating a connected cinematic universe with Viacom's Paramount Pictures and somehow pairing up the rather disjointed characters of G.I. Joe, The Micronauts, and Visionaries, who would all interact with characters from M.A.S.K. and ROM.

The just-released movie Glass from M. Night Shyamalan shares a cinematic existence with 2000's Unbreakable starring Bruce Willis and 2017's Split with James McAvoy, while Warner Bros. is attempting to create a separate monsters universe for Godzilla and King Kong with Legendary Entertainment. Comcast's Universal also attempted to create a connected world from classic monster movies like The Mummy, Frankenstein, and The Invisible Man, but after The Mummy bombed at the box office (just $80 million in domestic receipts), that effort may be over with.

All too often, studios use the connected universe to prop up otherwise weak franchises, and as many of the failures indicate, it's not as simple as Marvel has made it look.

Which is why Aquaman's success is critical to reviving DC Comics' hopes its universe can get back on track. The other films in the portfolio have been hit or miss at the theaters, with Wonder Woman receiving acclaim and generating over $812 million worldwide, while both Batman v Superman and Suicide Squad were panned, receiving a 40% and a 27% rating, respectively, at Rotten Tomatoes, though each did well at the box office. Wonder Woman received a 93% rating.

Aquaman has largely been both a critical and box office success, and to date has hit $1.06 billion in box office receipts. The Dark Knight Rises made over $1.08 billion, so Aquaman's Feb. 8 opening in Japan should put it over the top.

Aquaman director James Wan seemed to accept the material he was working with and made the movie large in all ways, almost over the top. It probably doesn't hurt that actor Jason Momoa plays the title character. Momoa has helped turn the film into the eighth-highest-grossing live-action superhero movie made and has probably created a new franchise for DC and Warner.

Aquaman also helps Warner Bros. retain its title as the leading studio so far this year, with a 28% share of the market, according to film site BoxOfficeMojo. That puts it ahead of Sony's Columbia, with a share of less than 22%, and Buena Vista, at around 14%. But the year is long, and Warner Bros. has been a perennial second- or third-place finisher; the last time it held the top spot was in 2013.

Although a sequel has not yet been officially announced, Aquaman has set up the potential for one. It seems likely that its box office success will engender at least one more film to add to the canon and help keep DC Comics moving forward.