In a down market, these stocks did particularly badly. Find out why.

Monday wasn't a pleasant day on Wall Street. The Dow Jones Industrial Average fell more than 200 points, and other popular benchmarks were generally down around 1%. After the stock market saw such a strong start to the year, some investors fear that a reversal is imminent, especially if high-profile earnings reports later this week turn out badly. Adding to the downbeat mood was some bad news from several prominent companies. Vale (VALE 2.26%), Rite Aid (RAD 6.71%), and Advanced Micro Devices (AMD 2.69%) were among the worst performers. Here's why they did so poorly.

Shares of Vale dropped another 18%, adding to its decline on Friday in the wake of the breach of one of its tailings dams in southwestern Brazil. The death toll from the breach, which sent water flooding into nearby homes, reached 60 as of midday Monday, and Vale said that it would suspend dividend payments as well as share repurchases pending further investigation of the accident. With government investigations beginning, Vale shareholders worry that fines and other penalties could prove devastating to the mining giant, especially given past incidents similar to this one. 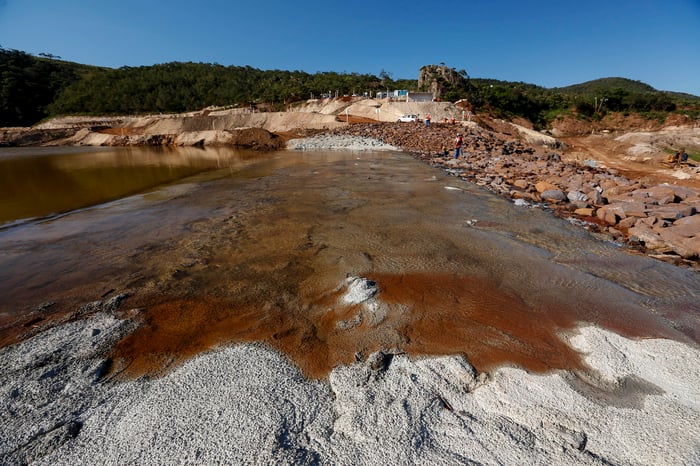 Shares of Rite Aid dropped more than 3% following an announcement on Friday that the drugstore chain would implement a reverse stock split. With the stock price having dropped below $1 per share, Rite Aid risked violating New York Stock Exchange listing rules, and so it decided to pursue the measure. The company is considering 1-for-10, 1-for-15, or 1-for-20 reverse splits, which based on recent prices could push the share price to somewhere between $8 and $18 per share. The stock has bounced considerably in 2019, but it's still suffered huge losses compared to year-ago levels, and investors are on the fence about whether Rite Aid can survive and thrive in the long run.

Concerns chip away at AMD

Finally, Advanced Micro Devices stock closed lower by 8%. The semiconductor chipmaker had to deal with fallout from negative comments from its primary competitor in the graphics processing unit space, as NVIDIA warned that conditions in the market haven't been nearly as good as previously anticipated. Like NVIDIA, AMD has aimed at the higher end of the graphics chip market, and shareholders worry that the two companies might end up having the same experience. Investor will get a better reading on Tuesday, when AMD reports its latest financial results.

These 2 Stocks Got Crushed by the Market Today -- Are They Now Buys?

3 Stocks That Will Only Break Your Heart