The problems are piling up for the graphics chip specialist.

For the past few years, graphics chip company NVIDIA (NVDA -4.20%) could do no wrong. The gaming business was booming, demand for its data center products was exploding, and the company's self-driving car platforms brimmed with potential.

No more. NVIDIA guided for a substantial year-over-year revenue decline in the fourth quarter when it reported its results back in November. Some of that robust gaming growth was due to demand from cryptocurrency miners, which dried up once the prices of most digital coins plummeted. The resulting oversupply of graphics cards was the culprit behind the company's lackluster guidance.

What may have seemed like a temporary problem got a whole lot worse on Monday. NVIDIA took a hatchet to its already disappointing guidance due to weak gaming demand, particularly in China; lower-than-expected sales of its newest graphics cards; and delayed orders from some data center customers. The company now sees fourth-quarter revenue of just $2.2 billion, $500 million below its previous guidance, and down a whopping 24% year over year. 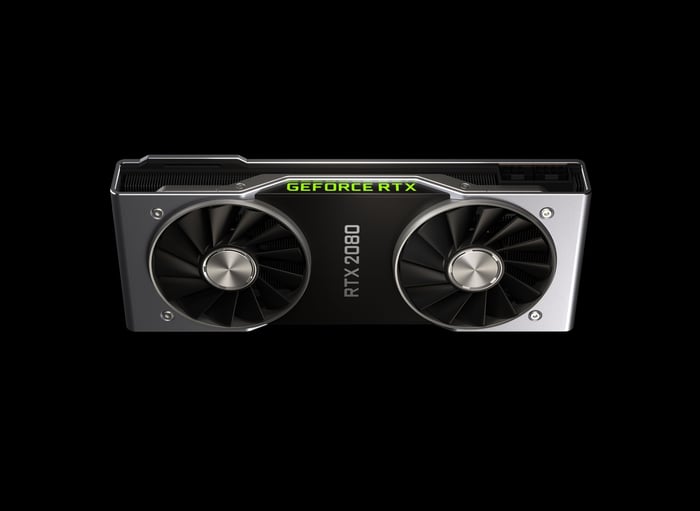 A slew of problems

NVIDIA said that it's been successful in reducing the excess inventory of midrange graphics cards in the channel. "The reduction in that inventory and its impact on the business have proceeded largely in-line with management's expectations," read the company's press release. But other problems have cropped up.

NVIDIA's latest gaming GPUs, the RTX 20 series, aren't selling as well as the company expected. That's not really a surprise -- they're overpriced relative to how much additional performance they brought to the table. NVIDIA included cutting-edge ray tracing hardware to justify its high prices, but gamers have apparently balked. "Some customers may have delayed their purchase while waiting for lower price points and further demonstrations of RTX technology in actual games," NVIDIA CEO Jensen Huang said in a letter to shareholders.

Gaming isn't NVIDIA's only problem. The data center business, which has been one of NVIDIA's growth engines, is sputtering. "As the quarter progressed, customers around the world became increasingly cautious due to economic uncertainties. A number of deals did not close in the last month of the quarter," Huang said.

On top of much lower revenue, NVIDIA expects its margins to plummet. I warned about the potential for tumbling margins in December, arguing that the stock wasn't as cheap as it looked.

NVIDIA expects a 56% non-GAAP gross margin in the fourth quarter, down from its previous guidance of 62.5%. While NVIDIA didn't provide earnings guidance directly, the company's revenue, margin, expense, and tax rate guidance implies non-GAAP EPS of about $0.75. That's down from $1.72 in the prior-year period.

"Q4 was an extraordinary, unusually turbulent, and disappointing quarter," Huang said. No kidding.

Not a bump in the road

NVIDIA will report its fourth-quarter and full-year results on Feb. 14. With the fourth quarter now officially in the books, the bad news is mostly out of the way.

I say mostly because NVIDIA's guidance for the first quarter and for fiscal 2020 isn't going to be pretty. The company still has excess inventory to work through, a process it expects to be done with by April. That will hurt the company's first-quarter results. High prices for its RTX graphics cards are a problem, and rival Advanced Micro Devices will soon launch a high-end graphics card of its own. AMD's new card is also expensive, but it brings competition to a price point that NVIDIA has dominated for years.

How long the data center malaise lasts is anyone's guess. The rapid-fire growth of cloud computing over the past few years wasn't going to go on forever. A hangover was inevitable. NVIDIA isn't the only company reporting data center trouble.

The days of NVIDIA reporting blockbuster results are over, at least for now. If profits tumble this year, the stock has a long way to fall.