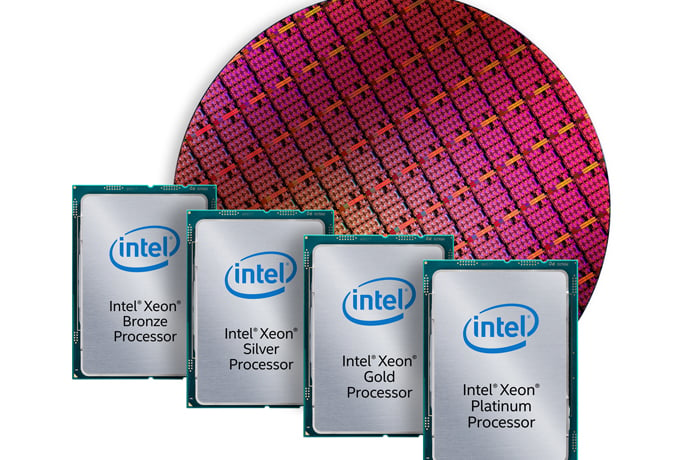 Let's take a closer look at what drove the results and guidance.

Intel had an iPhone problem

Intel is a supplier of cellular modems for Apple's (AAPL 0.00%) current iPhone offerings and the exclusive supplier of modems for Apple's freshest products: the iPhone XR, iPhone XS, and iPhone XS Max. A key factor in Intel's miss relative to expectations derived from weakness in modem sales. It's no secret that iPhone demand is proving disappointing, something that Apple confirmed when it issued a revenue warning on Jan. 2. Intel says that fourth-quarter modem revenue was roughly $200 million below its expectations, which accounts for about half of the $400 million total top-line miss.

Nevertheless, while the modem business did fall short compared to guidance, it's worth noting that the company's modem revenue was still up a solid 68% from the same quarter a year ago, as Intel went from being one of two modem suppliers in Apple's flagship iPhones to the sole vendor.

Back in October, Intel told investors that it expected its data center group (DCG) revenue to hit $6.3 billion in the fourth quarter of 2018. The company missed that guidance, raking in revenue of just $6.1 billion -- $200 million below expectations. This accounts for the remainder of the full-year revenue miss for 2018.

Inside the 2019 guidance miss

Analysts had expected Intel to guide for 2019 revenue of $73.25 billion and EPS of $4.55. The revenue expectations, unfortunately, turned out to be overly optimistic to the tune of nearly $2 billion, although the company forecasts EPS of $4.60, which is slightly above consensus.

In its earnings presentation, Intel provided a reconciliation between its view of 2019 from back in October and what it's thinking is now. While the company's capital expenditure (CapEx), tax rate, and gross margin expectations are approximately "consistent with [Intel's] October assessment," its view of operating margin deteriorated from about flat relative to 2018 to down less than a percentage point.

In case you were wondering, Intel guided for CapEx of $15.5 billion for 2019 (up from $15.2 billion in 2018), explaining that its CapEx related to logic chip manufacturing (think microprocessors) would be "slightly up," and that its memory CapEx would be "a little lower."

On the revenue front, Intel explained that "trade & [macroeconomic] concerns [are] intensifying...especially in China." In addition, major cloud service providers -- who had bought Intel processors at a vigorous pace over the course of 2018 -- are "absorbing capacity," and the company indicated that NAND flash pricing is "deteriorating." (This impacts the revenue and profitability of the company's nonvolatile memory solutions group, or NSG for short.)

A potential record year, but not great growth

If Intel actually hits its guidance for the entirety of 2019, then it will technically be able to report another year of record financial performance. However, revenue expansion of a little less than 1% isn't impressive, and the company's projected EPS growth of less than half of a percent is even less inspiring. Growth-oriented tech investors should look elsewhere for now as Intel's growth projections for 2019 simply aren't persuasive.