The burger giant is often the punch line for its rival's jokes.

Burger King is getting good at trolling McDonald's (MCD 0.74%). Last month, it sold its iconic Whopper for a penny if customers ordered one using its revamped BK app. The catch was, you had to order it while you were near a McDonald's.

Now the Restaurant Brands International (QSR 0.59%) chain is giving away its new Big King XL sandwich if Chicago-area customers trade in a McDonald's MacCoin, the commemorative coins the burger giant handed out last year to celebrate the 50th anniversary of the Big Mac. Chicago is the home of McDonald's corporate offices.

The butt of jokes

As the fast-food industry leader, McDonald's is often the target of attacks by competitors. Wendy's (WEN 0.00%), whose social media account is seen as one of the best in the business, routinely launches jabs at its rival.

Through it all, though, McDonald's never acknowledged the barbs or responded in kind. In fact, when McDonald's is on social media, it's only to tout its own product line. Amplifying the competition to score social media points is not part of the burger chain's playbook, and that's by design.

PRWeek says McDonald's doesn't believe leaders lead by playing defense. It quotes Jano Cabrera, McDonald's senior vice president for U.S. communications, global media, and PR, as saying: "You don't stay a leadership brand by simply responding to competition. You do it by continuing to innovate and staying customer-focused."

Put another way, actions speak louder than words. Wendy's might be winning on social media, but McDonald's is winning where it counts: in its restaurants. Through the third quarter of 2018, McDonald's has posted comparable-store sales that for seven consecutive quarters  substantially exceed those of Wendy's and oftentimes Burger King. 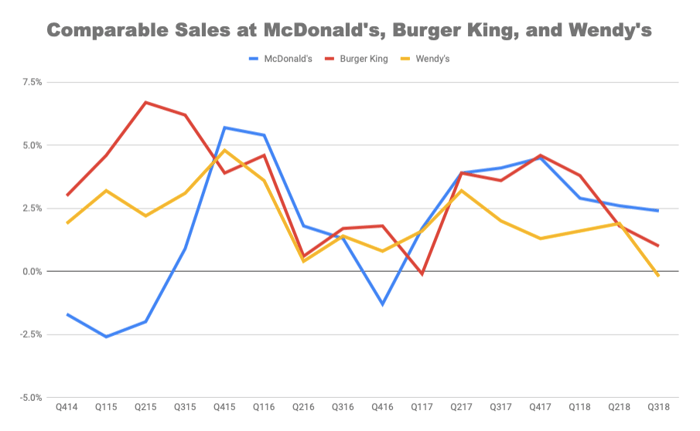 McDonald's has been through a lot of changes over the past few years as it sought to meet changing consumer tastes, getting itself back on track after losing a half-billion customers. So instead of trying to run its mouth as smoothly as Wendy's does, McDonald's concentrates on its customers' mouths. And there, its game is still as good, if not better, than the competition's.