From falling sales to higher tariff and recall costs, the iconic motorcycle company had a bumpy ride to end 2018.

Shares of Harley-Davidson ( HOG 0.00% ) were down 6.5% as of 2:30 p.m. EST Tuesday, after the motorcycle manufacturer announced disappointing fourth-quarter 2018 results.

More specifically, Harley's quarterly revenue declined 8.7% year over year to $955.6 million, translating to adjusted (non-GAAP) net income of $28 million, or $0.17 per share. Analysts, on average, were anticipating earnings of $0.28 per share on revenue of $1.05 billion. 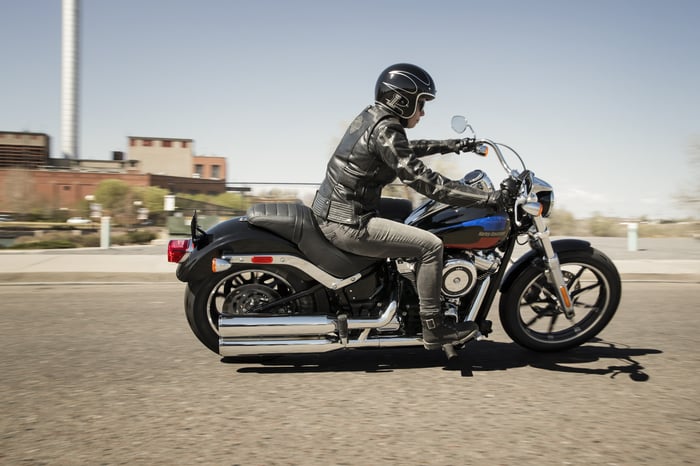 Harley's worldwide motorcycle sales fell 6.7% during the quarter, to 39,311 vehicles. But its weakness was the most pronounced in its core U.S. market, where motorcycle sales declined 10.1% to 20,849 vehicles. On the top line, revenue from Harley's motorcycle segment declined 6.6% this quarter to $738.2 million, parts and accessories sales dropped 15% to $142.2 million, and general merchandise revenue fell 18% to $58.4 million.

But if Harley's struggle to find growth wasn't enough, during the subsequent conference call management revealed that tariff costs this quarter climbed by $13.4 million, including increases in both the EU and China. Harley also took a $55 million hit this quarter under its selling, general, and administrative expenses, related to two voluntary recalls.

Harley plans to accelerate its "More Roads to Harley-Davidson" initiative in an effort to pull in 2 million new riders in the U.S., bring international sales to 50% of its total volume, and launch 100 new "high impact" motorcycle models by 2027.

In the end, Harley might well be taking all the right steps to return to sustained, profitable growth in the coming years. But given its relative underperformance to end 2018, and another expected decline in shipments this year, it's no surprise to see the stock falling today.