Please ensure Javascript is enabled for purposes of website accessibility
Log In Help Join The Motley Fool
Free Article Join Over 1 Million Premium Members And Get More In-Depth Stock Guidance and Research
By Daniel B. Kline - Updated Apr 24, 2019 at 7:58PM

The big game will still drive nearly $15 billion in sales of everything from TVs to nachos.

The Super Bowl has become a sort of American holiday that's not really even about the football game being played. For many, it's a day that's as much about television commercials, nachos, wings, and beer as it is about the matchup between the Los Angeles Rams and the New England Patriots.

People go to parties for the big game even if they don't plan to watch a down of the action. That makes the day a big one for retailers, grocery stores, sports bars, and any place that sells beer, wine, and liquor. 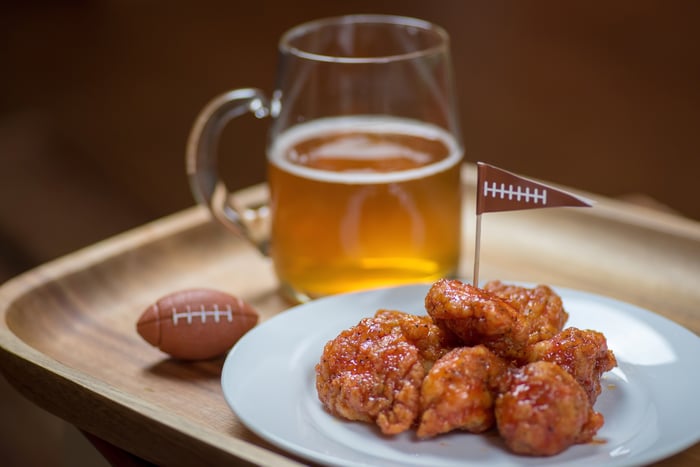 Americans spend big to celebrate the National Football League's championship game, though they won't quite match the record spent in 2016 (the last time the Patriots did not play in the game). This year, American adults will spend an average of $81.30 for a total of $14.8 billion, according to the annual survey released by the National Retail Federation (NRF) and Prosper Insights & Analytics.

This marks the third straight appearance in the championship game for the Patriots and head coach Bill Belichick and quarterback Tom Brady. It's also the ninth appearance for that coach/QB combo, and it's fair to say that Americans (at least those not living in or from New England) may be tiring of them.

That may explain why spending has dipped from a high of $15.5 billion for the last non-Patriots Super Bowl in 2016, to $14.3 billion in 2017, then $15.3 billion last year, and $14.8 billion this year. The big drop in 2017 was likely because the matchup featured the Patriots and the Atlanta Falcons -- both East Coast teams. Of course, 2018 also offered an all East Coast matchup (Patriots versus Philadelphia Eagles), but that game had a compelling story line with Eagles backup QB Nick Foles on a Hollywood-worthy roll heading into the game.

Average spending comes in nearly the same as last year's $81.17, the second-highest in the survey's history (after $82.19 in 2016). The overall spending number has dropped, however, because fewer people plan to watch the game (182.5 million this year from 188.5 million last year).

Of those who plan to watch, 79% plan to buy food and beverages, while 10% will purchase team apparel. In addition, 7% will buy decorations, and 7% plan to use the game as a reason to purchase a new television. About 60.9 million Americans expect to watch the game at a party and 13 million will watch in a bar.

"You don't have to be a football fan to celebrate the Super Bowl," NRF CEO Matthew Shay said in a press release accompanying the survey. "Whether it's to see who wins, watch the halftime show and commercials or just get together with friends, this is the biggest party since New Year's Eve." 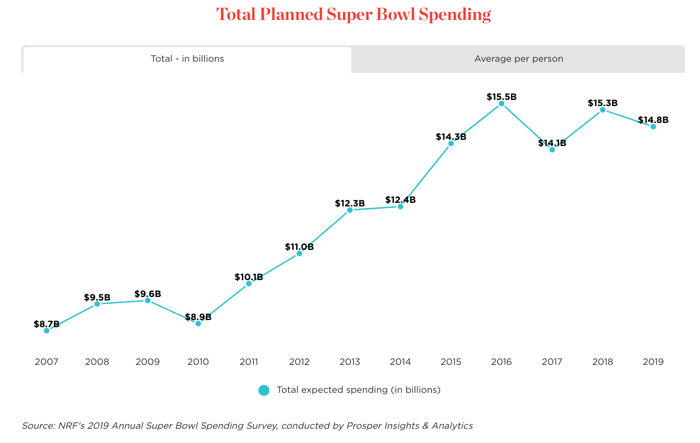 Whether you're drinking Sam Adams as a Patriots fan or making plans to leave early to beat traffic like a true Los Angeles sports fan, it's important to remain responsible. That applies to both alcohol consumption and your finances.

The big game is not an invitation to spend money you don't have or can't afford to spend even if you root for one of the teams. Buying a TV because you're hosting a party only makes sense if you've done your homework and checked your finances.

Root for your team (or against the Patriots) or just watch for the ads. Have fun, eat some wings, have a drink or two. Just remember that the game airs on free television and you don't have to spend any money on it if you don't want to (or can't afford to).