Please ensure Javascript is enabled for purposes of website accessibility
Log In Help Join The Motley Fool
Free Article Join Over 1 Million Premium Members And Get More In-Depth Stock Guidance and Research
By Jeremy Bowman - Feb 2, 2018 at 5:44AM

There's no easy answer to the question, but cities continue to line up to host the NFL's marquee event.

Minneapolis is getting all decked out for Super Bowl LII. Hosting the title game for the second time ever, the frigid city has unveiled a slew of themed activities and events leading up to the big game, including a zipline across the Mississippi River, freestyle snowmobile stunts, a life-size snow globe downtown, and a "Super Bowl Experience" featuring virtual reality and autographs from NFL players.

However, as the energy builds toward Sunday's game, locals and others may wonder if all the pomp and festivities are really worth it for the host city. Huge sports gatherings like the Olympics have a reputation as being boondoggles for the host city. Is the Super Bowl any different? 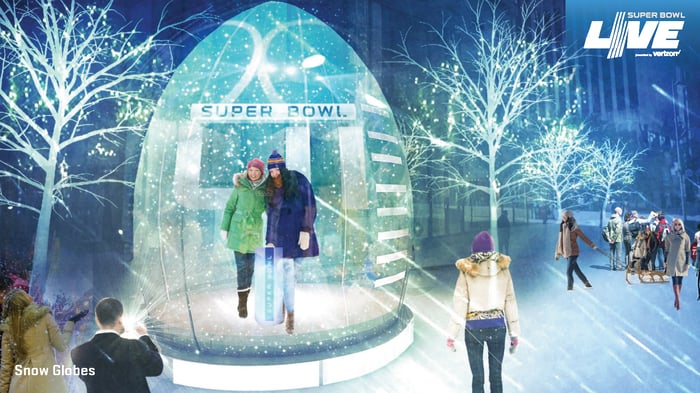 In recent years the NFL has a used a carrot-and-stick approach to choosing the Super Bowl hosts, seeking to entice cities into building a brand-new, state-of-the-art stadiums and then rewarding them with a Super Bowl.  Seven cities have built a new stadium in the last twelve years, and by 2020 all will have hosted a Super Bowl. Los Angeles and Las Vegas are also set to get a Super Bowl when new stadiums open in those cities in coming years.

Taxpayers contribute an average of $250 million to new stadiums, according to the firm Conventions, Sports & Leisure International, and the U.S. Bank Stadium, which opened in Minneapolis in 2016, cost $498 million in state and local taxes, which only covered about half the the stadium's total cost.

Beyond the stadium walls, the NFL's stiff demands continue, calling for 24,000 hotel rooms within an hour of the game site, 35,000 parking spaces, hundreds of buses, taxis and limos, billboards for advertising, and a sales tax exemption for the league and its representatives.

While stadium costs are up front, the actual benefit from hosting football's biggest platform is less clear. According to consulting firm Rockport Analytics, which the Super Bowl host committee hired to provide an economic impact analysis on hosting Super Bowl LII, the Super Bowl will bring an estimated $407 million in new spending to the Minneapolis/St. Paul metro area.   That estimate is based on an expected 125,000 expected visitors and $122 million spent on local game/event operations expenditures. However, Rockport acknowledged that $68 million in regular tourist spending would be displaced, and estimated that the net benefit in GDP would be $343 million, which includes $242 million in wages due to hosting the game. That leads to state and local tax receipts of $29 million and federal tax receipts of $51 million.

Rockport also estimated that those visitors would generate more than 230,000 room nights at local hotels, and spend an average of $620 per day.

Though data wasn't available for the last two Super Bowls, the company found that the three prior Super Bowls had recorded the highest economic impact in the history of the competition, with Super Bowl XLIX in Phoenix delivering a value of $719 million. The trendline is clearly moving up.

According to the numbers above, it would appear that Minnesota taxpayers are losing money on Super Bowl LII. If they spent $498 million and are only receiving a benefit of $342 million, that would put them $166 million in the hole. However, it's disingenuous to look at it that way as the investment in U.S. Bank Stadium was not strictly for the Super Bowl. Unlike the Olympics, which are often plagued by overinvestment in stadiums that soon become useless after the two-week competition, the Vikings will continue to play at U.S. Bank, likely for decades to come, and the stadium can host concerts and other events at other times of the years, adding economic and cultural value for the city.

R.T. Rybak, who was mayor of Minneapolis, at the time the city approved $150 million in taxpayer funding for the stadium, told The New York Times that the deal ended up being a financial bonanza for the city as it led Wells Fargo to build to two new office towers downtown, and sparked a revitalization of the Downtown East area. The stadium deal also unlocked money to operate the convention center downtown and helped fix the Target Arena, where the NBA's Timberwolves play. "I would not have done a deal just for the football stadium," Rybak told the Times, "You don't build a stadium for the Super Bowl."

Beyond the economic impact of hosting the Super Bowl, there's also a psychic benefit to the host city, which is harder to quantify. It's a big party for locals, a chance to show off their city, and it gives them a sense of pride in being on the national, or even global stage. A city like Minneapolis isn't often in the limelight like it will be this weekend, and that feeling often induces locals to spend more money in addition to bringing in tourist spending.

Furthermore, since the Super Bowl showcases the host city and brings in hundreds of thousands of visitors, it can help drive future tourism as businesses and organizations may be more likely to hold conventions there or tourists to return if they have a good experience. Positive word-of-mouth can help in a similar way.

The bottom line is there's no clear answer to whether it's economically worthwhile for a city to host the Super Bowl. The path to payoff is based on economic tack-ons that are hard to quantify and attribute to hosting the big game itself.

Whether or not it's a good deal for cities, it's evident there's still plenty of competition to host the NFL's marquee event. In the last round of bidding in 2016, five cities competed to host three Super Bowls from 2019 to 2021. Atlanta, Miami, and Los Angeles won, while Tampa Bay and New Orleans were shut out. Tampa, however, later replaced LA as the host of 2021 Super Bowl, with Los Angeles moving to 2022.

While new blockbuster stadiums may cost hundred of millions of taxpayer dollars to build, most cities still seem to believe that the cost of hosting a Super Bowl is worth the economic and psychic benefits.