I'm taking a trip Down Under for this versatile software-as-a-service company.

Over the past 10 years, we have witnessed seismic shifts in the workforce. Businesses that rely on one-off purchases, the manufacture of physical goods, and even brand loyalty have stumbled mightily. They have been replaced by software-as-a-service companies.

If this is a foreign concept, consider the massive change Microsoft has experienced. In 2005, you had to buy a CD that contained Microsoft Office (Word, Excel, PowerPoint, etc.) and download it. Anytime there was an upgrade, you had to buy a new CD for hundreds of dollars.

Today, you simply pay a small monthly fee and you can access all Office tools from the cloud. Updates are made in real time; you don't feel the sting as much because your monthly fees are comparatively small. And Microsoft gets to collect more over the lifetime of your relationship.

But the company I'm tapping today isn't Microsoft. In fact, I think its returns can far outpace Microsoft's -- and I'm putting my own skin in the game to benefit from the opportunity. 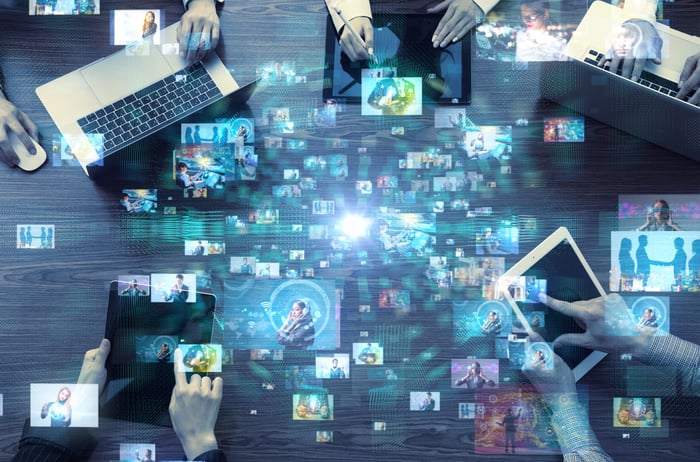 That company is Atlassian (TEAM 1.94%) -- an Australian business that's built a suite of tools that IT, business, and software teams use to communicate and manage workflows. These tools are invaluable to the companies that use them, and the company is building an enormous moat around its free-cash-flow-positive business.

If you aren't familiar with Atlassian -- and few probably are -- here's the overview of the company's main products:

It's worth noting that this isn't an exhaustive list of tools. The company has made a habit of making small acquisitions and rolling them into its suite of offerings. These often complement one another, and are easier to upsell once customers are in the Atlassian ecosystem (more on that below).

The company collects revenue in four primary forms: perpetual licenses that allow companies to download and host software on site (this is relatively rare), maintenance revenue for initial installation and ongoing support, subscription revenue, and "other" sales -- which include the Atlassian marketplace (again, more on that below).

Here's what growth in those segments have looked like over the past three years. 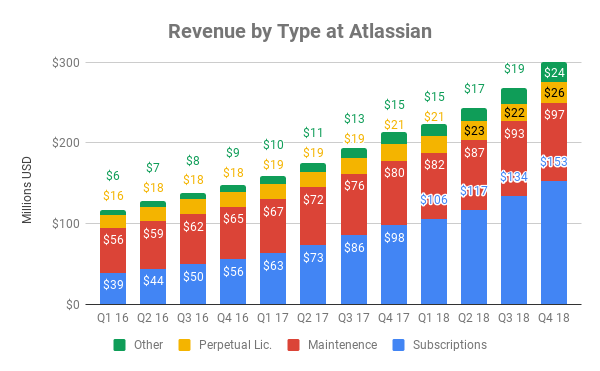 It's worth noting that this growth is by quarter, not year. As I said, subscription revenue is the most important variable to watch: It has the highest margin, benefits from high switching costs, and -- conveniently for shareholders -- is also the fastest growing. Over the past three years, the growth rate for subscription revenue sits at 65%!

None of this would matter, however, if the company didn't have a moat -- or sustainable competitive advantage -- surrounding it. Atlassian has two strong moats.

The first, and most important, is high switching costs. When a company adopts one of Atlassian's products (Jira Software, for example), its employees become accustomed to using the system. This familiarity takes time to develop, and over that time, gobs of data are also stored on the system. The costs in switching to another provider -- not just in terms of actual financial costs, but also in headaches retraining employees, and in the possibility of losing mission-critical data in the process -- would be onerous.

Unfortunately, Atlassian does not offer a metric to help us measure customer retention -- which is admittedly a mark against the company. That said, the continually positive momentum in terms of customer additions should negate this concern a bit.

The other moat -- smaller but growing -- comes from network effects. This is what happens when a tool becomes stronger with every additional user. Atlassian's network effect comes in the form of the Atlassian Marketplace. This is a spot for third-party app developers to build solutions on top of Atlassian's platform.

Because these app developers know Atlassian has over 138,000 customers, they are incentivized to build apps on Atlassian's site -- and not those of up-and-coming competitors. Those apps add incentive for other customers to join Atlassian, which only strengthens the feedback loop.

Atlassian Marketplace opened in 2012, crossed $250 million in cumulative sales in early 2017, and only needed six more quarters to cross $500 million. In fiscal 2018 alone, the Marketplace had $200 million in sales. This will continue to be an important factor in Atlassian's ability to create tools to work with partners and add space between itself and the competition.

The company has also showed impressive resolve at not chasing after opportunities where it's not the top dog. For instance, it had long had a service called HipChat -- think of it as something like old-school AOL Instant Messenger. But that service was losing out to Slack (something we use every day at The Motley Fool), and instead of trying to beat Slack, Atlassian simply decided to team up with the company instead.

While that might have been a painful short-term move, it shows that Atlassian's founders (who are still co-CEOs) are taking the long view. Scott Farquhar and Mike Cannon-Brookes founded the company in 2002, and still own 99% of Class B shares and -- combined --  over 90% of the voting rights.

They've also built a culture that employees appreciate: Reviewers on Glassdoor give the company 4.1 stars (out of 5), the co-CEOs have a 92% approval rating, and 79% of employees would recommend working there to a friend.

Add all these factors together, and I'm excited to buy shares of the company. Although the stock isn't cheap -- it trades for over 60 times trailing free cash flow -- I don't like to quibble on price. I'll be making it at least 2% of my real-life holdings when Motley Fool trading rules allow.

If you're looking for a company with a wide moat, impressive growth, and a culture to back it all up, I suggest you buy Atlassian, too.