UPS (NYSE:UPS) stock is up 5.6% as of 12:25 p.m. EST after the company reported less revenue growth in fourth-quarter 2018 than analysts had predicted -- but stronger profits.

For the quarter, UPS earned  $0.52 per share, while pro forma, its profit landed at $1.94 per share, easily topping analysts' expectations for $1.58 per share in adjusted earnings.

Sales for the quarter were $19.85 billion, falling just short of analyst forecasts for $19.97 billion. 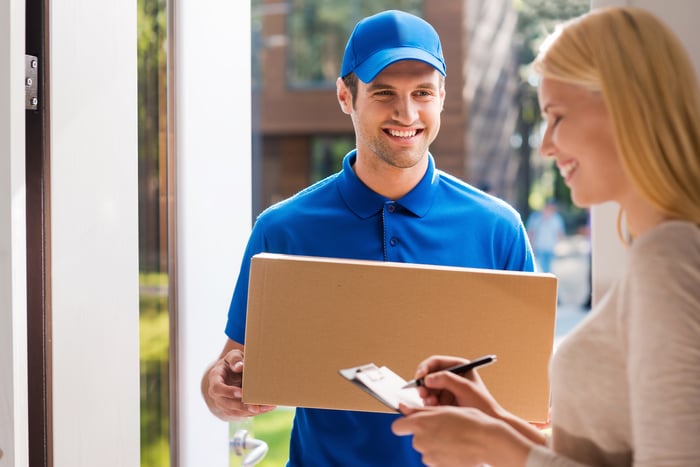 Urging investors to focus on the pro forma number (which is fair -- the difference between pro forma and GAAP results in this instance were due largely to a large pension fund charge caused by stock market volatility in Q4), UPS noted that its adjusted Q4 EPS were up nearly 17% in comparison to last year's Q4, while domestic U.S. revenue rose 6.3% and total revenue growth was 4.6%.

For the full fiscal year 2018, the company earned $5.51 per share on $71.9 billion in sales and generated more than $6 billion in positive free cash flow.

CFO Richard Peretz characterized the results thusly: "UPS executed very well during the quarter in a challenging environment." Going forward, he predicted more of the same, with "substantial increases in operating profit growth in all three [of UPS's] business units."

For fiscal 2019, UPS is predicting it will grow adjusted operating profit growth in the low teens, earn adjusted EPS in the range of $7.45 to $7.75, and spend as much as 10% of revenue on capital investment -- so probably more than $7 billion in capex, and even more than the $6.3 billion it spent in 2018.

Given how well UPS just performed in Q4, however, it seems investors are willing to overlook that investment. I'd expect that to remain the case, as long as the investments in capex keep paying off for the company.