Please ensure Javascript is enabled for purposes of website accessibility
Log In Help Join The Motley Fool
Free Article Join Over 1 Million Premium Members And Get More In-Depth Stock Guidance and Research
By Daniel B. Kline - Updated Apr 9, 2019 at 3:04PM

The chain's Piece of the Pie program will reward you for eating pizza -- any pizza, not just the ones it sells.

Domino's (DPZ 0.02%) has made staging bold stunts a big part of its business model. These have ranged from the silly -- using reindeer to deliver pizza and offering pizza insurance for people who drop their pies -- to mildly more serious efforts like actually paving over potholes for a smoother delivery route and making it so customers can order via social media or text message.

Now the pizza chain has another bold play just in time for the biggest pizza day of the year. The company plans to kick off a new promotion on Saturday, Feb. 2, where it offers customers points in its Piece of the Pie Rewards program for pizzas they purchase from any rival (or make themselves). 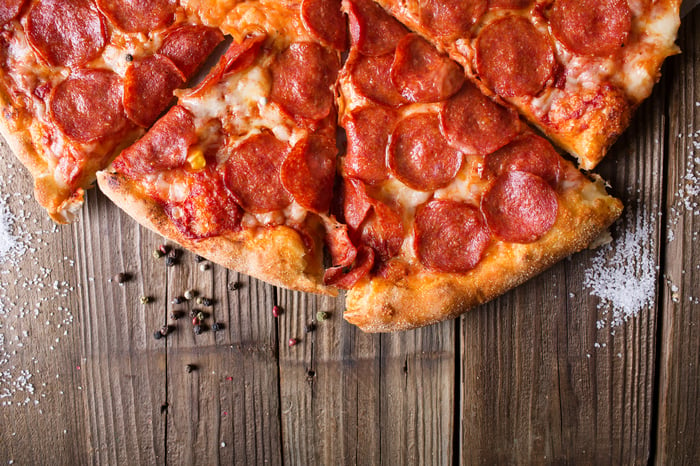 Domino's will offer rewards points for any pizza, not just its own. Image source: Getty Images.

Consumers have to download the Domino's app, register for the Piece of the Pie Rewards program, and then they can use a new artificial intelligence-powered tool to scan their pizza. Once the app identifies the pizza, the customers earns 10 points. It takes 60 points to earn a free medium two-topping pizza from the chain.

"Instead of advertising during Sunday's game, we decided to invest in a breakthrough program that rewards everyone who loves pizza as much as we do," said Domino's Chief Brand Officer Art D'Elia in a press release  "We know everyone is asking themselves, 'Did Domino's just say they will award points for eating ANY pizza? Even from a competitor?' You read that right; oh yes we did!"

The offer begins Feb. 2 and will run for 12 weeks. Domino's will kick off the promotion with an ad featuring its CEO, Ritch Allison, in a non-Domino's pizza restaurant. Those ads will not air during the Super Bowl but will premiere "just in time for the big game," according to the press release.

"We knew that filming this commercial in a pizzeria that was clearly not Domino's would really demonstrate our commitment to awarding points for all pizza," said Kate Trumbull, Domino's vice president of advertising in the press release. "We chose a place that was special to our CEO when he lived in Atlanta -- Antico Pizza, an acclaimed family-owned favorite that puts just as much love into their pizza as we do."

Hype aside, this is a smart play by Domino's. The chain sells nearly 2 million pizzas (and 4 million chicken wings) just on Super Bowl Sunday. This offer allows the chain to benefit from pizza sold by its rivals by getting more consumers to download its app and register for its rewards program.

Once a consumer has downloaded the app and registered for the reward program, they have effectively decided to become Domino's customers at some point. Even if they hold off until earning a free pizza, they will eventually buy from Domino's, which gives the chain a chance to win over new customers.

This is a publicity stunt but it's a very smart one. Domino's will not only get a lot of attention, it should add registered users who eventually at least try its product.