Please ensure Javascript is enabled for purposes of website accessibility
Log In Help Join The Motley Fool
Free Article Join Over 1 Million Premium Members And Get More In-Depth Stock Guidance and Research
By Tim Beyers - Updated Apr 24, 2019 at 10:08AM

With the real estate market cooling noticeably, is now the time to go bargain hunting for real estate stocks? Certainly, if you're thinking about Redfin (RDFN 11.46%). However, I wouldn't be buying Zillow Group (Z 6.24%) (ZG 6.82%) right now. Here's why. 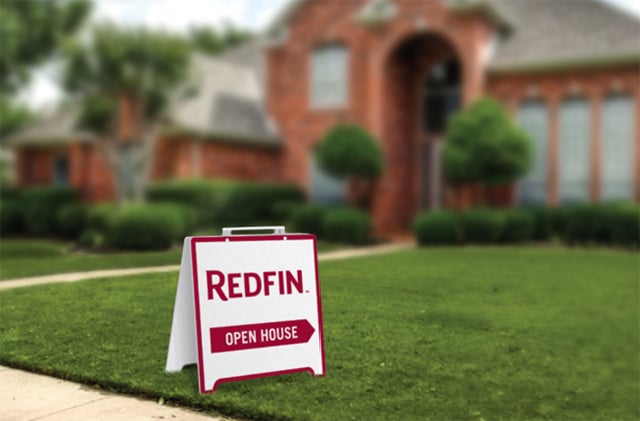 ... The market. Residential real estate is a tough market in a lot of ways. You can see it in data from both Redfin and Zillow. Let's start with the Redfin data shown in the graphic below. The move up across metros is significant in that it reveals a pattern of home sellers dropping prices more aggressively in recent years. 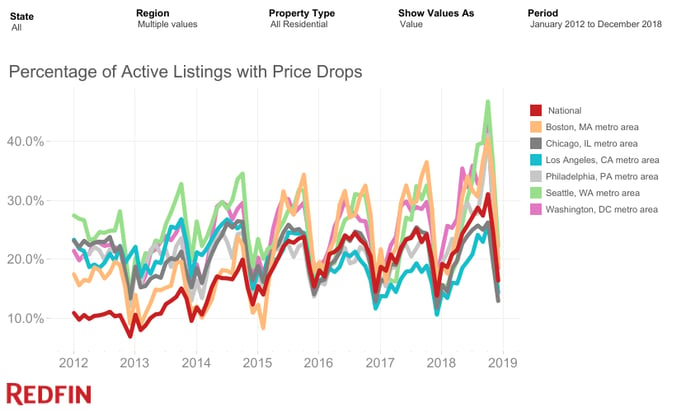 Zillow has similar data. According to its most recent coverage of home values, 77 of the 782 metropolitan areas the company covers -- or 9.8% -- saw a quarter-over-quarter decline in the three months ending in December. The same report shows 102 metros with sequential monthly value declines and 21 with year-over-year drops in average home value. Most signs point to residential real estate becoming a buyer's market, which can be bad for realtors, who tend to be in greater demand when it's time to sell.

2 reasons why Redfin is the better buy

I'm not saying Redfin is the better buy for a down market. Both Redfin and Zillow stock have taken hits over the past 12 months as the residential real estate market has slumped, and that pattern could continue for the foreseeable future.

Redfin and Zillow have trailed the market over the past year. Source: S&P Global Market Intelligence.

So why buy Redfin now? Homes are still a part of the American infrastructure, and it's a reasonable bet that the residential real estate market will endure and improve over time. Redfin, in my view, is better positioned to benefit from a recovery and from long-term trends that favor liquidity in the real estate market overall. The company's superior management and careful capital allocation strategy make for a winning combination.

Three things set Redfin apart. First, the company has salaried agents. So instead of paying lofty commissions, the company passes on the savings to buyers and sellers; listing fees are just 1%, and overall transaction fees tend to be materially lower than the 6% that's become an industry standard.

Second, Redfin is tech-driven and uses a ton of data to experiment with different ways to add liquidity for residential homeowners and home shoppers. For example, the company spent a year testing its "RedfinNow" instant buyer (iBuyer) program wherein sellers actually sell to Redfin, which cleans up the home, carries it as inventory, and then resells it at the best possible price, pocketing the profit. (Think of it as a larger-scale roll-up of the house-flipping biz that's crowded reality TV in recent years.) By testing the process, Redfin was able to identify opportunities strategically and collect a profit on all 17 of its first sales. There's reason to believe this business will be a meaningful driver of profits in the next two to three years and beyond.

Third, Redfin is expanding nationally, which positions the company to partner with customers on an unprecedented scale. How? By consolidating the tasks involved in buying a new home and selling an old one (i.e., listing, appraisal, title, loan origination, inspection, etc.). Consolidation creates liquidity for customers, who, in theory, are willing to trade some profit on the transaction for the added convenience.

Think of if this way: You could pay 6% for selling a home with a traditional realtor and still be stuck with most of the work of cleaning up your home, arranging financing, and everything else that goes into buying and selling a home, or you could pay 7% plus loan fees to Redfin and have cash for your home in a few days -- all while retaining a partner for finding your next place. Redfin believes consumers will pay up for added value, and I think they're right.

Superior management doesn't make an investment thesis, but it certainly helps it along. In the case of Redfin CEO Glenn Kelman, there's no doubting where his passion lies. From a recent interview on the Corner Office podcast:

I started a software company with a couple other folks, it went public, we made plenty of money. And I thought it was this incredible mission but in fact, we sold software to...companies that didn't necessarily do good things. And at the end of it, all these people who I thought were my brothers in arms, where I thought we were doing something beautiful, actually it was just all about the money. And the deal that I made with my family and myself is that I was never going to do that again.

Redfin, which he joined as CEO in 2005, is Kelman's second act. He's got plenty of skin in the game as owner of 2.2% of the company's shares outstanding.

And he and his team take seriously the responsibility of acting ethically and truthfully. The company has fired partner agents in the past for faking customer reviews, for example, and then copped to the scandal publicly -- before anyone was asking questions. Why do that? To ensure that only the most ethical and customer-centric brokers choose to work with Redfin. The company also refuses to try and spin its earnings and revenue forecasts by conflating revenue from its brokerage business with that of its new RedfinNow iBuyer program, saying in a recent conference call that to do so would be "cheating."

Check out the latest Redfin an Zillow earnings call transcripts.

Zillow has its merits -- the Zestimate is consumers' go-to for valuing a home -- but there's something missing in the business model. Instead of helping create liquidity in the market, Zillow is instead selling leads based on Zestimates to realtors who then try to convince sellers they're unlikely to get a bid equal to or even near the Zestimate.

There's a tension inherent in the relationship, as if buying leads from Zillow is necessary but (at best) undesirable to most realtors. And while Zillow has its own instant buying program, as do other realtors, the company risks further alienating customers by selling leads in regions where it's also soaking up transactions that would otherwise go to realtors. Competing with people you depend on to pay the bills is a risky strategy.

Nevertheless, Zillow continues to be a massive source of traffic when it comes to searching for homes on the web. So long as that's true, realtors will continue to pay for leads and to advertise on the site. That strikes me as more of a tax than it is a genuine breakthrough that provides much-needed liquidity to the residential real estate market.

Redfin, for its part, may fail at becoming the primary source of liquidity for America's homebuyers and -sellers. But in doing the hard work of trying to reach that plateau, the company has a chance to change the market -- and make a fortune for investors in the process. As a shareholder, I'm willing to take that bet.