An ambitious streamlining plan is arriving ahead of schedule.

Shares of Union Pacific Corp. (UNP -2.32%) gained 15.1% in January, according to data provided by S&P Global Market Intelligence, after a strong fourth-quarter performance gave investors confidence the railroad is on track to deliver in 2019.

Union Pacific reported fourth-quarter earnings of $2.12 per share, up 39% over a year prior and ahead of analyst consensus for $2.06 per share in earnings. Revenue grew 6% to $5.76 billion, and operating income was up 8% to $2.21 billion, also topping expectations.

Union Pacific is in the early stages of implementing precision scheduled railroading, an operating philosophy designed to make railroads more efficient that was pioneered in Canada and is now making its way to U.S. companies. Union Pacific hired Canadian National (CNI -1.69%) vet Jim Vena as chief operating officer in early January and put him in charge of the overhaul. On a conference call that followed the earnings announcement, management suggested that the company is moving faster than expected in bringing down costs. 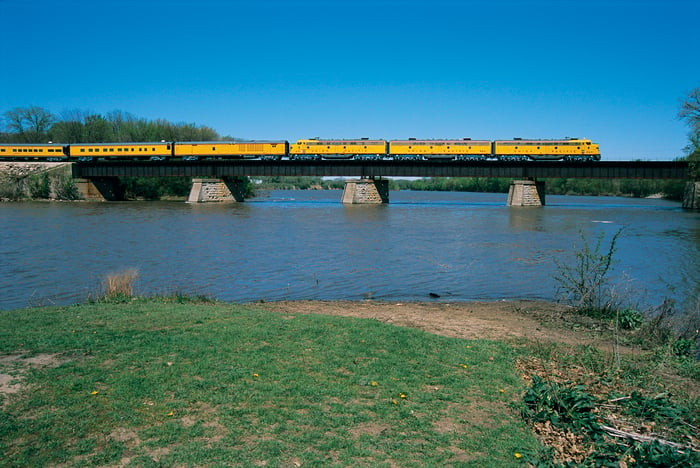 The company has put 1,200 locomotives into storage since last August, allowing it to increase locomotive productivity by 7% while at the same time increasing quarterly volume by 3% year over year.

Management expects Union Pacific's operating ratio -- a measure of total expenses relative to its revenue -- to fall below 61% in 2019 and below 60% by 2020, putting the company in line with the industry's best operators.

Management expects overall rail volume to increase by low single digits in 2019, with pricing that should outpace expense growth. With Vena new on the job, it might be too much to ask that UNP see dramatic improvements from one quarter to the next, but the healthy operating environment coupled with the push to boost productivity should set the company up to beat or even exceed expectations for 2019.

It's not too late to climb aboard Union Pacific.