Insurance stocks don't get the attention they deserve. Over history, some of the best-performing stocks of all time have been nothing other than slow-growing and otherwise boring companies that make their money insuring everything from contact lenses to cars and even other insurance companies.

Below, three Fool.com contributors make the case for Everest Re (NYSE:RE), Aflac (NYSE:AFL), and The Travelers Companies (NYSE:TRV) as insurance companies to add to your portfolio.

One of the leaders in the space and one of the insurance stocks on my radar right now is Everest Re. The stock has underperformed over the past couple of years thanks to its significant losses related to 2017 natural disasters.

Despite the recent underperformance, Everest Re is a well-run business that should do just fine in the years to come. The company has one of the top credit ratings in the industry (A+/A1) and has the lowest debt-to-capital ratios among its peers. And Everest has a geographically diverse business: 55% of its revenue comes from the U.S., but it also has large European and Latin American operations.

Everest Re also has an excellent track record of performance. Since 2013, Everest has increased its gross written premium by roughly 40%, and the first three quarters of 2018 show that this trend should continue. The company has produced a 10-year average combined ratio of 93.9%, indicating a strong underwriting profit. As a result of this strong profitability plus its investment returns, Everest Re has delivered 11% annualized total returns to shareholders since 1995, beating the S&P by a total of 765 percentage points over that period. 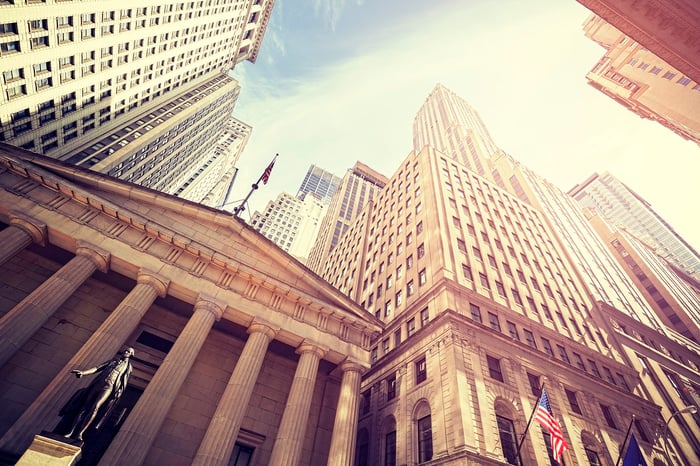 You won't stop quacking about this insurance stock

Dan Caplinger (Aflac): Most insurance companies offer products that are relatively similar to each other, making it hard to differentiate one insurer from another. That's especially true in the healthcare field, where most customers are interested in getting coverage to pay for their hospital, medical, and prescription drug needs. However, Aflac has chosen a different route, focusing instead on supplemental insurance coverage that most other providers don't offer. With tailor-made coverage to cover costs of specific types of diseases as well as options to receive additional money in the event of an accident or short-term disability, Aflac stands out from the crowd.

Another nice feature for Aflac shareholders is the company's history of boosting its dividend payments regularly. With a 2.2% dividend yield, Aflac has an above-average payout, and the insurer came into 2019 with a 36-year streak of annual dividend increases. Investors might not get the same 16% payout hike they got in 2018, but an extra 5% to 6% over last year's figure is a distinct possibility for the insurer. Aflac has been generous with dividends over the long run, and conditions in the insurance field both in the U.S. and in Japan -- where the company does the bulk of its business -- are encouraging for its future.

Jordan Wathen (The Travelers Companies): Few people know insurance quite like Warren Buffett and Berkshire Hathaway, a conglomerate built on the backbone of well-run and highly profitable insurance companies. It's notable to me that Berkshire went back to a familiar well in the third quarter of 2018, buying shares of The Travelers Companies, an insurance stock it had earlier owned, and sold, during the mid-2000s.

Bear in mind that there is a very high bar for Berkshire to buy insurance stocks. It can invest in the insurers it already owns at book value and avoid all the tax inefficiencies associated with holding a small stake in a publicly traded company. For that reason, any public insurance stock has to be truly exceptional for an investment to make sense for Berkshire.

Of course, Travelers is an exceptional insurance company. It consistently generates underwriting profits in commercial and personal insurance lines, a rarity in the industry. Its outperformance can be attributed to a conservative underwriting culture and management's focus on shareholder returns. The company delicately balances the trade-off of writing more insurance or buying back stock. If buying back stock offers a better return, it isn't afraid to pull back on growth and aggressively repurchase stock on the open market.

This opportunistic approach has served shareholders well. In a four-year span following the financial crisis, Travelers bought back more than a third of its stock at low prices. Over a longer period of time, since 2008, Traveler's share count has declined by approximately 58%. The net effect is that 100 shares today represent as much ownership of the business as roughly 237 shares a decade ago.

Travelers' slow-and-steady approach to creating value for shareholders should continue for a long time to come, powering returns in excess of the insurance industry average along the way.