You may want to learn about this under-the-radar bank stock.

The banking industry is often thought of as highly competitive, with little differentiation among the players. Nevertheless, some banks can outperform their rivals, thanks to better underwriting, superior service, identifying unique niche markets, or superior cost-controls.

Ever since the financial crisis of 2008, Forbes has compiled an annual list of the 100 Best Banks in America, tracking a variety of financial measures regarding growth, profitability, and credit quality.

Guess what? A bank you might never have heard of just won the award... for the second year in a row. Even better? Thanks to the sectorwide sell-off, this stock trades at a bargain valuation. 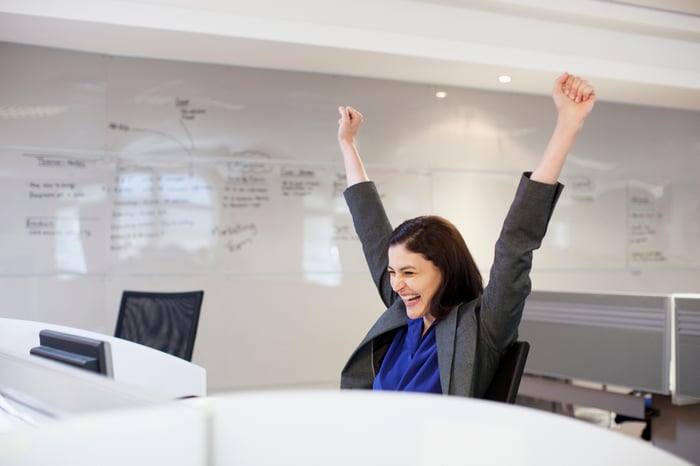 Home BancShares (HOMB 2.85%) is an Arkansas-based bank run by founder and chairman Johnny Allison. Founded in 1999, the company has grown, mostly via 23 acquisitions, to $15 billion in assets, with major operations in Arkansas, Florida, and Alabama, along with a branch New York City.

Home BancShares scored in the top 15 in six of the 10 metrics calculated by Forbes. In particular, the company's 37% efficiency ratio (noninterest expenses divided by net revenues) is particularly outstanding, compared with the median of 59% for the top 100 banks.

Forbes also praised the company's 28% revenue growth; however, that was mainly due to acquisitions. In 2017, the company made three acquisitions, including the large purchase of Florida's Stonegate Bank. In June 2018, the company purchased Shore Premier Finance, which provides loans for high-end sailboats and powerboats.

Still, Home BancShares has clearly found a way to operate its acquisitions in an accretive, highly efficient manner. Part of that lies in the company's decentralized operating structure and focus on costs. On its recent conference call with analysts, CEO Randall Sims illustrated how this philosophy emerged out of a company project in the early 2000s: "We concentrated one year on an efficiency project that changed the way we operate, resulting in a model of management and a leap in profitability, and we have stuck to those principles today."

Despite the award, Home BancShares stock has declined about 25% in the past year, and trades for an extremely low multiple of 10.5 times earnings.

Why the pessimism? For one, Home BancShares isn't alone -- the entire banking sector has been pummeled due to a flattening yield curve, and worries that we are late in the economic cycle.

To be sure, some of that has merit. In Q4, Home BancShares' net interest margin declined from 4.47% to 4.36% year over year, and its efficiency ratio ticked up from 37.4% to 38.3%. Last year's fourth quarter was skewed by hurricanes and the Tax Act, but more recently, the company's return on average equity declined from 13.74% in the third quarter to 12.05% in the fourth.

Nevertheless, I think these declines are more noise than anything else. All banks have had their costs of funds go up as the Fed has hiked interest rates. That's squeezed margins, as banks still have a mix of newer (higher-rate) and older (lower-rate) loans on their books. Home BancShares made new loans last quarter at an average rate of 6.07%, but legacy loans rolled off the books at an average of 5.50%. The Federal Reserve seems as if it's going to pause on rate hikes, which should allow banks to replace their loan balances at higher rates and "catch up" to deposits. So, I think Home BancShares' margins should stabilize in the year ahead.

Allison also chimed in with some colorful words regarding the current investor mood surrounding bank stocks:

The market has been so crazy that the piling-on effect has driven down bank stocks to the lows of early mid-80s ... the good ones have been treated worse than the bad ones because they had more room to drive those down. I've bought more bank stocks personally in the last two to three weeks than I've bought in many, many years. It's not a fact. It's -- it's almost a dartboard, you could draw one out of -- out of the bowl.

Not only is Allison -- a proven successful acquirer -- personally buying bank stocks, but Home BancShares is also investing in itself. During Q4, the company purchased 3.44 million shares of its stock, good for about 2% of shares outstanding -- a pretty big number for a single quarter. After earnings, the company announced a five-million-share increase to its buyback authorization to 9.9 million shares, and raised its quarterly dividend by 9.1% to $0.12 per share, roughly a 2.6% dividend yield at today's prices.

A lot of bank stocks seem like bargains at today's prices, so why not give Forbes' number one bank of 2018 a look? It's as cheap as any other, and its CEO – a proven, successful bank investor -- is putting his money where his mouth is.