Trucking-related stocks did well in January, but, as ever, they're subject to the whims of investor speculation over peak production.

Shares of truck manufacturer PACCAR (PCAR 1.58%) rose 14.7% in January, according to data from S&P Global Market Intelligence. It was a strong month for the trucking sector overall, with Navistar (NAV), Meritor (MTOR), and Dana (DAN 2.03%) all rising more than 20%. The move in January represented another turn in the bear-and-bull debate that's raged over the trucking sector in the past year.

The key battleground is the outlook for heavy-duty truck orders. Trucking is a highly cyclical industry. Earnings soar when orders turn upward and collapse when the market turns down. Of course, investors always try to anticipate the cycle, and even though Meritor, PACCAR, and Navistar raised their 2018 forecasts for heavy-duty truck sales through the year, it hasn't stopped the market speculating that 2019 will mark a peak in the cycle. 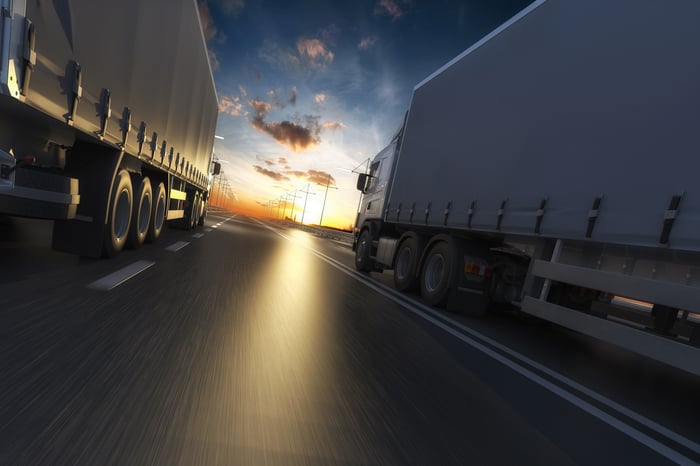 PACCAR's fourth-quarter earnings in January showed the company delivering a record number of trucks, and expectations are for even higher deliveries in the first quarter of 2019, compared with the last quarter of 2018.

Regarding the general outlook for 2019, Meritor, Navistar, and PACCAR have all given guidance implying moderate growth in North American heavy-duty production, but heavy-duty truck order data has been indicating steep declines from previous years. 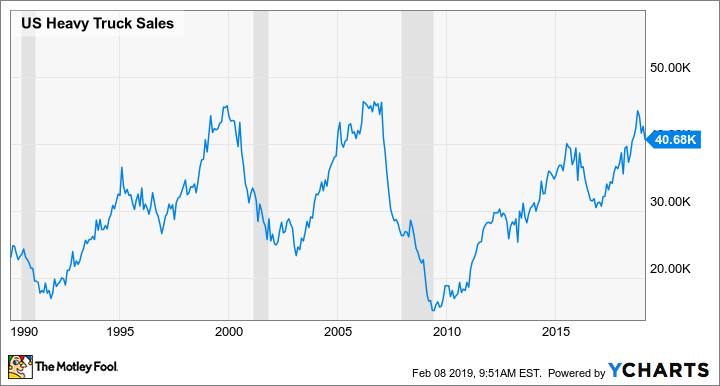 Welcome to the wonderful world of investing in the highly cyclical world of investing. In theory, shares should be priced on long-term earnings and cash flow generation while ignoring the cyclical ups and downs. In practice, stock prices tend to violently overshoot in both directions, and trying to guess the peaks and troughs in the cycle is almost impossible for most investors.

For example, look at what happened in 2016. As soon as truck sales peaked at the end of 2015 and then declined sharply in 2016, the stocks in the sector started to appreciate significantly. 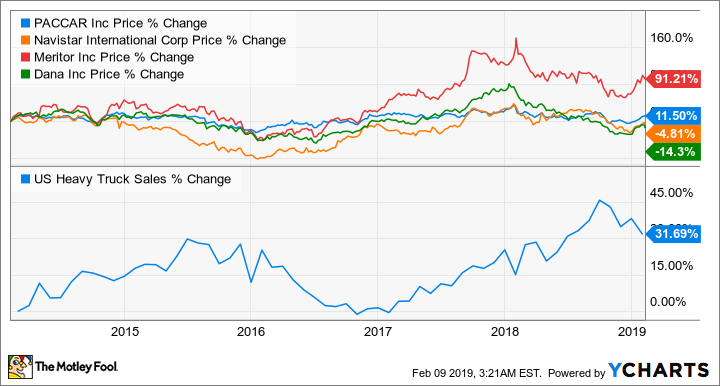 PACCAR is down only 1.5% year over year, compared with more than 20% declines for the others mentioned here. The question is what to do with that information. After it's clear that peak production has passed, history suggests that investors will start buying. But long-term investors who believe in the future of trucking won't be troubled by the violent upswings and downswings, or by the game of trying to pick the cyclical peak and buying in after the fact, in anticipation of a new upcycle in a year or two.

For other investors, given the year-over-year declines in the stocks discussed here, don't be surprised if these stocks continue to decline even as PACCAR and others give guidance calling for moderate production growth in 2019.