Will tough comps and ongoing weakness in China sink the machine-vision specialist's results this quarter?

Even as investors were prepared for muted financial results from Cognex (CGNX -0.77%) last quarter, they were still hoping for the best. It turned out that the quarter was exactly as management had predicted, with double-digit declines on both the top and bottom lines, the result of tough comps. The company signaled its continued confidence by increasing the dividend and initiating a new stock buyback program.

Shareholders will be keeping an eye on the results, as Cognex is scheduled to release its financial results for the fourth quarter after the market close on Thursday, February 14. Let's recap the company's third-quarter results and management's forecast to see if it provides any insight into what investors can expect when Cognex reports earnings. 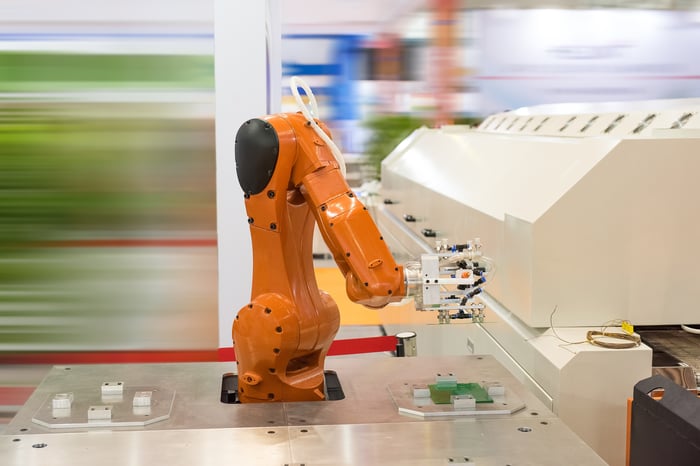 Tough comps from a record quarter

For the third quarter, Cognex generated revenue of $232 million, which was a decline of 13% year over year, although it beat both analysts' consensus estimates and the high end of management's guidance. Profits were similarly muted, with net income of $80 million, down 22% compared to the prior-year quarter. This resulted in adjusted earnings per share of $0.39, down 24% year over year, but again surpassing expectations.

It's important to note that the declines were the product of record results in the prior-year quarter, driven by higher-than-normal levels of investment by Cognex's OLED display and smartphone manufacturing customers, causing tough comparisons.

Cognex continued ramp up its research and development (R&D) spending while increasing its sales force, resulting in temporary headwinds, but management is banking on this leading to long-term growth for the company.

Management signaled to investors that it continued to have confidence in the company's long-term prospects by increasing its quarterly dividend to $0.05 per share, up from $0.045 previously, an increase of 11%. Cognex also added a $200 million share repurchase authorization to offset the dilution caused by the company's equity incentive plan.

For the fourth quarter, Cognex forecast revenue in a range of $180 million to $190 million. If the company achieves these goals, the results would be flat to an increase of about 5% year over year. This is lower than Cognex's long-term growth target, as the company is anticipating lower spending from customers in China and tough comps resulting from the high level of investment last year by large OLED display and smartphone manufacturers.

Cognex is also projecting gross margin to be in the mid-70% range for the quarter and operating expenses that are essentially flat compared to the $95.5 million the company spent last quarter.

It's difficult to anticipate what will happen -- particularly because the ongoing trade war with China makes it difficult to gauge the level of impact on spending from the company's Chinese customers. If things aren't as bad as anticipated, the stock could soar, but if things are worse than Cognex has forecast, the price could plunge.

Either way, the stock could make a big move when Cognex reports earnings after the market close on Thursday, February 14.

Why Cognex, NCR, and Xilinx Stocks Surged Higher on Friday
413%