Please ensure Javascript is enabled for purposes of website accessibility
Log In Help Join The Motley Fool
Free Article Join Over 1 Million Premium Members And Get More In-Depth Stock Guidance and Research
By Ashraf Eassa – Updated Apr 11, 2019 at 10:00AM

The software giant looks like a good investment for the long haul.

Today, Microsoft isn't a small, scrappy company on its way to hitting it big -- it's a hugely successful behemoth that also happens to be one of the most valuable companies on the planet.

The question you might be asking yourself today, then, is whether Microsoft can still be a "millionaire-maker" stock. The answer to that is "It depends!"

Let's dive more deeply into that.

What are you starting with?

Even though Microsoft is already large and successful, I think the odds are good that the company can -- as long as management continues the pattern of smart decision making that it's exhibited since CEO Satya Nadella took the reins -- continue to deliver value to shareholders in the form of meaningful capital appreciation as well as a growing dividend. 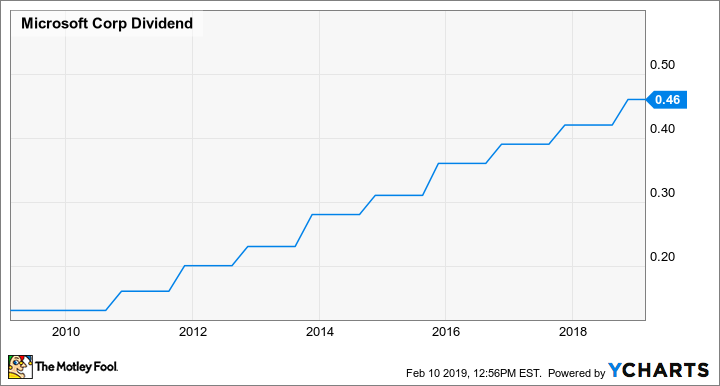 After all, the PC market that Microsoft is exposed to via its Windows operating system is showing signs of stabilizing. It's riding the cloud computing wave as one of the top providers of cloud computing services, and its Office family of products continues to enjoy sales growth, and the company is also a major player in the world of gaming. Microsoft plays in many great markets and has enviable positions in many of them.

With that being said, while Microsoft's stock has returned about 18.6% over the last year and more than 180% over the last five years, those rates of return are by no means guaranteed going forward, especially considering that Microsoft now needs to deliver growth from a market capitalization of about $810 billion rather than from roughly $300 billion.

So, whether Microsoft can be a "millionaire-maker" stock really depends on how much you're starting off with. If you put $10,000 into Microsoft today, is your investment likely to top $1 million within, for example, the next 20 years? Probably not. However, if you're starting with a significantly larger initial investment -- say, $500,000 or so -- then I think the odds are pretty good that you'll be able to at least double your money over the next 20 years by owning the stock and reinvesting the dividends, making you a millionaire.

Microsoft as a wealth protector

If you're looking to "get rich" in the stock market with a relatively low amount of initial capital and you're willing to take on a relatively elevated risk profile to get there, Microsoft probably isn't the stock for you.

However, if you're starting with a significant amount of capital already, then Microsoft -- which, as a market-leading company with a collection of great businesses and products, throws off a lot of cash, returns a hefty sum of that to investors through a dividend program, and has capable leadership -- could be a stock that's not only a good way to safeguard your wealth but to extend it at relatively low risk.