Please ensure Javascript is enabled for purposes of website accessibility
Log In Help Join The Motley Fool
Free Article Join Over 1 Million Premium Members And Get More In-Depth Stock Guidance and Research
By Lee Samaha – Updated Apr 23, 2019 at 10:40AM

Shares of the equipment manufacturer and toolmaker rose sharply in January only to give back gains in February.

Shares in tool and equipment manufacturer Snap-on (SNA -1.12%) rose 14.2% in January, according to data provided by S&P Global Market Intelligence. However, it would be remiss not to point out that the stock slumped after a disappointing set of fourth-quarter earnings released in the first week of February.

It's interesting to compare its stock performance with its peer Stanley Black & Decker (SWK -1.48%). Both stocks are now up around 5% in 2019 on a year-to-date basis, after having a strong run to mid-January. The difference between the two is that Stanley Black & Decker gave earnings in January, promptly slumped, and then recovered. Meanwhile, Snap-on stock stayed strong until its earnings caused a sell-off.

It's never a good idea to try to read too much into short-term stock price movements, but it's clear that the market was willing to buy many of the cyclically exposed stocks that had been aggressively sold off in the last six months. 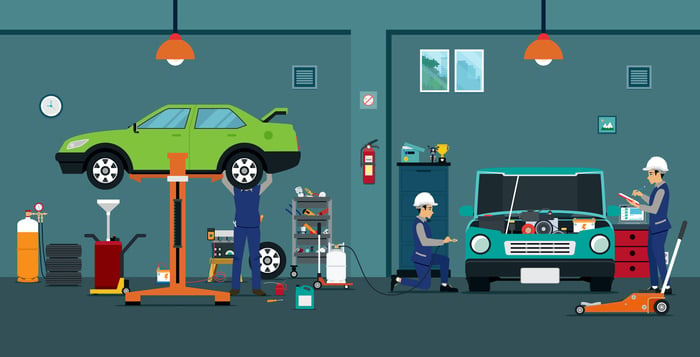 The reason such stocks have been sold off can be seen in Stanley Black & Decker CEO Jim Loree's commentary on his company's end markets "concurrent with the interest rates increases that were being implemented by the Fed. And we saw the same thing in automotive as well, the interest-rate-sensitive type markets, housing, automotive, impacted by rising interest rates."

In the case of Snap-on, it's largely about the automotive end market. Therefore, it was no surprise to see the company experience what CEO Nicholas Pinchuk characterized as "turbulence" in its fourth quarter. In fact, organic sales declined 0.6% in the quarter and gross profit declined to $457.4 million from $465.6 million in the same quarter last year.

Pinchuk's commentary on end markets during the earnings call outlined a "favorable" repair environment, but "in the areas serving vehicle OEMs and dealerships, we have seen some pause. We think that's likely associated with a multiple forecast for lower new car sales." For reference, OEMs are original equipment manufacturers, or in plain English, automotive manufacturers.

Pinchuk's comments characterize the key consideration that investors need to make about Snap-on in 2019. Light-vehicle sales are turning down cyclically, and this is obviously hurting demand at OEM dealerships. However, slowing care sales are usually accompanied by an increase in the average age of light vehicles in the U.S. -- and this can be good for the repair market in the same way that auto parts retailers tend to do well in a recession.

It looks like Snap-on investors will spend much of 2019 hoping the latter will offset any weakness in the former.