The beauty product maker’s blemishes are still tough to ignore.

Coty's growth was weak, but it surpassed Wall Street's low expectations. A tender offer by JAB Holdings, which would boost its stake in Coty from 40% to as much as 60%, also gave the stock another post-earnings boost.

Meanwhile, value-seeking investors likely noticed that Coty trades at just 15 times forward earnings and pays a forward dividend yield of 5%. Let's take a closer look at Coty to see if it's an undervalued dividend stock.

How sustainable is Coty's dividend?

Coty started paying annual dividends in 2013, and switched to quarterly payments in 2016. However, Coty hasn't raised that dividend over the past two years.

Coty's earnings- and free cash flow-based payout ratios were negative over the past 12 months due to its lack of GAAP profits. On a non-GAAP basis, its dividend payments used up 81% of its EPS over the past four quarters. Looking ahead, the dividend would account for 77% of its estimated non-GAAP EPS this year.

During last quarter's conference call, CFO Pierre-André Terisse stated that the company had "no intention to touch the dividend." However, Coty's past actions also indicate that it won't raise its payout anytime soon.

Instead, Coty's top priority is to extinguish the debt it accumulated after its acquisition of P&G's (PG -1.90%) portfolio of beauty brands in 2016. Coty reduced its total debt by $179 million sequentially during the second quarter, but that only reduced its debt pile slightly to $7.91 billion.

How healthy is Coty's business?

Coty's dividend yield is high because the stock was nearly cut in half over the past 12 months. That decline was caused by a streak of earnings misses, which were caused by supply chain issues, lower sales of consumer cosmetics amid department store closures, and competition from stand-alone brands like Ulta Beauty and LVMH's Sephora. That decline indicated that its purchase of P&G's brands wasn't paying off.

On the bright side, the softness of its Consumer Beauty segment was partly offset by the growth of its Luxury and Professional businesses in the second half of 2018.

But in the first half of 2019, the growth of the company's Professional brands also decelerated, leaving the Luxury business as its single pillar of growth. During the second quarter, Coty's Consumer revenues accounted for 39% of its top line. Luxury and Professional brands generated the remaining 40% and 21% of its revenue, respectively.

Coty is gradually pivoting its business away from its slower-growth, lower-margin consumer brands toward its higher-margin luxury and professional brands. That strategy boosted its adjusted gross margin by 50 basis points annually to 62.1%. 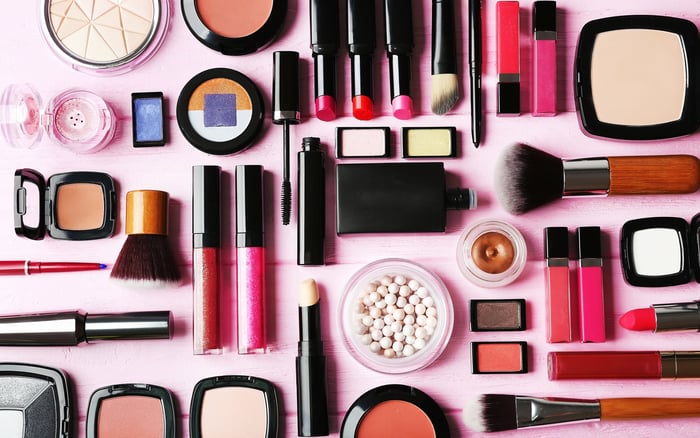 Global demand for Coty's products remains soft. Its reported revenue fell across all three of its main regions -- North America, Europe, and ALMEA (Asia, Latin America, Middle East, and Africa) -- but rose on an organic basis in North America and ALMEA.

Coty didn't provide any clear forecasts for the full year. It expects a "profit trend recovery" in the second half with positive FCF, but it also expects its adjusted operating income to be "moderately below" last year's levels. Analysts expect its revenue and non-GAAP earnings to both decline 6% this year.

Stick with other dividend stocks

Coty's stock is cheap, and its yield is high for clear reasons: Demand for its core products is weak, the P&G purchase merely amplified its problems and debt, and it still hasn't resolved its supply chain problems. Coty also went through four CEOs over the past five years.

P&G, which trades at 21 times forward earnings and pays a 3% dividend, is arguably a better buy than Coty. It's generating positive revenue and earnings growth, has a better diversified business, and generally fares better than most stocks during market downturns.