In a press release, CFO Amy Shapero said, "With our focus on helping entrepreneurs everywhere, including those within the enterprise, launch their businesses and grow them, in 2018 we reached a billion orders cumulatively, and saw the highest-ever mix of merchants join the platform from outside our core geographies."

The company's merchant solutions revenue, meanwhile, surged 63% to $210.3 million, fueled in part by the growth of Shopify Shipping -- which saw its merchant utilization rate improve to 40% at year end -- and Shopify Capital, which issued 81% more loans and cash advances to merchants in the fourth quarter.

"We made history in 2018: No other SaaS company has crossed the $1 billion revenue mark at a faster growth rate than Shopify has," CEO Tobi Lutke said. "This milestone is significant due to the backdrop: Shopify allows people to partake in the entrepreneurial world who would otherwise not be able to do so."

Many of these entrepreneurs are achieving success with Shopify. The total amount of sales made by all the merchants on the commerce platform -- which Shopify refers to as gross merchandise volume -- soared 54% to $14 billion.

"Our merchants had an incredible fourth quarter, and we are energized by their success," Shapero said. 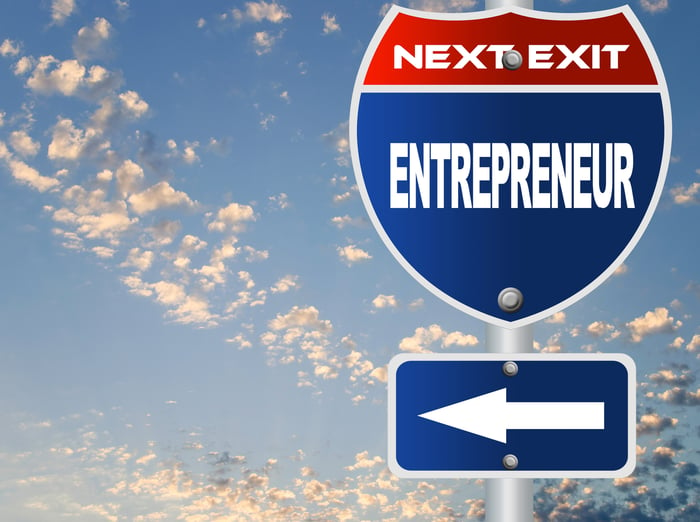 Shopify is becoming a go-to e-commerce platform for entrepreneurs around the world. Image source: Getty Images.

Shopify also saw its non-GAAP operating margin improve during the quarter. Adjusted operating income -- which excludes stock-based compensation expense -- increased to 6% of revenue, or $20 million, up from 5% of revenue, or $11.6 million, in the year-ago period.

Still, Shopify remains unprofitable on a GAAP basis. The company generated a GAAP operating loss of $9.5 million, versus a loss of $6.1 million in the prior-year quarter, as it continues to prioritize expansion over short-term profitability.

Management believes there is much more growth to come for Shopify, as can be seen in its financial guidance for 2019. The company expects:

"We look forward to expanding our footprint even more in 2019 as we continue to bring more product innovation and more value to merchants of all sizes around the world," Shapero said.